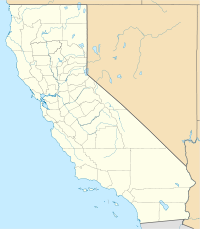 For the civil use of this facility after March 1994, see San Bernardino International Airport

For the vast majority of its operational lifetime, Norton was a logistics depot and heavy-lift transport facility for a wide variety of military aircraft, equipment and supplies as part of Air Materiel/Air Force Logistics Command (1946–1966), then as part of Military Airlift/Air Mobility Command (1966–1994).

Major secondary missions of Norton Air Force Base was as Headquarters Air Defense Command for Southern California, during the 1950s and 1960s. The Air Force Audio-Visual Center produced a wide variety of Air Force films for training and public relations. The Air Force Now film, shown at all monthly Commander's Calls at Air Force Bases around the world was produced at Norton. Norton also hosted numerous Air Force Reserve transport units. The Office of the Inspector General was also located at Norton, as was the Directorate of Aerospace Safety.

Norton AFB was closed as a result of Base Realignment and Closure (BRAC) action 1988 in 1994.

Norton Air Force Base was named for San Bernardino native Capt. Leland Francis Norton (1920–1944). While attacking a marshaling yard on his 16th combat mission, Captain Norton's A-20 Havoc was struck by antiaircraft fire on 27 May 1944 near Amiens, France. After ordering his crew to bail out, Captain Norton perished with his Havoc. His portrait hung in the Officers' Club until base closing.

Norton Air Force Base began before World War II as Municipal Airport, San Bernardino under Army Air Corps jurisdiction. During the summer of 1941 it became a training base to meet the needs of the 30,000 Pilot Training Program. In December 1941, within days after the attack on Pearl Harbor, combat-ready fighter planes arrived to protect the Los Angeles area from enemy attack

On 1 March 1942, the airport was renamed San Bernardino Army Air Field and the San Bernardino Air Depot was established there. The first aircraft arrived at the new base on 2 June 1942. All runways were completed by December and night flying was initiated in March 1943. During the war, Norton's primary function was the repair and maintenance of aircraft. At the end of the war, the base became a processing and separation center for the millions of servicemen being discharged. On April 7, 1947, George G. Lundberg was named base commander.[1]

With the Air Force moving into the jet age in the late 1940s, Norton began overhauling jet engines in 1951, and the San Bernardino Air Materiel Area became one of three Air Force jet overhaul centers by 1953. To accommodate the largest Strategic Air Command bombers, the main runway was extended to 10,000 ft by 1954. B-45 Tornado upgrades were performed at Norton in the late 1940s.

On 29 November 1957, Gen. Thomas D. White disclosed the development of an anti-missile called the Wizard, the assignment of intercontinental and intermediate-range ballistic missile programs to Strategic Air Command, and a transfer of the 1st Missile Division to SAC. Also, the San Bernardino Air Force Depot, California, would assume support for long-range ballistic missile programs.[2]

In the 1960s, Norton expanded its depot support mission by supporting Titan and Atlas Intercontinental Ballistic Missiles (ICBM)s, with depot-level logistical support. Also SAMSO, the Space and Missile Systems Organization, which managed the Minuteman and Peacekeeper programs, was located at Norton from the 1960s. Upon base closure, the mission was transferred to Los Angeles Air Force Station, later, Los Angeles Air Force Base. 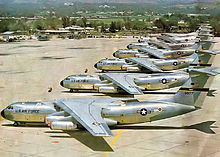 Brand new 63d MAW C-141As on the ramp at Norton AFB, 1967. Serial 66-0177 is in foreground. This aircraft will become the famous "Hanoi Taxi" which flew Bob Hope to USO shows in South Vietnam and in 1973, during the final days of the Vietnam War, repatriated American POWs from North Vietnam. Arizona Senator John McCain was one of the POWs who flew home on the Hanoi Taxi. 66-0177 was the last C-141 to be withdrawn from Air Force service after a career of almost 40 years, as the last of the fleet was retired in 2006. 66-0177 today is on permanent display at the National Museum of the United States Air Force

A change of mission in 1966 from Air Force Logistics Command to Military Airlift Command (MAC) meant that Norton became one of six Military Airlift Command strategic-airlift bases, supporting US Army and Marine Corps' airlift requirements among other functions. Also, a new MAC passenger terminal was built to replace the World War II era (1944) facility to better handle passenger traffic, primarily to and from Southeast Asia. The new airline-style building was activated in 1968. The base newspaper in this era was named "The Globetrotter".

Discrete C-130 Hercules modification tests were conducted out of Area II of the base in the late 1960s, with the 1198th Operational Evaluation and Training Squadron operating four highly-classified C-130E(I) special operations testbeds modified at Lockheed Air Services, at near-by Ontario Airport under projects Thin Slice/Heavy Chain.[3][4] Their electronics suites were developed for and identical to those of the MC-130 Combat Talon, with the addition of Forward looking infrared, and 1198th OE&TS test missions were flown out of Takhli Royal Thai Air Force Base, Thailand, under project "Heavy Chain", with the aircraft painted all-black.

A base railroad system interchanged with the Pacific Electric/Southern Pacific branch line on the south side of the installation. When base rail operations were discontinued in the late 1970s, the base diesel locomotive, a General Electric centercab B/B 90/90, USAF 8580, was donated to the Orange Empire Railway Museum at Perris, California.

In 1950, Air Defense Command activated the 27th Air Division (Defense) at Norton AFB, being assigned to the Western Air Defense Force. Its mission was the air defense of southern California and later southern Nevada. By 1953, its area of control included a small portion of Arizona. The 27th AD controlled both aircraft interceptor squadrons, as well as general surveillance antiaircraft radar squadrons.

LAADS was inactivated on 1 April 1966 and the designation was returned as the 27th Air Division, being stationed at Luke AFB, Arizona under Fourth Air Force as part of a consolidation with the inactivating Phoenix Air Defense Sector. DC-17 at Norton was inactivated a few months later on 25 June 1966, its mission being consolidated with SAGE Data Center DC-21 at Luke AFB under the 27th AD.

The SAGE Direction Center closed in 1966 along with the other ADC facilities at Norton. It became the home of the Air Force Audiovisual Service, home of the Air Force Now films, as well as the Air Force historical films. The windowless, temperature controlled SAGE structure was perfect for film storage. It also was the home of the Air Combat Camera Service. After Norton closed in April 1994, the facility was essentially abandoned, and remains so to this day. Many smaller structures have been torn down in its vicinity, and likely it remains standing is due to its thick, heavily-reinforced concrete and steel construction, designed to absorb high explosive detonations.

Norton was placed on the Department of Defense's base closure list in 1989 (the same year that the DoD signed the Federal Facilities Agreement with the EPA).

The last of the facilities on the base were closed in 1995.

The aviation facilities of the base were converted into San Bernardino International Airport, and 3 of the 4 stationed squadrons (all 4 of which were part of the 63d and 445th Military Airlift Wings) - C-141 Starlifter, C-21, and C-12 Huron aircraft - were moved to nearby March Air Force Base, while the remaining squadron - C-141 aircraft - was moved to McChord Air Force Base, Washington. Control of the airport and surrounding facilities was turned over to a consortium consisting of several nearby cities to manage and oversee its operation. While the airport is reported to be making money, no company currently operates scheduled flights from the airport. A bid to gain traffic from DHL was lost to March Air Reserve Base and current market conditions do not lend themselves to any airlines wanting to start service to a new airport in the Greater Los Angeles Area. However, improvements in recent years to the runway and terminal facilities as well as infrastructure support such as widening of area roads have been made and the airport is still looking for a carrier willing to begin operations.[8] Charter as well as private flights do operate from SBIA and it is also used as a base for firefighting planes when needed.

Recently, private development on the former base has helped turn the basically unused land into jobs and revenue for the city of San Bernardino as several companies have opened distribution centers on the property. Mattel opened a distribution center in 2004, consolidating three other smaller ones from around Southern California into a single location.[9] Stater Brothers Markets also built a new headquarters as well as a centralized warehousing facility. The completion of the project in 2007 consolidated the headquarters and a warehouse from nearby Colton as well as several other warehouses that had been located around the Inland Empire into a single location.[10] Industrial buildings used by Pep Boys Auto and Kohl's are also located on the premises.