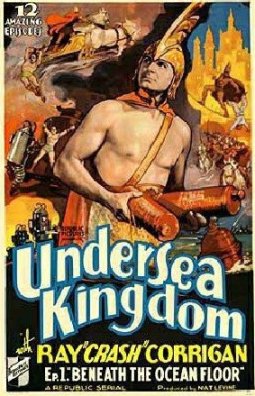 Following a suspicious earthquake, and detecting a series of signals, Professor Norton leads an expedition, including Lt Crash Corrigan and Reporter Diana Compton, in his Rocket Submarine to the suspected location of Atlantis. Finding the lost continent they become embroiled in an Atlantean civil war between Sharad (with his White Robes) and the usurper Unga Khan (with his Black Robes) who wishes to conquer Atlantis and then destroy the upper world with s generated by his Disintegrator. Thus he will rule the world unless he can be stopped in time.

The star of the serial is "", using that for the first time. The name was created to sound similar to "Flash Gordon", in one of many similarities. Formerly a stunt man — he was the person swinging on vines in "" — Corrigan went on to use this screenname for the rest of his career in serials and B-Westerns.

The first two chapters of the serial were mocked on the TV show "".

The plot revolves around the main character "Crash" Corrigan trying to stop an evil tyrant ruler of Atlantis from conquering the lost continent and then the entire upper world.

Lieutenant Crash Corrigan, in his last year at Annapolis, is invited by Billy Norton to visit his father, Professor Norton, after a wrestling match. At their house, the professor is demonstrating his new invention, which can detect and prevent (at short range) , to Diana Compton and his theory about regular tremours from the area where used to be.

When Atlantean tyrant, Unga Khan, and his Black Robe army turn their Disintegrator beam on , Professor Norton leads an to investigate. Along with him in his Rocket Submarine are Crash, Diana, three sailors (Briny Deep, Salty, Joe) and their pet Sinbad. Unknown to the expedition until it is underway and in trouble, Billy has stowed away on the Rocket Sub as well.

Problems for the expedition begin when Joe, in charge of the engine room, is driven mad by the fear that the submarine cannot survive such depths. In order to prove this, he locks the engine room door and sends the sub into a fatal dive. As soon as this crisis is averted, Unga Khan and Captain Hakur detect their approach and bring them through a tunnel into the Inland Sea with a Magnetic Ray.

Filming occurred between and , with the final release date recorded as (although this is more accurately the date that the sixth chapter was made available to s). Undersea Kingdom was re-released on to pad out the number of serials released by Republic in that year. A Century 66 feature version was released in 1966 under the title of "Sharad of Atlantis", this was a 100-minute film version created by editing together the individual chapters.

While the technology base of Atlantis is apparently very low, with wielding and s the main type of military force, Unga Khan's "Black Robes" (or Imperial Guard) have several very advanced items of technology.

Unga Khan's Disintegrator is the main plot device. A machine capable of artificially creating s at a precise target, it is this that leads to Professor Norton's expedition to Atlantis and also the means by which Unga Khan means to conquer or destroy the upper world.

The Reflector Plate is the most ubiquitous device used throughout the serial. This is a screen that acts much like a "view screen", or , in more modern science fiction. It is used to communicate between two plates or it is used, most frequently, to view (and hear) any remote location. No cameras or microphones are apparently necessary to this second function and it appears to have no limits - viewing the Sacred City, areas of Atlantis and the upper world with no problems.

Unga Khan's Imperial Guard are augmented by Volkites, a type of controlled by a bulky remote control device often worn by Hakur. They also perform tasks in the tower, for example operating the Master Controls of other devices such as the Disintegrator when commanded to by remote control (the remote control of most devices are usually done through remotely controlling the Volkite(s) to operate the Master Controls to remotely control the actual device). While the Imperial Guard use swords or bows, the Volkites are armed with Atomguns, rifle sized s. Occasionally these are used by others where necessary but only when taken from a Volkite.

In terms of vehicles, Unga Khan has one , called the Juggernaut. This can be controlled by remote as well as by the driver (either human or Volite). It has no armament itself but is used as a battering ram during siege warfare. Though not used very often Unga Khan's forces also have several aircraft called Vol Planes (also known as Sky Chariots by the White Robes).

Unga Khan's tower is armed with one Projector which fires one Aerial Torpedo at a time. This is, again, controlled by remote control.

Unga Khan uses his Transformation Chamber to make people "change their mind". It is a brain washing device that makes the victim Unga Khan's willing slave. The effect wears of in time and can be reversed by the Chamber.

The Magnetic Ray is used only once to pull the Rocket Submarine into Atlantis (much like a in or ) in the first chapter. In the last chapter, an Invisible Wall of Atom Rays is activated to provide Unga Khan's tower with a to protect it from the United States Navy's bombardment. Finally, the tower itself has automatic sliding doors and elevators.

The most advanced technology seemingly available to the opposing "White Robes" of Sharad are s and s built into the walls of the Sacred City.

# "Beneath The Ocean Floor:" Flying cause a as the heroes try to escape the Volkites (robots) in the .
# "The Undersea City:" Crash is hit by an atom gun and falls down an .
# "Arena of Death:" Crash is dragged behind a chariot.
# "Revenge of the Volkites:" During a siege, Crash and Moloch fall into the path of a Black Robe .
# "Prisoners of Atlantis:" Diana is trapped in the brainwashing Transformation Chamber.
# "The Juggernaut Strikes:" As Crash walks a tightrope across a , with Billy on his back, Ditmar snaps the cable with torpedoes.
# "The Submarine Tr

# "Into the Metal Tower:" Crash is tied to the front of the Juggernaut (The Black Robe )) as it rams the gates of the sacred city.
# "Death in the Air:" The heroes' aircraft is shot down by Unga Khan.
# "Atlantis Destroyed:" The heroes are caught in the Sacred City under .
# "Flaming Death:" Crash and Professor Norton are caught in the jets of Unga Khan's .

Many of the solutions to these are "cheats" - they change or obviously do not match the events shown in the preceding .

# "The Undersea City:" Crash and Billy take cover on the other side of the peak.
# "Arena of Death:" Crash does not fall but catches the side of the shaft and climbs down.
# "Revenge of the Volkites:" Crash climbs into the chariot and takes over.
# "Prisoners of Atlantis:" They lie flat and are unharmed as the charge passes around them.
# "The Juggernaut Strikes:" Crash rescues Diana before the process is completed.
# "The Submarine Tr

# "Into the Metal Tower:" Crash dives underwater moments before the explosion.
# "Death in the Air:" Despite the visible effects of crashing into the gate in the previous chapter, this time the gates are opened before impact and the Juggernaut simply enters the courtyard.
# "Atlantis Destroyed:" Crash, Billy and Professor Norton climb out of the wreckage without significant injury.
# "Flaming Death:" Although Sharad is killed when a column falls on him, none of the heroes are seriously injured.
# "Ascent to the Upper World:" Moloch is caught in the flames but Crash and Professor Norton escape to shelter in a lower level of the caves under Unga Khan's tower.

These include the Volkites (The robotic army of the Black Robes), The Juggernaut (their tank), Vol Planes (Atlantean rocketships) and Professor Norton's Rocket Submarine, as well as sets and Unga Khan's tower.

Some of the model effects seen within the serial:

*
* [http://www.archive.org/details/undersea_kingdom1 Download or view the serial at Archive.org]
* [http://www.serialsquadron.com/dvds/scifi/underseakingdom/index.html/ Undersea Kingdom at The Serial Squadron]