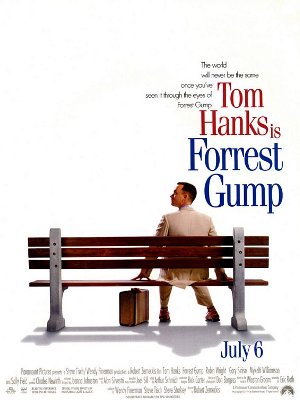 "Forrest Gump" is a 1994 based on the 1986 novel of the same name by and the name of the title character of both. The film was a huge commercial success, earning US$ 677 million worldwide during its theatrical run making it the top grossing film in North America released that year. The film garnered a total of 13 Academy Award nominations, of which it won six, including Best Picture, Best Visual Effects, Best Director (), and Best Actor ().

The film tells the story of a man with an of 75 and his epic journey through life, meeting historical figures, influencing popular culture and experiencing first-hand historic events of the 20th century while being largely unaware of their significance, due to his low intelligence. The film differs substantially from the book on which it was based.

The film begins with a feather falling to the feet of Forrest Gump who is sitting at a bus stop in . Forrest picks up the feather and puts it in the book "", then tells the story of his life to a woman seated next to him. The listeners at the bus stop change regularly throughout his narration, each showing a different attitude ranging from disbelief and indifference to rapt veneration.

On his first day of school, he meets a girl named Jenny, whose life is followed in parallel to Forrest's at times. One day after school, he is being threatened by a group of bullies because of his leg braces. Jenny tells him to run, and he does so, losing his leg braces in the process. Having discarded his s, his ability to run at lightning speed gets him into college on a football scholarship. He excels at football so much that he becomes an , and meets .

After his college graduation, he enlists in the army and is sent to Vietnam. In boot camp, Forrest makes fast friends with a man named Bubba (), who convinces Forrest to go into the shrimping business with him when the war is over. After finishing boot camp, Bubba and Forrest are assigned to the same platoon and upon arrival in Vietnam, Forrest meets his commanding officer, Lieutenant Dan Taylor (). Lieutenant Dan came from a military family, and had lost an ancestor in every American war. Later while on patrol, Forrest's platoon is attacked. Though Forrest rescues many of the men, including Lt Dan, whose legs were severely injured and are later amputated, Bubba is killed in action. Forrest is awarded the for his heroism, and meets at his award ceremony.

While Forrest is in recovery for a bullet shot to his , he discovers his uncanny ability for ping-pong, eventually gaining popularity and rising to celebrity status, later playing ping-pong in China. After meeting at an anti-war rally in Forrest reunites with Jenny, who has been living a counterculture lifestyle. He also encounters Lt. Dan, who has become a bitter alcoholic having felt that it was his destiny to die on the battlefield in Vietnam. Forrest celebrates New Years Eve with Dan, who is initially hostile and uses Forrest as a means of obtaining alcohol. When Forrest tells of his and Bubba's plan to buy a shrimping boat, Dan mocks Forrest and sarcastically promises that he will become first mate of the ship. However, Dan later finds empathy with the fact that Forrest has been discriminated against in the past because of his perceived low IQ, likening it to his own experience of disability.

Forrest endorses a company that makes ping-pong paddles, earning himself $25,000, which he uses to buy a shrimping boat, fulfilling his promise to Bubba. Lieutenant Dan returns to fulfill his earlier promise and becomes first mate of the ship. Forrest and Lt. Dan fail to pull in much shrimp at first. During , both men stay out in the middle of the ocean with the boat-- by fate, theirs is the only shrimping boat surviving. The lack of competition helps Lt. Dan and Forrest's catch to become huge amounts of shrimp. Lt. Dan invests the money in "some kind of fruit company" and Forrest is financially secure for the rest of his life. Forrest names his company , which inspired an actual shrimp restaurant. Returning home, Forrest finds out that his mother has cancer and later dies.

One day, Jenny returns to visit Forrest and he proposes marriage to her. She declines, though feels obliged to prove her love to him by sleeping with him. She leaves early the next morning. On a whim, Forrest elects to go for a run. Seemingly capriciously, he decides to keep running across the country several times, over some three and a half years, becoming famous. During his run, Forrest unwittingly inspires two separate entrepreneurs to create Smiley Face/"Have a Nice Day" t-shirts and "" bumper stickers.

In present-day, Forrest reveals that he is waiting at the bus stop because he received a letter from Jenny who, having seen him run on television, asks him to visit her. Once he is reunited with Jenny, Forrest discovers she has a young son, of whom Forrest is the father. Jenny tells Forrest she is suffering from a virus (probably , though this is never definitively stated). [cite book |last=Maltby |first=Richard |authorlink= |title=Hollywood Cinema |publisher= |date=2003 |pages=441 |isbn=0631216154] [cite book |last=Sobchack |first=Vivian Carol |authorlink= |title=Meta-Morphing: Visual Transformation and the Culture of Quick-change |publisher= |date=2000 |pages=199 |isbn=0816633193] [cite book |last=Chapman |first=James |authorlink= |title=Cinemas of the World: Film and Society from 1895 to the Present |publisher= |date=2003 |pages=151 |isbn=1861891628] Together the three move back to Greenbow, . Jenny and Forrest finally marry, with Lieutenant Dan arriving for the wedding while walking on two legs with the use of s, along with his Vietnamese wife. However, Jenny dies soon afterward.

The film ends with father and son waiting for the school bus on little Forrest's first day of school. Opening the book his son is taking to school, the white feather from the beginning of the movie is seen to fall from within the pages. As the bus pulls away, the white feather is caught on a breeze and drifts skyward.

Though superficially Gump might not seem to understand all that goes on around him, the viewer gets the sense that he knows enough, the rest being superfluous detail. offers the example of Jenny telling Forrest, "You don't know what love is."

Over Jenny's grave, Forrest ponders whether life is governed by a predetermined fate, as his Vietnam commanding officer emphatically believes, or whether it's a series of meaningless accidents, as his mother offers on her deathbed, concluding "maybe it's both, maybe both happening at the same time." The feather at either end of the movie may represent this train of thought-- it floats randomly in the breeze, but will eventually, inevitably come floating back down.

It has been noted that while Forrest follows a very conservative lifestyle, Jenny's life is full of countercultural embrace, complete with drug usage and antiwar rallies, and that their eventual marriage might be a kind of tongue-in-cheek reconciliation.

Other commentators believe that the film forecast the 1994 and used the image of Forrest Gump to promote traditional, conservative values adhered by Gump's character. [ Gordinier, Jeff. [http://www.ew.com/ew/article/0,,296004,00.html Mr. Gump Goes to Washington] . Feb 10, 1995. ]

Ken Ralston and his team at were responsible for the film's visual effects. Using CGI-techniques it was possible to depict Gump meeting now-deceased presidents and shaking their hands.

Archival footage was used and with the help of techniques like , warping, morphing and rotoscoping, Tom Hanks was integrated into it. This feat was honored with an Oscar for Best Visual Effects.

The CGI removal of actor 's legs, after his character had them amputated, was achieved by wrapping his legs with a blue fabric, which later facilitated the work of the "roto-paint"-team to paint out his legs from every single frame. At one point, while hoisting himself into his , his "missing" legs are used for support.

played himself in the 1970s with make-up applied to make it appear that he was much younger than the commentator was during the filming. Consequently, Cavett is the only well-known figure in the film to actually play himself for the feature, rather than via archive footage.

"Forrest Gump" is based on the 1986 novel by . Both center around the character of Forrest Gump. However, the film primarily focuses on the first eleven chapters of the novel, before skipping ahead to the end of the novel with the founding of Bubba Gump Shrimp and the meeting with Forrest Jr. In addition to skipping some parts of the novel, the film adds several aspects to Forrest's life that do not occur in the novel, such as his needing leg braces as a child and his run across the country.

Forrest's core character and personality are also changed from the novel, among other things he is a savant - while playing football at the university, he fails craft and gym, but receives a perfect score in an advanced physics class he was enrolled in by his coach to satisfy his college requirements.

While the film illustrates "the powerful role that social memory plays in constructing concepts of nation" by placing "in relief the power of memory and narratives of memory to create subjective connections to the past," it also "creates a kind of prosthetic memory of the period [the 1960s] so that it can be integrated into the traditional narrative of nation" and "thus imagines America as a kind of virtual nation whose historical debts have been forgiven and whose disabilities have all been corrected." [Robert Burgoyne (1997). "Film Nation: Hollywood Looks at U.S. History". Minneapolis: University of Minnesota Press, pp. 14 - 15]

The soundtrack from "Forrest Gump" had a variety of music from the 50s, 60s, 70s, and early 80s performed by American artists. It went on to sell 12 million copies, and is one of the top selling albums in the United States. [ [http://www.riaa.com/gp/bestsellers/topalbums.asp Top Albums at the Recording Industry Association of America] ]

A screenplay based on the original novel's sequel, "", was written by in 2001. For unknown reasons, the sequel was never put into production. In March 2007, however, it was reported that Paramount producers are now taking another look at the screenplay. [ [http://www.cinemablend.com/new/Forrest-Gump-Gets-A-Sequel-4626.html Forrest Gump Gets a Sequel] ]

*
*
*
* [http://www.filminglocationsdetectives.com/films/forrest_gump.htm The filming Locations from the movie]