Imiaslavie (Russian: Имяславие) or Imiabozhie (Имябожие), also spelled imyaslavie and imyabozhie, and also referred to as onomatodoxy, is a dogmatic movement which was condemned by the Russian Orthodox Church, but that is still promoted by some affiliated with Gregory Lourie of the "Russian Orthodox Autonomous Church" (a splinter group of the Russian Orthodox Church), and by some other contemporary Russian writers (many of whom are associated with St. Sergius Orthodox Theological Institute in Paris), which asserts that the Name of God is God Himself. The movement emerged in the beginning of the 20th century but both proponents and opponents claim it to be connected with much religious thought throughout the history of Christianity (proponents claim its connections to the Church Fathers, while opponents claim the connections to the ancient heresiarchs).

The 20th century history of Imiaslavie started in 1907 with the publication of the book On the Caucasus Mountains by a revered starets, Schema-monk Illarion. In his book, Illarion told of his spiritual experience with the Jesus Prayer as a proof that 'The name of God is God Himself and can produce miracles'. The book became extremely popular among the Russian monks on Mount Athos in Greece. Many of them argued that, since according to Plato, "the name of an object exists since before the object itself does," so the name of God must pre-exist before the world was created, and that it (the Name) cannot be anything but God Himself. Among other things, this was thought to mean that knowledge of the secret name of God alone allows one to perform miracles (a similar concept exists in Kabbalah). This also implied that extreme caution was needed when using names like Jehovah, Christ, etc.

The opponents of Imiaslavie, the other Athonite monks, considered this teaching to be pantheism and incompatible with Christianity. They argued that, before the Creation God did not need this name, so the name was created and is actually an empty sound having no mystical attributes in and of itself. The proponents of this idea got the name Imyaslavtsy (those who glorify the Name) and its opponents were called Imyabortsy (those who fight the Name).

The main proponent of the Imiaslavie doctrine was a Hieromonk of the Andreyevsky skete of Athos Mountain, Anthony Bulatovich, who published a few books on the subject. Those who promote this doctrine claim support from the writings of Saint John of Kronstadt, and the influential mystic and healer Grigori Rasputin, the popularly-styled "mad monk" who was closely associated with the Russian Royal Family shortly before the October Revolution. It should be pointed out, however, that St John of Kronstadt reposed before this controversy erupted, and his quotes, it can be argued, are taken out of context to support a whole set of ideas that are not found in his own writings.[1]

The most vocal opponent was the archbishop of Volyn, Antony (Khrapovitsky) of Kiev "Antony Khrapovitsky". http://orthodoxwiki.org/Anthony_%28Khrapovitsky%29_of_Kiev. , who considered imiaslavie to be a variation of the heresy propounded by the Khlysts (khlystovschina). In 1912, by decision of the Holy Synod, the book On the Caucasus Mountains became forbidden in Russia. It was not reprinted until 1998. In September 1912 the book was judged by Patriarch Joachim III of Constantinople, who gave a negative opinion about it (though in 1907 he had supported the same book).

In January 1913 a monk by the name of David, who was a supporter of imiaslavie, was elected as the hegumen of the Andreyevsky skete, taking the place of the monk Hieronim who was an opponent of it. Hieronim did not recognize the results of the elections and complained to the Russian Embassy in Greece. The Imperial Government insisted on changing the hegumen back to Hieronim. In April the teaching of imiaslavie was also proclaimed to be pantheism by the new Patriarch Germanus V of Constantinople. 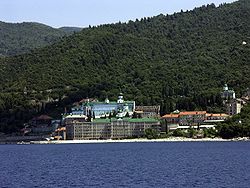 In June 1913 a small Russian fleet, consisting of the gunboat Donets and the transport ships Tsar and Kherson, delivered the archbishop of Vologda, Nikon (Rozhdestvensky), and a number of troops to Mount Athos. The poll organized by the archbishop had shown that among 1700 of St. Panteleimon Monastery's monks, 661 monks identified themselves as imiabortsy, 517 as imiaslavtsy, 360 refused to participate in the poll, and the rest identified themselves as neutral. In May and June archbishop Nikon held talks with the imiaslavtsy and tried to convince them to change their beliefs voluntarily, but was unsuccessful. On July 31 the troops stormed the monastery. Although the monks were not armed and did not actively resist, the troops showed very heavy-handed tactics. They set up two machine guns and a number of water cannons, and the soldiers were ordered to beat the monks with their bayonets and rifle butts. Allegedly, four monks were killed and at least forty-eight were wounded. After the storming of St. Panteleimon Monastery the monks from the Andreevsky Skete surrendered voluntarily.

The military transport Kherson was converted into a prison ship. It took 628 monks to Russia and on July 9 set sail to Odessa. Forty monks were left in the Mt. Athos hospital, judged unable to survive the transportation. On July 14 the steamship Chikhachev delivered another 212 monks from Mt. Athos. The rest of the monks signed papers that they rejected the imiaslavie.

After interrogation in Odessa, 8 imprisoned monks were returned to Athos, 40 put into jail, and the rest were defrocked and exiled to different areas of the Russian Empire according to their propiska. One of the leaders of the imiaslavtsy, Antony Bulatovich, was sent to his family estate in the village Lebedinka of Kharkov gubernia, to where many imiaslavtsy moved. 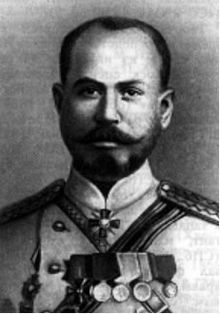 In February 1914 some imiaslavtsy were received by the Emperor Nicholas II. The kind reception was considered a sign of changing fate. In May 1914, Makariy, the Metropolitan of Moscow, and the Moscow Synodal Office decided to accept the imiaslavtsy into church services without their having to repent, as there was nothing to repent about. A similar decision was taken by the Kiev Metropolitan. On May 10 the decision was partially adopted by the Holy Synod that the imiaslavtsy were allowed to keep their positions in the Orthodox Church without a formal repentance, but it specified that the teaching itself was still to be considered a heresy.

On 27 August 1914 the leader of the movement Anthony Bulatovich asked to be sent as an Army chaplain to World War I, his request was granted by the Holy Synod. On July 1, 1915 the Holy Synod received a letter from the original author, schema-monk Illarion, asking whether he was expelled from the Church (Illarion lived as a hermit in the Caucasus Mountains and seems to have been unaware of all the commotion his book caused). Illarion died on June 2, 1916, without having received an answer. In September 1917 the Pomestny Sobor of the Russian Orthodox Church was assembled to solve the problem with Imiaslavie, with both strong proponents and opponents of Imiaslavie present. The work of the Sobor was aborted due to the October Revolution. Among the theologians who spoke out for Imiaslavie were Pavel Florensky and Sergey Bulgakov.

In October 1918 the Holy Synod of the Russian Orthodox Church cancelled the previous decision, and no longer allowed imiaslavtsy to participate in church services unless they repented. The decision was signed by Patriarch Tikhon of Moscow. In January 1919 the leader of the imiaslavtsy, Antony Bulatovich, broke relations with the Holy Synod and Tikhon and returned to his family estate in Lebedinka. There, he was killed either by robbers or by soldiers of the Red Army in December.

The question of compatibility between Orthodoxy and imiaslavie is still hotly argued by some theologians. Bishop Hilarion (Alfeyev), in 1999, wrote: "Even though the movement of the 'Name-worshippers' was crushed at the beginning of the century on the orders of the Holy Synod, discussion of the matter regained impetus in the years preceding the Moscow Council (1917–18), which was supposed to come to a decision about this but did not succeed in doing so. Thus the Church's final assessment of Name-worshipping remains an open question to this day." [2]

One parallel lies with the Pure Land schools of Buddhism in China and Japan. They both revere the Nembutsu, the formulaic name of Amida Buddha (Namu Amida Butsu), as the sole method in this latter age of "degenerate Dharma" (末法, mappō) for birth in the Pure Land after earthly death. Shinran, the founder of the Japanese Pure Land sect of Jodo Shinshu, went so far as to declare the Name as the same as Amida and his characteristics (Infinite Light and Infinite Life).

American author J.D. Salinger mentions this parallel in his fictional work Franny and Zooey. Such a similarity between different religions is part of the subject-matter of comparative religion.

The Russian Mathematics School is considered by some to have been created by Dmitri Egorov and Nikolai Luzin, both of whom were Imiaslavtsy and personal friends of Pavel Florensky as well as philosopher Aleksei Losev (both imiaslavtsy in theology). "Bulletin, spring 2005: Graham". AmAcad. http://www.amacad.org/publications/bulletin/spring2005/graham.pdf. "Unknown title". Examen database. http://www.examen.ru/db/Examine/catdoc_id/83E7BCE52BD8AEA5C3256A5E00639D14/rootid/9327995FB7A6D40FC3256A02002CE0D5/defacto.html.  Florensky was a pupil of Egorov and a classmate of Luzin, and they published together. Florensky published works on the parallels between abstract mathematics and religion: he stated that the mathematics of continuous functions is like rationalism while some concepts, such as transfinite numbers, can be explained only in the framework of the Imiaslavie philosophy, where the Name of God is God Himself.