Talking in Your Sleep (song)

Talking in Your Sleep (song) 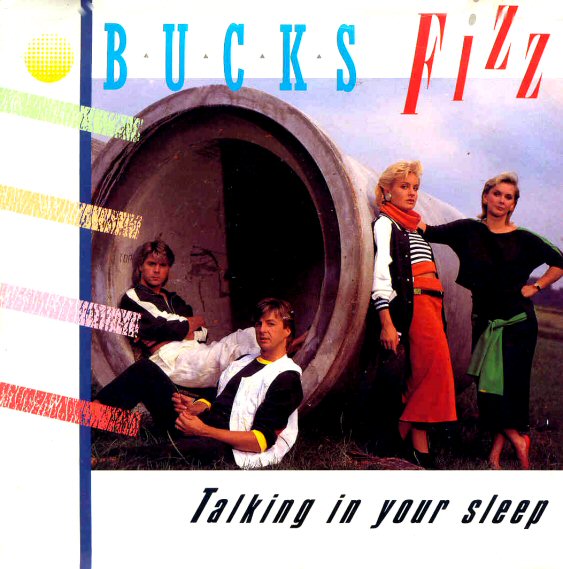 Artist = Bucks Fizz
from Album =
Released = August, 1984
Format = ,
B-side = "Don't Think You're Fooling Me"
[Recorded =]
Genre = Pop
Length = 4.10
Label =
Writer = Canler, Skill, Palmer, Solley, Marinos
Producer = Andy Hill
Certification =
Chart position = "Talking in Your Sleep" is a by . The song appeared on the Romantics' 1983 album "In Heat" and was the Romantics' biggest chart hit, garnering substantial radio airplay and sales. The song hit the number three position on the "Billboard" chart in February of 1984. It also went to #1 on the chart in the U.S., where it remained on top for two weeks. The song's , widely aired at the time on and elsewhere, featured the band performing while surrounded by standing, but seemingly sleeping women who were dressed in lingerie, pajamas, and other sleepwear.The single was unsuccessful in the , but a year later, the song became famous when pop group Bucks Fizz covered it and reached No.15 on the . [ [http://www.chartstats.com/songinfo.php?id=11849 Chart Stats - Bucks Fizz - Talking In Your Sleep ] ] Their version was produced by Andy Hill and featured on their fourth album, "." [ [http://www.raffem.com/BucksFizz85till2003.htm#1984 Rafaels and Stefans pictures ] ] [ [http://www.bucksfizzearlyyears.co.uk/talkingsleep.htm bucksfizzearlyyears.co.uk - video shots] ]

This song is one of the '80s tunes that can be heard in the compilation 50th Anniversary Arcade Collection, for the , , GameCube and PC.

The popular Canadian teen drama , which is known for naming each episode after an 80s hit song, named an episode after this song.