:"This article is about the fish; for the fictional television character, see ."Taxobox
name = Toadfishes 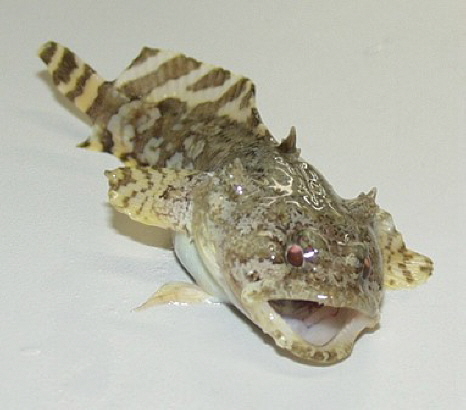 regnum = ia
phylum = Chordata
classis =
ordo = Batrachoidiformes
familia = Batrachoididae
subdivision_ranks = Genera
subdivision = Subfamily Batrachoidinae
""
""
""
""
""
""
""
""
""
""
""
""
""
""
""
Subfamily Porichthyinae
""
""
Subfamily Thalassophryninae
""
""The toadfish comprise the family Batrachoididae, the only family in the order Batrachoidiformes. Both the English common name and scientific name refer to their -like appearance ("batrakhos" is Greek for frog). There are 69 in 19 genera, most of which are marine in distribution though some are found in water and one , the , is found exclusively in freshwater habitats in . Toadfish are s that favor sandy or muddy substrates where their cryptic coloration helps them avoid detection by their . The dorsal fin and gill cover spines on the toadfishes of the subfamily Thalassophryninae are hollow and will inject venom into any predator attempting to eat the fish. Its dorsal fins and opercular spines are so poisonous, that eating them may result in serious illness or death.

Toadfish are well known for their ability to "sing", males in particular using the as a sound-production device used to attract mates. The species "Opsanus tau" known as the is quite widely used as a research animal, while a few species, most notably "Thalassophryne amazonica", are occasionally kept as aquarium fish.

Toadfishes are usually scaleless, with eyes set high on large heads. Their mouths are also large, with both and . The gills are small and occur only on the sides of the fish. The s are forward of the s, usually under the s, and have one spine with several soft rays. There are two separate dorsal fins, the first smaller dorsal fin with spines; and the second larger and longer dorsal, with from 15 to 25 soft rays. The number of vertebra range from 25 to 47.

Toadfishes of the genus "Porichthys", the es, have s and four s, while the Thalassophryninae are venomous, with a total of four hollow spines (two dorsal and one on each gill-flap (opercle)) connecting to venom glands and capable of delivering a painful wound.

Toadfish are found worldwide. Almost all are marine, but "Daector quadrizonatus" and "Thalassophryne amazonica" are known from () and the , respectively.

Toadfishes are bottom-dwellers, ranging from near shore areas to deep waters. They tend to be omnivorous, eating s, s, mollusks and other fish. They often hide in rock crevices, among the bottom vegetation, or even dig dens in the bottom sediments, from which they ambush their prey.

Males make the nests and guard them after the female lays the eggs. The male attracts the female by "singing", that is by releasing air by contracting muscles on their swim bladder. The sound has been called a 'hum' or 'whistle'.

Toadfish are not normally commercially exploited, however, they are taken by local fishermen as a food fish, and by trawlers where they usually end up as a source of fishmeal and oil. Some smaller toadfish from brackish-water habitats have been exported as fresh-water aquarium fishes.