Slightly larger than its counterpart in the south, the Merced River, the Tuolumne River's upper watershed was shaped by glaciations in the previous Ice Age, which produced Hetch Hetchy Valley and the Grand Canyon of the Tuolumne. The river has been a source of controversy for many years, especially from Hetch Hetchy Valley. Much of its water is now diverted to San Francisco from Hetch Hetchy Reservoir, which fills the valley in the Sierra Nevada once compared to famous Yosemite Valley. More water is diverted from La Grange Diversion Dam to irrigate farmland in the Central Valley, which leaves the lower course of the river with less than 60% of its historic flow. Despite these extensive water system developments, the Tuolumne is still a popular area in Yosemite National Park, although far less visited than the Merced River. 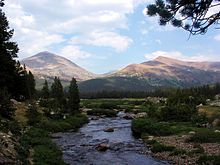 The Dana Fork of the Tuolumne River

The Tuolumne headwaters are along ~35 mi (56 km) of the Sierra Crest from the triple watershed point with the Stanislaus River southward over Mount Dana and the triple point for the Dana & Lyell Forks (37°49′05″N 119°13′02″W﻿ / ﻿37.818056°N 119.217238°W﻿ / 37.818056; -119.217238) to the Upper San Joaquin triple point near Mount Lyell. The Tuolumne source is the confluence of the Dana Fork (from Mount Dana) and the Lyell Fork (from Mount Lyell) in the Tuolumne Meadows. After the subsequent confluence with Cold Canyon & Conness Creek, the Tuolumne flows through Glen Aulin (Gaelic: beautiful valley) where the valley walls pull away from each other and become steeper and the meandering riverbed is quite level and forms deep pools. Just northwest of Glen Aulin, the River presents spectacular waterfalls, including LeConte Falls and Waterwheel Falls, both known for the "waterwheel" phenomenon whereby descending water hits rocks below and wheels back upward. 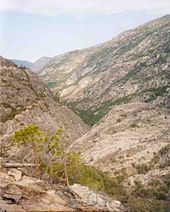 The Grand Canyon of the Tuolumne, looking west. Muir Gorge cuts diagonally across the middleground.

At this point, the Tuolumne enters the Grand Canyon of the Tuolumne. This canyon is a deep, roughly 'V'-shaped gorge. The walls are not as steep and bare as those of Yosemite Valley. The flora of the valley bottom is a haphazard melange of chaparral, manzanita scrub and oak woodland characteristic of the foothills and lowlands with a coniferous forest reminiscent of (but different from) that found above the canyon rim. This vegetation clings and clambers up every ledge of the valley walls to the top, giving it a lusher appearance than Yosemite Valley, though this area in fact experiences a drier climate. Class IV whitewater is in an 18-mile section from Meral's Pool to Ward's Ferry Bridge.[4] 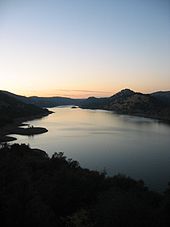 Below the Grand Canyon lies Hetch Hetchy Valley. The river bottom flattens again, and the canyon walls pull away and become steeper, in a fashion similar to that of Yosemite Valley; this valley was once perhaps the most spectacular part of the Tuolumne's course. However, at the bottom of Hetch Hetchy Valley stands O'Shaughnessy Dam, which floods the entire valley under the Hetch Hetchy Reservoir. Before the river leaves the dam, Falls Creek, Tiltill Creek and Rancheria Creek enter from the right. Below the dam, the river flows through the Stanislaus National Forest, within which it is joined by Cherry Creek, the South Fork of the Tuolumne River, and the Middle Fork of the Tuolumne River. Far below the town of Groveland, the river is designated Wild and Scenic. This portion is popular for rafting and kayaking and is joined by the Clavey River. Still farther downstream lie Don Pedro Dam and Don Pedro Reservoir. These reservoirs provide electricity and divert water to serve farms in the Modesto Irrigation District and Turlock Irrigation District, and cities in the San Francisco Bay Area.

The Tuolumne River in West Modesto.

Towns along the Tuolumne River:

Cities along the Tuolumne River:

The Modesto Airport lies next to the Tuolumne River. Between the airport and the river lies Veterans' Park.

The Native Americans along the Tuolumne were the Paiutes and Miwoks. The Miwoks lived along the western part of the Tuolumne from Big Oak Flat down to the valley floor, while the Paiutes camped primarily east of that point towards the high Sierra Nevada. The Washoe Indians also visited the area. The Tuolumne River Trust was founded in 1981.[5]