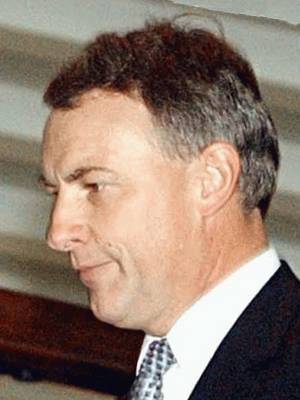 Philip Bruce Goff (born , ), generally known as Phil Goff, is the current Minister of Defence of . He also serves as Minister of Corrections, Minister of Trade, Minister for Disarmament and Arms Control and Associate Minister of Finance.

Goff was born and raised in Auckland. His family was relatively poor, and his father wanted Goff to enter the workforce immediately after finishing high school. Goff, however, wished to attend university, a decision that caused him to leave home when only sixteen years old. By working as a freezing worker and a cleaner, Goff was able to fund himself through university, gaining an MA (with first class honours) in political studies at the . In 1973, he was Senior Scholar in Political Studies, and also won the Butterworth Prize for law. While completing his MA, he lectured in Political Studies. He also briefly worked as an Insurance Workers Union organiser.

Goff had joined the Labour Party in 1969, the same year he left home, and held a number of administrative positions within the party. In the 1981 elections, Goff stood for Parliament in the Roskill electorate, and was elected.

In the 1990 elections, Labour was defeated, and Goff lost his own parliamentary seat to . While many commentators blamed Douglas's controversial reforms for Labour's loss, Goff said that the main problem had been in communication, not policy. Goff was appointed to a position at the , and later accepted a scholarship to study for six months at , but eventually decided to stand for parliament once again.

In the 1993 elections, Goff was re-elected as MP for Roskill. , Labour's new leader, made him the party's spokesperson for Justice. In 1996, Goff was part of the group which asked Clark to step down as leader. Clark survived the challenge, and was advised by her allies to demote Goff, but chose not to do so.

Goff retained his seat in the 1996 elections, having elected not to be placed on Labour's party list.

Goff is one of the better known members of the Labour Party, and is often cited as a possible successor to Helen Clark (eg by in February 2008). The other possible successor, is retiring as an MP in 2008. While Clark and Goff differ substantially in their economic policies they are able to work relatively well together. Goff is a strong advocate of putting ethical issues before national interests.

Goff is also a member of the Board of Advisors of the -Australasia.

Phil Goff is married to Mary Ellen Goff, and has three children. He lives in the Auckland suburb of Clevedon.