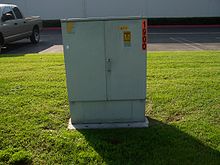 In telecommunication, the term outside plant has the following meanings:

The CATV industry divides its fixed assets between head end or inside plant, and outside plant. The electrical power industry also uses the term outside plant to refer to electric power distribution systems. 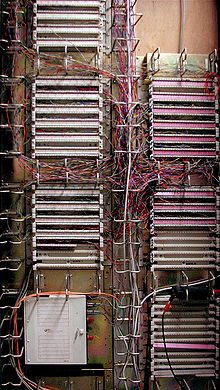 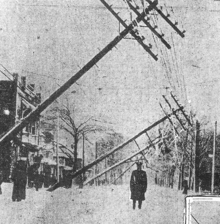 Network connections between devices such as computers, printers, and phones require a physical infrastructure to carry and process signals. Typically, this infrastructure will consist of:

Outside plant cabling, whether copper or fiber, is generally installed as aerial cable between poles, in an underground conduit system, or by direct burial.[2] Hardware associated with the outside plant must be either protected from the elements (for example, distribution frames are generally protected by a street side cabinet) or constructed with materials suitable for exposure to the elements. Installation of the outside plant elements often require construction of significant physical infrastructure, such as underground vaults.[3] In older large installations, cabling is sometimes protected by air pressure systems designed to prevent water infiltration. While this is not a modern approach, the cost of replacement of the older cabling with sealed cabling is often prohibitively expensive.[4] The cabling used in the outside plant must also be protected from electrical disturbances caused by lightning or voltage surges due to electrical shorts or induction.[5]

Active equipment (such as a POTS or DSL line circuit) can then be connected to the line in order to provide service, but this is not considered part of outside plant.

Protecting Equipment in the Outside Plant

The environment can play a large role in the quality and lifespan of equipment used in the outside plant. It is critical that environmental testing criteria as well as design and performance requirements be defined for this type of equipment.

There are generally four operating environments or classes covering all outside plant (OSP) applications, including wireless facilities.

Electronic equipment located in one or more of these environmental class locations are designed to withstand various environmental operating conditions resulting from climatic conditions that may include rain, snow, sleet, high winds, ice, salt spray, and sand storms. Since outside temperatures can possibly range from -40°C (-40°F) to 46°C (115°F), with varying degrees of solar loading, along with humidity levels ranging from below 10% up to 100%, significant environmental stresses within the enclosure or facility can be produced.

Telcordia GR-3108, Generic Requirements for Network Equipment in the Outside Plant (OSP) contains the most recent industry data regarding each Class described above. It also discusses what is currently happening in ATIS and Underwriters Laboratories (UL)