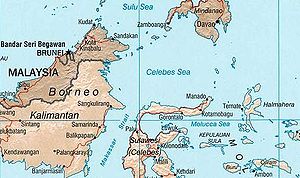 The Celebes Sea (Indonesian: Laut Sulawesi) of the western Pacific Ocean is bordered on the north by the Sulu Archipelago and Sulu Sea and Mindanao Island of the Philippines, on the east by the Sangihe Islands chain, on the south by Sulawesi, and on the west by Kalimantan in Indonesia. It extends 420 miles (675 km) north-south by 520 miles (837 km) east-west and has a total surface area of 110,000 square miles (280,000 km2), to a maximum depth of 20,300 feet (6,200 m). The sea opens southwest through the Makassar Strait into the Java Sea.

The Celebes Sea is a piece of an ancient ocean basin that formed 42 million years ago in a locale removed from any landmass. By 20,000,000 years ago, earth crust movement had moved the basin close enough to the Indonesian and Philippine volcanoes to receive emitted debris.[1] By 10 million years ago the Celebes Sea was inundated with continental debris, including coal, which was shed from a growing young mountain on Borneo and the basin had docked against Eurasia.

The border between the Celebes and the Sulu Sea is at the Sibutu-Basilan Ridge. Strong ocean currents, deep sea trenches and seamounts, combined with active volcanic islands, result in complex oceanographic features.

The International Hydrographic Organization (IHO) defines the Celebes Sea as being one of the waters of the East Indian Archipelago. The IHO defines its limits as follows:[2]

On the West. The East coast of Borneo between Tanjong Mangkalihat and Tanjong Labian, the Southern limit of the Sulu Sea.

The Celebes Sea has somewhat attained an international notoriety for its pirates who prey not only on small time fishermen but also giant container ships. Nowadays, these pirates have high-tech weapons and equipment like radar and GPS navigation devices and ride on high-speed motorboats. It is the second most pirated body of water after the Gulf of Aden near Somalia.

The Celebes Sea is home to a wide variety of fish and aquatic creatures. The tropical setting and warm clear waters permit it to harbor about 580 of the world's 793 species of reef-building corals, which grow as some of the most bio-diverse coral reefs in the world, and an impressive array of marine life, including whales and dolphins, sea turtles, manta rays, eagle rays, barracuda, marlin and other reef and pelagic species. Tuna and yellowfin tuna are also abundant.

In addition to high abundance of fish caught in the Celebes sea, this sea also yields other aquatic products like sea tang.

An important sea route for regional trade. The sea is also popular for scuba diving and luxury ocean cruising.