Naval Surface Warfare Center Crane Division is the principal tenant command located at Naval Support Activity Crane. NSA Crane is a United States Navy installation located approximately 25 miles (40 km) southwest of Bloomington, Indiana and predominantly located in Martin County, but small parts also extend into Greene and Lawrence counties. It was originally established in 1941 under the Bureau of Ordnance as the Naval Ammunition Depot for production, testing, and storage of ordnance under the first supplemental Defense Appropriation Act. The base is named after William M. Crane. The base is the third largest naval installation in the world by geographic area and employs approximately 3300 people. The closest community is the small town of Crane, which lies adjacent to the northwest corner of the facility.

With an increasing demand in the 1990s and 2000s by the U.S. military for bases to support multiple functions rather than being sole-purpose installations, Crane has taken on a broad variety of development and support operations. These include expeditionary warfare systems, fleet maintenance and modernization, radar, power systems, strategic systems, small arms, surface and airborne electronic warfare, night vision systems, and undersea warfare systems. Crane is also involved in systems development for the upcoming DD(X) class of destroyer for the U.S. Navy and the Littoral Combat Ship.

Operations at NSWC Crane are divided into 3 distinct focus areas.

The Strategic Missions Focus Area encompasses the full range of DoD activities that alter an adversary’s will and ability to attack the United States and its interests.

Development: Crane develops and manufactures all of the infrared countermeasures used on US Navy aircraft

Sustainment: Crane is the only DOD Engineering, Logistics and Maintenance Capability for Air, Ground, Surface and Submarine EW Systems within one Facility

Training: Crane is helping the Army stand up their Capabilities for Counter IED

Special Munitions and Weapons: Crane is USSOCOM’s PM for the development, acquisition, fielding and sustainment of the SOF Combat Assault Rifle (SCAR)

Sensors and Communications: SOPMOD has surged more than $60M in ground combat end items to Special Operations in the field during OIF/OEF

In the late 1940s an ammunition quality evaluation unit was added by the Bureau to expand its quality control system. As the complexity and sophistication of weapons increased in the 1950s and 1960s, Crane’s activities, capabilities and expertise expanded in scope under the newly formed Bureau of Weapons to include small arms, sonobuoy surveillance, microwave tubes, POLARIS missiles and other scientific and engineering support to the Bureau. 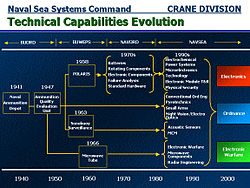 Chart showing evolution of technical capabilities over time at Crane

In 1974, Crane came under the Naval Sea Systems Command that was established from the merger of the Naval Ordnance Systems Command and Naval Ship Systems Command. Shortly after in 1975, Crane’s name was changed to the Naval Weapons Support Center that more accurately reflected the true function of the installation.

In 1977, a major change occurred with the designation of the United States Army as the single-service manager of conventional ammunition. This resulted in the establishment of the tenant command, Crane Army Ammunition Activity (CAAA) that took over the loading, assembly and storage of ammunition at the installation. CAAA and Crane’s strong partnership continues today.

In 1992, Crane’s name was changed to the Crane Division, Naval Surface Warfare Center when the warfare centers were established under the related systems commands. Today grown from its ordnance roots, Crane is recognized world wide as a modern and sophisticated leader in diverse and highly technical product lines.

In 2005, the Base Realignment and Closure Commission recommended to retain most existing operations at Crane, with weapons and armaments research, development and acquisition, and test and evaluation, except gun/ammunition, combat system security, and energetic materials to Naval Air Weapons Station China Lake[1]. This resulted in a net loss of 672 civilian jobs from the base[2].

Naval Support Activity Crane hosts a number of different commands and divisions. These are:

The base is the third largest naval installation in the world, comprising approximately 108 square miles (259 square kilometeres) of territory. Lake Greenwood, an 800-acre (3.2 km2) lake, is entirely encompassed by the base. Reconstructive White Oak wood for the USS Constitution is harvested from this base from a grove of trees known as "Constitution Grove"[3].

Most of Crane sits in Martin County. When the rural county voted to switch over to the Central Time Zone, it isolated Crane from the rest of the state, creating a "time island". After a year, the county petitioned the Department of Transportation and a move back to Eastern Time was approved.