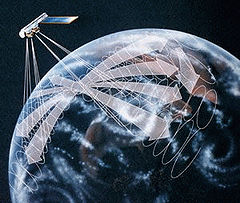 Clouds and the Earth's Radiant Energy System (CERES) is on-going[update] NASA climatological experiment from Earth orbit.[1] The CERES are scientific satellite instruments, part of the NASA's Earth Observing System (EOS), designed to measure both solar-reflected and Earth-emitted radiation from the top of the atmosphere (TOA) to the Earth's surface. Cloud properties are determined using simultaneous measurements by other EOS instruments such as the Moderate Resolution Imaging Spectroradiometer (MODIS).[2] Results from the CERES and other NASA missions, such as the Earth Radiation Budget Experiment (ERBE),[3] will lead to a better understanding of the role of clouds and the energy cycle in global climate change.[4]

The first CERES instrument (PFM) was launched aboard the NASA Tropical Rainfall Measuring Mission (TRMM) in November 1997 from Japan. An additional four CERES instruments were launched on the EOS Terra satellite in December 1999 (FM1 and FM2) and on EOS Aqua satellite in May 2002 (FM3 and FM4). Currently operational are all CERES instruments on Terra and Aqua satellites. Each CERES instrument is a radiometer which has three channels - a shortwave channel to measure reflected sunlight in 0.3 - 5 µm region, a channel to measure Earth-emitted thermal radiation in the 8-12 µm "window" region, and a total channel to measure entire spectrum of outgoing Earth's radiation. CERES spatial resolution at nadir view (equivalent diameter of the footprint) is 10 km for CERES on TRMM, and 20 km for CERES on Terra and Aqua satellites. Onboard calibration sources include a solar diffuser, a tungsten lamp system with a stability[disambiguation needed

] monitor, and a pair of blackbody cavities that can be controlled at different temperatures. Cold space observations and internal calibration are performed during normal Earth scans. During its operation CERES has shown remarkable stability. There has been no discernible change in instrument gain for any channel at the 0.2% level with 95% confidence. Ground and in-space calibrations agree to within 0.25%.

CERES operates in three scanning modes: across the satellite ground track (cross-track), along the direction of the satellite ground track (along-track), and in a Rotating Azimuth Plane (RAP). In RAP mode, the radiometers scan in elevation as they rotate in azimuth, thus acquiring radiance measurement from a wide range of viewing angles. Until February 2005, on Terra and Aqua satellites one of CERES instruments scanned in cross-track mode while the other was in RAP or along-track mode. The instrument operating in RAP scanning mode took two days of along-track data every month. The multi-angular CERES data allowed to derive new models which account for anisotropy of the viewed scene, and allow TOA radiative flux retrieval with enhanced precision.[5]