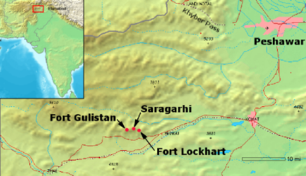 The map of the battle site

The Battle of Saragarhi was fought during the Tirah Campaign on 12 September 1897 between twenty-one Sikhs of the 4th Battalion (then 36th Sikhs) of the Sikh Regiment of British India, defending an army post, and 10,000 Afghan and Orakzai tribesmen. The battle occurred in the Khyber-Pakhtunkhwa, now part of Pakistan, which then formed part of British India.

The contingent of the twenty-one Sikhs from the 36th Sikhs was led by Havildar Ishar Singh. They all chose to fight to the death. Sikh military personnel and Sikh civilians commemorate the battle every year on 12 September, as Saragarhi Day.

Saragarhi is a small village in the border district of Kohat, situated on the Samana Range, in present day Pakistan. On the 20th April 1894, the 36th Sikh Regiment of the British Army was created, under the command of Colonel J. Cook.[5] In August 1897, five companies of the 36th Sikhs under Lt. Col. John Haughton, were sent to the Khyber-Pakhtunkhwa, stationed at Samana Hills, Kurag, Sangar, Sahtop Dhar and Saragarhi.

The British had partially succeeded in getting control of this volatile area, however tribal Pashtuns attacked British personnel from time to time. Thus a series of forts, originally constructed by Maharaja Ranjit Singh, Ruler of the Sikh Empire, were consolidated. Two of the forts were Fort Lockhart, (on the Samana Range of the Hindu Kush mountains), and Fort Gulistan (Sulaiman Range), situated a few miles apart. Due to the forts not being visible to each other, Saragarhi was created midway, as a heliographic communication post. The Saragarhi post, situated on a rocky ridge, consisted of a small block house with loop-holed ramparts and a signalling tower.

A general uprising by the Afghans began there in 1897, and between 27 August - 11 September, many vigorous efforts by Pashtuns to capture the forts were thwarted by 36th Sikh regiment. In 1897, insurgent and inimical activities had increased, and on 3rd and 9 September Afridi tribes, with allegiance to Afghans, attacked Fort Gulistan. Both the attacks were repulsed, and a relief column from Fort Lockhart, on its return trip, reinforced the signalling detachment positioned at Saragarhi, increasing its strength to one Non-Commissioned Officer (NCO) and twenty troops of Other Ranks (ORs).

On September 12, 1897, 10,000 Pashtuns attacked the signalling post at Saragarhi, so that communication would be lost between the two forts. 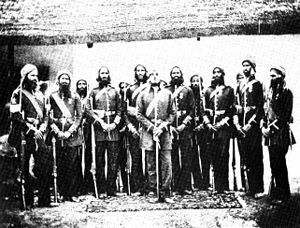 Details of the Battle of Saragarhi are considered fairly accurate, due to Gurmukh Singh signalling events to Fort Lockhart as they occurred.[5]

Having destroyed Saragarhi, the Afghans turned their attention to Fort Gulistan, but they had been delayed too long, and reinforcements arrived there in the night of 13–14 September, before the fort could be conquered.[1] The Pashtuns later admitted that they had lost about 180 killed[6] and many more wounded[4] during the engagement against the 21 Sikh soldiers, but some 600 bodies[7] are said to have been seen around the ruined post when the relief party arrived (however, the fort had been retaken, on 14 September, by the use of intensive artillery fire,[8] which may have caused many casualties). The total casualties in the entire campaign, including the Battle of Saragarhi, numbered at around 4,800.

When the gallantry of Saragarhi was recounted to the Parliament of the United Kingdom, the recitation drew a standing ovation from the members. The saga of Saragarhi was also brought to the notice of Queen Victoria. 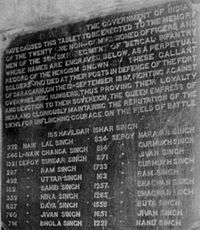 All the 21 Sikh non-commissioned officers and soldiers of other ranks who laid down their lives in the Battle of Saragarhi were posthumously awarded the Indian Order of Merit, the highest gallantry award of that time, which an Indian soldier could receive by the hands of the British crown, the corresponding gallantry award being Victoria Cross. This award is equivalent to today's Param Vir Chakra awarded by the President of India.

The names of the 21 recipients of the gallantry award are:

In 1915, Chuhar Singh wrote the epic poem "Khalsa Bahadur" in memory of the Sikhs who died at Sargarhi.[11]

According to the Indian Express,[12] Saragarhi is "one of the eight collective stories on bravery published by UNESCO for children" (bibliographical details not given) which also, according to other sources, include the heroic Battle of Thermopylae.[13][14][15] The battle has become iconic of eastern military civilization, British empire military history and Sikh history.[16] The modern Sikh Regiment continues to celebrate the day of the Battle of Saragarhi each 12 September as the Regimental Battle Honours Day. To commemorate the men the British built two Saragarhi Gurudwaras: one in Amritsar very close to the main entrance of the Golden Temple, and another in Ferozepur Cantonment, which was the district that most of the men hailed from.

The Indian military, in particular the Indian Army have been pushing for the battle to be taught in India's schools. They want it taught due to the heroism shown by the Indian soldiers to acts as inspiration for young children – in the field of bravery. There were articles like these, printed in the Punjab's longest-established newspaper, The Tribune in 1999: "the military action at Saragarhi is taught to students the world over and particularly to students in France."[17] Although there seems to be no evidence for this claim (it is not, for example, on France's national school curriculum[18]) the news was enough to provoke political debate, and the battle has been taught in schools in the Punjab since 2000:

Saragarhi Memorial Gurudwara (temple) was built in memory of the 21 Sikh soldiers that fought at The Battle of Saragarhi.[20]

The battle has frequently been compared to the Battle of Thermopylae,[16] where a small Greek force faced a large Persian army of Xerxes (480 BC).

The comparison is made because of the overwhelming odds faced by a tiny defending force in each case, and the defenders' brave stand to their deaths, as well as the extremely disproportionate number of fatalities caused to the attacking force.

It is important to note that during the Battle of Saragarhi, the British did not manage to get a relief unit there until after the 21 had fought to their deaths. At Thermopylae, the 300 Spartans and their allies also stayed after their lines had been outflanked, to fight to their deaths.