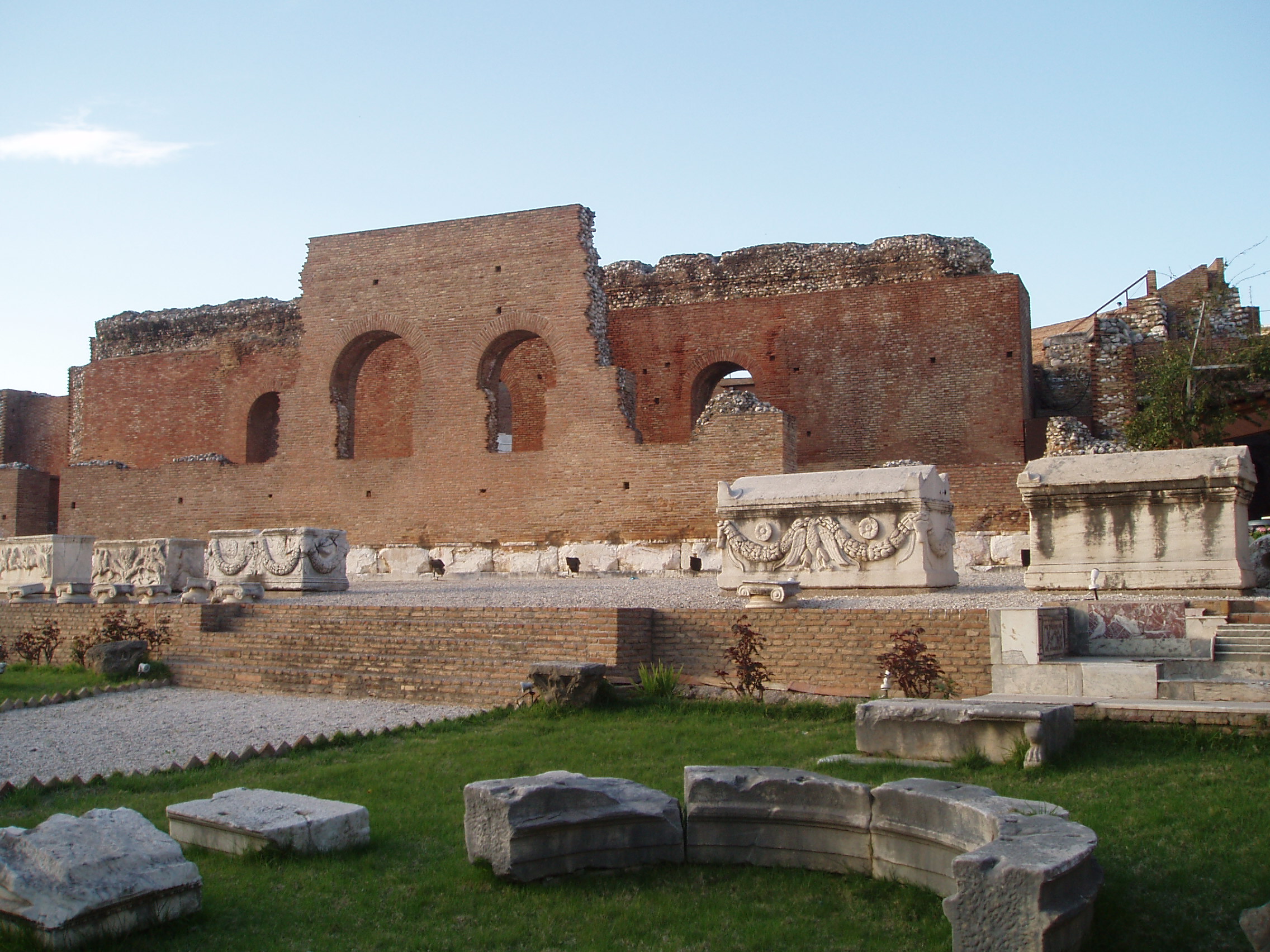 Patras (: Πάτρα, "Pátra", IPA2|ˈpatra, : Πάτραι, "Pátrai", _la. Patrae) is 's third largest urban centre and the capital of the prefecture of , located in northern , 215 kilometers west of Athens. The city is built at the foothills of Mount , overlooking the .

The Patras metropolitan area is a conurbation of nearly 200,000 inhabitants.

A central feature of the of Patras is its division in upper and lower sections, connected with stairs. This is the result of an interplay between natural geography and human settlement patterns; the lower section of the city, which includes the 19th century urban core and the port, is adjacent to the sea and stretches between the estuaries of the rivers of Glafkos and Haradros. It is built on what was originally a bed of river soils and dried-up swamps. The older upper section covers the area of the pre-modern settlement, around the Fortress, on what is the last elevation of Mount Panachaikon (convert|1926|m|ft|0|abbr=on)

The largest river in the area is flowing to the south of Patras. Glafkos springs in Mount and its water is, since 1925, collected in a small mountainous reservoir-dam near the village of Souli and subsequently pumped in order to provide energy for the country's first . [Thomopoulos, St. N, "History of the City of Patras from Antiquity to 1821", Patrai 1952, (ed. Triantafyllou, K.N.)] The water is also used for the orchards of Eglykas and as drinking water for the city. Other rivers are "Haradros", "Meilichos" and the mountain torrent "Diakoniaris".

Of great importance for the biological diversity of the area and the preservation of its climate is the swamp of , a small and coastal of only 30 hectares, located to the north of the city centre. The main features of this wetland are its apparent survival difficulty, being at the heart of a densely populated urban centre that features a relatively arid climate and its admittedly high level of biodiversity, with over 90 species of birds being observed until the early 1990s, according to a study by the Patras Bureau of the "Hellenic Ornithological Society". [ [http://www.ornithologiki.gr/en/enmain.htm Hellenic Ornithological Society - Birds, birding and conservation in Greece ] ]

Another geophysical characteristic of the region is its high level of . Small tremors are recorded along the coast of Patras almost constantly. Larger earthquakes hit the area every few years with potentially destructive effects. In 1993, a 5.0 magnitude earthquake caused some damage to several (mostly older) buildings throughout Patras due to the proximity of the epicenter to the city. In June 15, 1995, a 6.2 magnitude earthquake hit the nearby town of , causing some structural damage to a few buildings of Patras as well. The Ionian Islands are also frequently hit by even more severe earthquakes, some of which can be felt in the city. In antiquity, the most notable example of destruction caused by an earthquake in the region was the total submergence of the ancient Achaean city of , now .

The first traces of settlement in Patras date as early as in the 3rd millennium BC, in the area of modern Aroe. Patras flourished for the first time during the Post-Helladic or Mycenean period (1580&ndash;1100 BC). Ancient Patras was formed by the unification of three Mycenaean villages located in modern Aroe; namely Antheia and . Mythology has it that after the Dorian invasion, a group of from led by the established a colony. During antiquity, Patras remained a farming city. It would be in Roman times that it was to become an important port.

After 280 BC and prior to the Roman occupation of Greece, Patras played a significant role in the foundation of the second "" (Achaiki Sympoliteia), along with the cities of Dyme, Triteia and Pharai. Later on, and following the Roman occupation of Greece in 146 BC, Patras played a key role, and founded a Roman colony in its area. Moreover, Patras became a Christian centre since the early days of Christianity, and it is the city where St. Andrew was crucified.

During Byzantine times Patras continued to be an important port as well as an industrial centre. One of the most scholarly philosophers and theologians of the time, was born at Patrae, at around 860. By the 9th century there are strong signs the city was prosperous: the widow from Patras had accumulated immense wealth in land ownership, the carpet and textile industry, and offered critical support in the ascent of to the Byzantine throne.

In 1204 Patras was conquered by the , and became the seat of the Latin within the . Captured in 1205 by and , the city became capital and its archbishop primate of the principality of Achaea, while in 1387 , grand master of the order of the Knights Hospitaller at , endeavoured to make himself master of Achaea and took Patras by storm. In 1408, Patras became Venetian, and by the close of the 15th century the city was governed by the archbishop in the name of the . It was nevertheless seized once more by the despot Constantine in 1430, who was immediately contested by the .

In 1458 Patras was conquered by the Sultan of the , . Under the Ottomans, it was known as Baliabadra, from the Greek Παλαιά Πάτρα, the town, as opposed to Νέα Πάτρα, the fortress. Though Mehmet granted the city special privileges and tax reductions, it never became a major centre of commerce. and attacked and captured it several times during the 15th and 16th centuries, but never re-established their rule effectively. [ "s.v." Baliabadra] . It was here that the began [Strategus Makrygiannis, "Memoirs", Book A, Chapter I, Athens, 1849, http://www.snhell.gr/testimonies/writer.asp?id=102] ; but the Turks, confined to the citadel, held out until 1828.

Patras was liberated on 7 October, 1828 by the French expeditionary force in the Peloponnese, under the command of General Maison. Patras developed quickly into the second largest urban centre in late 19th century Greece. [Triantafyllou, Κ.Ν., "Historic Lexicon of Patras"] The city benefited from its role as the main export port for the agricultural produce of the Peloponnese. [Kounenaki Pegy, "19th Century Patras: how the character of the city changed with the development of the port after 1828" "Kathimerini" 14-10-01 http://news.kathimerini.gr/4dcgi/_w_articles_civ_491371_14/10/2001_3252]

In the early 20th century, Patras developed fast and became the first Greek city to introduce public streetlights and electrified tramways. [Thomopoulos] The war effort necessitated by the hampered the city's development and also created uncontrollable with the influx of refugees from . During the Second World War, the city was a major target of Italian air raids; during the period of Axis occupation, a German military command was established and German and Italian troops stationed in the city.

The city is divided into the upper and the lower sections, connected with roads and broad stairs. The upper section is the older and the more picturesque; however, the lower sections are attractively laid out, featuring a variety of squares in a unique geometric pattern. The most notable of these are the "Psila Alonia" and the "Georgiou I" . A number of exquisite neoclassical buildings are to be found, including the "" "Apollon" Theatre" in Georgiou I Square, the "Town Hall", the headquarters of the "Local Trade Association" and the " Court of Justice".

The most significant ancient monument, open to the public, is the "Roman Odeon", now reconstructed and in use as an open-air theatre used for performances and concerts during the summer months. Overlooking the whole town is the ruined "Castle", whose current outline dates back to the Venetian invasion of the town (1687-1715). Today, its interior is used as a public garden.

Near the seafront, between the sites of the new and the old port, stands the monumental church of Saint Andrew, the patron Saint of the city and the largest church of Greece.

The city is endowed with a number of neoclassical buildings and mansions dating from the late 19th and early 20th centuries. In the past, years of neglect and the absence of protection enforcement, as well as recent earthquakes had contributed to the destruction of several such examples. Today, however, most surviving neoclassical buildings are under a strict protection status. The project for the restoration of the city's architectural heritage is part of the 2006 Cultural Capital bid. Several (Λαϊκή) laikê (produce markets) take place across the city's neighborhoods on weekdays, and on Saturdays.

The Achaia region is home to 4 museums, including the Patras Archaeological Museum and the Museum for the Sacrifice of the people of Kalavrita.

In the west end, a cliff that is about 15 m tall lies to the west. It offers panorama includes the mountains and the mountains of the Etoloakarnania, it also offers a view prefecture as well as the and the mountains to the southeast including and the south. The buildings blocks the panorama except for the western portion.

Patras is the first city of the modern Greek state to develop a city plan. In January 1829, , a Greek engineer of the French army, presented the plan of the new city of Patras to the Governor , who approved it. Voulgaris applied the orthogonal rule in the urban complex of Patras. The plan was divided into two sectors, the upper and the lower city, with a different city block layout; a revision of the proposal in 1858 was that finally realised.

The city is the seat of a Greek Orthodox ric, while there is a living community of Roman Catholics and a historical church.

The city boasts a relatively large number of politicians in the national political arena as its natives. Most particularly in the first century after liberation, when the city lay second only to Athens in the urban hierarchy of the country, significant personalities shaping the character of Greece were associated with Patras. Its famous natives include the prime ministers the main leader of the anti-venizelist party in the 1910s, a high-ranking officer, politician and one of the leaders of the “1922 Revolution”, , a prominent liberal party cadre, foreign minister and prime minister, and a distinguished economist, minister and finally prime minister during the civil war era. More recent figures include leader of the and one of the most important political personalities in post World War II Greece, , the last democratically elected head of government before the establishment of the 1967 junta, and , the former president of the Hellenic Republic.

* is located about 40km from the city.