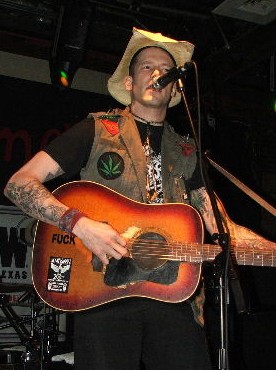 Shelton Hank Williams III (, ) is an American musician. He is sometimes credited as Hank III or even III. The three is often represented by a modified version of 's Black Flag logo.

The grandson of and the son of , both legends, the younger Williams' music alternates between somewhat traditional country, and a more aggressive music that touches on and elements of various heavy metal styles. His music is difficult to classify concisely, but has been described as hard-twang, , , , and honky punk. [ [http://www.marysville.k12.mi.us/mms/Finished_Projects/Internet/zcataldo/hankIII.html hankIII ] ]

Hank III enjoys an extremely loyal grassroots fan base and much of his success can be attributed to his taper-friendly stance of his frenetic live tours, which have been his main promotional vehicle.

Williams spent much of his early career playing s in bands.

In 1996, mounting payments led Williams to capitalize on his family name and sign a contract with music industry giant . "" was issued shortly thereafter, which spliced together recordings to make it seem that three generations of Williams men were singing alongside one another. Upon first meeting Hank III, , a friend of Hank Williams Sr., reportedly said "Lord, honey, you're a ghost," as she was astonished by his striking resemblance to his grandfather.Fact|date=September 2008

Williams' first solo album, "", was released in September to respectable sales and strong reviews. While his name (and his uncanny vocal and physical resemblances to his grandfather) could have guaranteed Williams a thriving country audience, he had little patience for the often predictable Nashville sound, nor for even the minimal constraints on behavior his promoters required. His opinions on this subject are well summed up in the songs "" and "" "" was released in .

Known for his relentless touring, Williams' live shows typically follow a "" format of a set followed by a set, and then an set. He plays country and hellbilly with his "Damn Band" and produces a very different sound with Assjack, which is a band. The lineup for Assjack includes the addition of supplemental vocalist, Gary Lindsey, bassist JoeBuck switching from upright to electric bass, and the departure of his fiddle and slide guitar players. In the past, The Damn Band/Assjack also featured fiddle-player extraordinaire Michael "Fiddleboy" McCanless, who would play both sets, adding traditional violin for country set of the concert before plugging his instrument into an amplifier and distortion unit for later sets. Another former band member was guitarist , previously with , who left The Damn Band and Assjack in January 2001 and later that year formed .

Williams had a great deal of trouble with . He expressed dissatisfaction with his debut, and reportedly the label was unwilling to release his appropriately named "" LP, nor allow him to issue it on another record label. In response, Williams began selling t-shirts stating "Fuck Curb." Also during this era, Williams played in , a now defunct band led by with former vocalist . , former drummer for , has toured with Hank III as well as contributing to his album "".

In late 2004, "Thrown Out of the Bar" was slated for release, but Curb opted not to issue it. Williams and label executive would be in and out of court for the next year before a judge ruled in favor of Williams in the spring of 2005, demanding that Curb release the album. Shortly thereafter, Williams and Curb came to terms, and Williams dropped his "Fuck Curb" campaign. "Bar" was reworked into "Straight to Hell", released on Curb’s rock imprint, Bruc, which featured a cover of "Pills I Took," originally by .

Battles with had delayed the release of "Straight to Hell", which was released on February 28, 2006 as a two-disc set in two formats: a censored version (for Wal-Mart), and an uncensored version, which was the first major-label Country album to bear a warning. One of the songs, "Pills I Took", was written by a little-known Wisconsin group called Those Poor Bastards who originally released the song on their 2004 CD "Country Bullshit" [Popmatters music review] .

Currently, Hank III will be touring in support of "Damn Right Rebel Proud", and has been overheard claiming that a rock record, presumably under the moniker of Assjack, will finally see the light of day in less than a year, followed by a new country album. He has also played drums for , formed with Anselmo and Mike Williams from . [ [http://www.metalunderground.com/news/details.cfm?newsid=18998 Metal News - Superjoint Ritual Is No More ( Metal Underground . com ) ] ]

* Hank III has recorded the tracks "87 Southbound" and "Thunderstorms and Neon Signs", which were penned by , a musician who is often compared to him.