Crotalaria is a genus of herbaceous plants and woody shrubs in the Family Fabaceae (Subfamily Faboideae) commonly known as rattlepods. Some 600 or more species of Crotalaria are described worldwide, mostly from the tropics; at least 500 species are known from Africa. Some species of Crotalaria are grown as ornamentals. The common name rattlepod or rattlebox is derived from the fact that the seeds become loose in the pod as they mature, and rattle when the pod is shaken. The name derives from the Greek κροταλον, meaning "castanet", and is the same root as the name for the rattlesnakes (Crotalus). 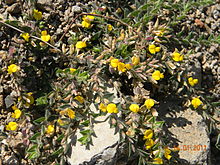 Crotalaria species are used as food plants by the larvae of some Lepidoptera species including Endoclita sericeus, Etiella zinckenella and Utetheisa ornatrix. The toxic alkaloids produced by some members of this genus are known to be incorporated by Utetheisia larvae and used to secure their defense from predators.[1]

Alkaloid monocrotaline, a pyrrolizidine alkaloid, the main toxic principle of Crotalaria spectabilis, is used to induce experimental pulmonary hypertension in laboratory animals.[2] [3] Larvae of the Ornate moth feed on the plant and re-purpose the poisonous compound as a defense, excreting it when they are threated by potential predation.