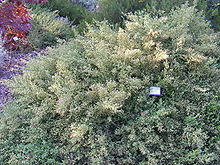 Baccharis pilularis flowering in a garden. 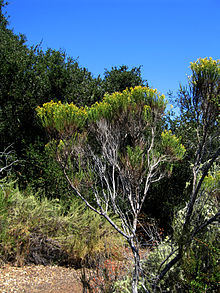 Baccharis pilularis, called Coyote Brush (or Bush), Chaparral Broom, and Bush Baccharis, is a shrub in the Asteraceae that grows in California, Oregon, and Baja California.

This shrub is generally smaller than 3 meters in height. It is glabrous and generally sticky. The stems are prostrate to erect which branches spreading or ascending. The leaves are 8–55 mm long and are entire to toothed and oblanceolate to obovate, with three principal veins. The heads are in a leafy panicle. The involucres are hemispheric to bell shaped. This species is dioecious (pistillate and staminate flowers occur on separate plants). Both staminate and pistillate heads are 3.5–5 mm long. Phyllaries are in 4–6 series, ovate, and glabrous. The receptacles are convex to conic and honeycombed. The staminate flowers range from 20–30 and there are 19–43 pistillate flowers. They are found in a variety of habitats, from coastal bluffs to oak woodlands. Erect plants are generally mixed (and intergrade completely) with prostrate plants.

Coyote bush is used frequently in cultivation, with the cultivar ground cover selections having various qualities of height, leaf color, and texture. It requires good drainage and moderate summer watering. Coyote brush is also drought tolerant, very useful for hedges or fence lines and for ground cover. It is rather deer-proof. It requires watering once a week until established and then about once per month during the first summer. It can mature in one to two years.

The Jepson Manual calls the erect plants just Baccharis pilularis, the same name as the ground cover form. They are considered the same species, because the short and tall plants intergrade completely. Yet only male plants are utilized in landscaping for Baccharis pilularis. If these are substituted for B. pilularis consanguinea in ecological restoration, there will not be as much seed set and recruitment of new individuals. Baccharis species are nectar sources for most of the predatory wasps, native small butterflies and native flies.