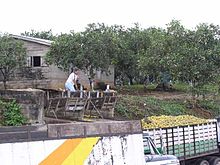 Citrus fruits are the highest value fruit crop in terms of international trade. There are two main markets for citrus fruit:

Most citrus production is accounted for by oranges, but significant quantities of grapefruits, pomeloes, lemons and limes are also grown.

While the origin of citrus fruits cannot be precisely identified, researchers believe they began to appear in southeast Asia at least 4000BC. From there, they slowly spread to northern Africa, mainly through migration and trade. During the period of the Roman Empire demand by higher-ranking members of society, along with increased trade, allowed the fruits to spread to southern Europe. Citrus fruits spread throughout Europe during the Middle Ages, and were then brought to the Americas by Spanish explorers. Worldwide trade in citrus fruits didn't appear until the 19th century and trade in orange juice developed as late as 1940.[1]

Total production and consumption of citrus fruit has grown strongly since the 1980s. Current annual worldwide citrus production is estimated at over 105 million tons, with more than half of this being oranges. According to the United Nations Conference on Trade and Development (UNCTAD), the rise in citrus production is mainly due to the increase in cultivation areas, improvements in transportation and packaging, rising incomes and consumer preference for healthy foods.

This trend is projected to change from 2000 to 2010 since the high production levels have slowed the rate of new plantings.[1]

Citrus fruits are produced all over the world. According to UNCTAD, in 2004 there were 140 citrus producing countries. Around 70% of the world's total citrus production is grown in the Northern Hemisphere, in particular countries around the Mediterranean and the United States, although Brazil is also one of the largest citrus producers.

In the United States, citrus fruits for consumption as fresh fruit are mainly grown in California, Arizona and Texas, while most orange juice and grapefruit is produced in Florida.[2]

China could be a major player in the orange juice and processed citrus markets, except for high tariffs on citrus that make domestic sale more profitable. Though citrus originated in southeast Asia, current citrus production is low due to lower than average yields, high production and marketing costs and problems with disease.[3]

Citrus production in most of Europe continues to decline, although the clementines produced by Spain are increasing in popularity among consumers.[4]

About a third of citrus fruit production goes for processing: more than 80% of this is for orange juice production. Demand for fresh and processed oranges continues to rise in excess of production, especially in developed countries.

The two main players are Florida in the United States and São Paulo in Brazil. Production of orange juice between these two makes up roughly 85 percent of the world market. Brazil exports 99 percent of its production, while 90 percent of Florida’s production is consumed in the US.[2]

Orange juice is traded internationally in the form of frozen concentrated orange juice to reduce the volume used, so that storage and transportation costs are lower.[4]

Citrus production is often cut short in many areas by outbreaks of bacteria known as Xanthomonas axonopodis, or Citrus canker, which cause unsightly lesions on all parts of the plant, affecting tree vitality and early drop of fruit. While not harmful to human consumption, the fruit becomes too unsightly to be sold, and entire orchards are often destroyed to protect the outbreak from spreading.[6]

Citrus canker affects all varieties of citrus trees, and recent outbreaks in Australia, Brazil and the United States have slowed citrus production in parts of those countries.