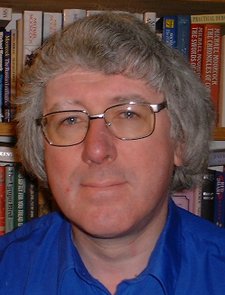 David Langford was born and grew up in Newport, Monmouthshire before studying for a degree in Physics at Brasenose College, Oxford, where he first became involved in science fiction fandom. Langford is married to Hazel and is the brother of the prolific artist and musician Jon.

His first job was as a weapons physicist at the Atomic Weapons Research Establishment at Aldermaston, Berkshire. In 1985 he set up a "tiny and informally run software company" with science fiction writer Christopher Priest, called Ansible Information after Langford's news-sheet. Langford is now the sole active partner.

Increasing hearing difficulties have reduced Langford's participation in some fan activities. His own jocular attitude towards the matter has led to such nicknames as "that deaf twit Langford"; and an anthology of his work was titled Let's Hear It for the Deaf Man.

As a writer of fiction, Langford is noted for his parodies. A collection of short stories, parodying various science fiction, fantasy fiction and detective story writers has been published as He Do the Time Police in Different Voices (2003, incorporating the earlier and much shorter 1988 parody collection The Dragonhiker's Guide to Battlefield Covenant at Dune's Edge: Odyssey Two). Two novels, parodying disaster novels and horror, respectively, are Earthdoom! and Guts!, both co-written with John Grant. 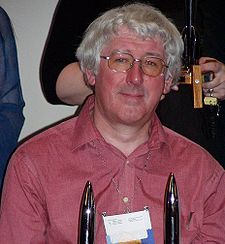 David Langford at Worldcon 2005 in Glasgow, with two Hugo Awards

The novelette An Account Of A Meeting With Denizens Of Another World 1871, is an entertaining account of a UFO encounter, as experienced by a Victorian, but is notable chiefly for the framing story, in which Langford claimed to have found the manuscript in an old desk (the story's narrator, William Robert Loosley, is a genuine ancestor of Langford's wife). This has led some UFOlogists to believe the story is genuine (including the US author Whitley Strieber, who referred to the 1871 incident in his novel Majestic). Langford freely admits the story is fictional when asked — but, as he notes, "Journalists usually don't ask."

Langford also had one serious science fiction novel published in 1982, The Space Eater (ISBN 0099288206). The 1984 novel The Leaky Establishment satirises the author's experiences at Aldermaston. His 2004 collection Different Kinds of Darkness is a compilation of 36 of his shorter, non-parodic science fiction pieces, the title story of which won the Hugo Award for Best Short Story in 2001.

A number of Langford's stories are set in a future containing images, colloquially called "basilisks", which crash the human mind by triggering thoughts that the mind is physically or logically incapable of thinking. The first of these stories was "BLIT" (Interzone, 1988); others include "What Happened at Cambridge IV" (Digital Dreams, 1990); "comp.basilisk FAQ" (Nature, 1999), and the Hugo-winning "Different Kinds of Darkness" (F&SF, 2000).

The idea has appeared elsewhere; in one of his novels, Ken MacLeod has characters explicitly mention (and worry about encountering) the "Langford Visual Hack". Similar references, also mentioning Langford by name, feature in works by Greg Egan and Charles Stross. The eponymous Snow Crash of Neal Stephenson's novel is a combination mental/computer virus capable of infecting the minds of hackers via their visual cortex. The idea also appears in Blindsight by Peter Watts where a particular combination of right angles is a harmful image to vampires. The roleplaying game Eclipse Phase has so-called "Basilisk hacks", sensory or linguistic attacks on cognitive processes.

A similar mandala concept also appears in the book Tetrarch by Alex Comfort, causing effects such as encouraging self-healing or preventing the ability to target an object in combat.

Langford has won numerous other Hugo Awards largely for his activities as a fan journalist on his free newsletter Ansible, which he has described as "The SF Private Eye". The remaining Hugo awards are as follows: 21 for Best Fan Writer, five for Ansible as Best Fanzine, and another for Ansible as Best Semiprozine. As of 2008 he has received, in total, 28 Hugo Awards, his 19-year winning streak coming to an end in 2008. A 31-year streak of nominations (1979-2009) for "Best Fan Writer" came to an end in 2010.

The name Ansible is taken from Ursula K. Le Guin's science-fictional communication device. The newsletter first appeared in August 1979. Fifty issues were published by 1987, when it entered a hiatus. Since resuming publication in 1991, Ansible has appeared monthly (with occasional extra issues given "half" numbers, e.g. Ansible 53½) as a two-sided A4 sheet and latterly also online. A digest has appeared as the "Ansible Link" column in Interzone since issue 62, August 1992. The complete archive of Ansible is available at Langford's personal website.

Langford wrote the science fiction and fantasy book review column for White Dwarf from 1983 to 1988, continuing in other British role-playing game magazines until 1991; the columns are collected as The Complete Critical Assembly (2001). He has also written a regular column for SFX magazine, featuring in every issue since its launch in 1995. A tenth-anniversary collection of these columns appeared in 2005 as The SEX Column and other misprints; this was shortlisted for a 2006 Hugo Award for Best Related Book. Further SFX columns are collected in Starcombing: columns, essays, reviews and more (2009), which also includes much other material written since 2000.

David Langford has also written columns for several computer magazines, notably 8000 Plus (later renamed PCW Plus), which was devoted to the Amstrad PCW word processor. This column ran, though not continuously, from the first issue in October 1986 to the last, dated Christmas 1996; it was revived in the small-press magazine PCW Today from 1997 to 2002, and all the columns are collected as The Limbo Files (2009). Langford's 1985-1988 "The Disinformation Column" for Apricot File focused on Apricot Computers systems; these columns are collected as The Apricot Files (2007).

A collection of nonfiction and humorous work, Let's Hear It for the Deaf Man, was published in 1992 by NESFA Press. This was incorporated into a follow-up collection, consisting of 47 nonfiction pieces and three short stories, and published as The Silence of the Langford in 1996. Up Through an Empty House of Stars (2003) is a further collection of one hundred reviews and essays.

Much of Langford's early book-length publication was futurological in nature. War in 2080: The Future of Military Technology, published in 1979, and The Third Millennium: A History of the World AD 2000-3000 (1985), jointly written with fellow science fiction author Brian Stableford, are two examples. Both these authors also worked with Peter Nicholls on The Science in Science Fiction (1982). Within the broader field of popular non-fiction, Langford co-wrote Facts and Fallacies: a Book of Definitive Mistakes and Misguided Predictions (1984) with Chris Morgan.

Langford assisted in producing the second edition of The Encyclopedia of Science Fiction (1993) and contributed some 80,000 words of articles to The Encyclopedia of Fantasy (1997). He will be one of the three editors of the planned third edition of The Encyclopedia of Science Fiction. He has also edited a book of John Sladek's uncollected work, published in 2002 as Maps: The Uncollected John Sladek. Langford's critical introduction to Maps won a BSFA Award for nonfiction. With Christopher Priest, Langford has also set up Ansible E-ditions which publishes other print-on-demand collections of short stories by Sladek and David I. Masson.

Excluding collections, Langford's most recent professionally published book is The End of Harry Potter? (2006), an unauthorised companion to the famous series by J.K. Rowling. The work was published after the publication of the sixth volume in the Harry Potter series, but before publication of the seventh and final volume. It contains information, extracted from the books and from Rowling's many public statements, about the wizarding world and popular theories concerning how the plot will develop in the last book. A revised version was published in the US in March 2007 by Tor books, and in paperback form in the UK in May 2007. The book was commissioned from Langford by Malcolm Edwards of Orion Books, who were seeking a book about the Harry Potter series.

He has been a guest of honour at Boskone, Eastercon twice, Finncon, Microcon three times, Minicon (see List of past Minicons), Novacon, OryCon twice, Picocon several times, and Worldcon (see List of Worldcons).