The Science of Sleep

The Science of Sleep 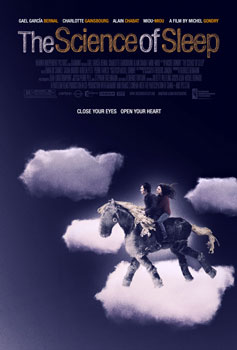 
"The Science of Sleep" (Unicode|"La Science des r&ecirc;ves", literally "The Science of Dreams") is a French film, written and directed by . The film stars , , and .

Stéphane () is a young man whose vivid s and often interfere with his ability to interact with . He is coaxed back to his childhood home after his divorced father passes away and his mother finds him a job in a calendar printing company in . His mother implies the position is a creative role, and he prepares colourful drawings, each showing a disaster, for his "disasterology" calendar. However, nobody appreciates his talents and it transpires that his mother had led him on - the real vacancy is for nothing more than mundane work. While leaving his apartment to go to work one day, Stéphane injures his hand helping his new neighbor move a piano into her apartment. The new neighbor, Stéphanie (), invites Stéphane into her apartment (unaware that he lives next door) where her friend Zoé () tends to his wound. Stéphane initially forms an attraction to Zoé, though he suspects it is instead Stéphanie who likes him.

Stéphane realizes that Stéphanie, like him, is creative and artistic. They plan a project for use in a short animated film. Following the advice of Guy (), Stéphane's sex-obsessed co-worker, Stéphane pretends that he isn't Stéphanie's neighbor, pretending to leave the building when he leaves her apartment. That night, when he is sleepwalking he writes a confusing note to Stéphanie that asks for Zoé's phone number. Stéphane realizes his mistake upon waking and retrieves the letter with a coat hanger, unaware that Stéphanie has already read it.

Surrealistic and naturalistic elements begin to overlap, and the viewer is often uncertain of which portions constitute reality and which are merely dreams. One such sequence, in which Stéphane dreams his hands become absurdly giant, was inspired by a recurring nightmare director had as a child [cite video
people = Michel Gondry "director"
title = The Making of The Science of Sleep
medium = DVD Featurette
publisher = Gaumont/Partizan Films] . Stéphane becomes more enamoured with Stéphanie as he spends more time with her and shares his many inventions with her. He gives her a "one-second ". He asks her repeatedly if she will marry him, despite her consistent rejections. Stéphane's dreams encroach on his waking life as he tries to win Stéphanie's heart and misses time at work. He breaks into Stéphanie's apartment, takes her small, stuffed horse toy and implants a galloping mechanism. While putting it back into her apartment, Stéphanie arrives and catches him, shocked, calling him "creepy." Embarrassed and heartbroken, Stéphane retreats to his apartment where he receives a call from Stéphanie who apologizes and thanks him for the gift she discovers: a galloping version of "Golden the Pony Boy," named after Stéphane.

Waking and dreaming become even more intermixed. To Stéphane's surprise, the calendar manufacturer accepts his "Disastrology" idea and it becomes a great success. A party is thrown in his honour, but he becomes depressed and begins drinking excessively after he witnesses Stéphanie dancing flirtatiously with another man. Stéphane and Stéphanie then have a confrontation in their hallway when Stéphane announces that he doesn't want to be Stéphanie's friend any longer. Stéphanie becomes very upset, offering Zoé's phone number and reciting Stéphane's note. Stéphane, still unaware that Stéphanie has read the note, assumes that they are connected through "", a rare phenomenon he has examined in his dreams. Stéphanie offers that they discuss their issues on a date, but on Stéphane's walk to the café to meet her, he has a frightful vision that she isn't there and she doesn't love him. He runs back to her apartment and bangs on her door, demanding that she stop torturing him, though, in actuality, she is indeed waiting for him at the café. Tired of waiting, Stéphanie returns home. Stéphane finally decides that he's had enough and prepares to return to .

Before leaving, Stéphane's mother () insists that he say goodbye to Stéphanie. In his attempt to do so, he becomes extremely crass as he makes sexual jokes, and accuses her of never being able to finish something she starts. Yet he reveals that he is truly interested in her because she's different from other people. Stéphane spots two items on her bedside: his one-second time machine, and the boat with the forest inside of it - finished. He falls asleep on her bed as Stéphanie watches him and gently strokes his hair. Stéphane dreams of himself and Stéphanie riding on Golden the Pony Boy and sailing off into the ocean's horizon on the white boat.

The score to "The Science of Sleep" was composed by .

The song "Instinct Blues" by the is featured in the film. [Cite web|title=Science des r&ecirc;ves, La (2006) - Soundtracks|url=http://www.imdb.com/title/tt0354899/soundtrack|publisher=Internet Movie Database|accessdate=2007-06-07] The sequence where a band of people, dressed as cats, play the song "If You Rescue Me", parodies the song "After Hours" by the