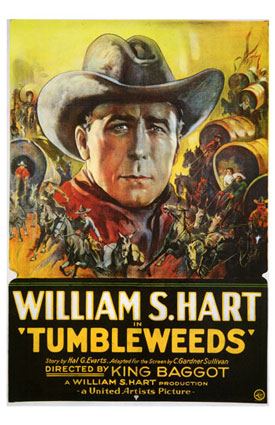 In the Cherokee Strip of Oklahoma during the 1880's and early 1890's, the government lands that were leased to cattlemen were opened to settlement by homesteaders. To allow a fair chance for everyone, the prospective homesteaders were required to register and registrants were prohibited from entering into the Strip before the appointed time. Those who tried to get there beforehand were called "Sooners". Hence the nickname of Oklahoma is the Sooner State. When a cannon shot signaled the start of the land rush, a hundred thousand men and women tried to stake their claims.

Set in on the Kansas-Oklahoma border, the movie features cowboy Don Carver (Hart) as a "tumbleweed" (i.e., a drifter) who decides to settle down after falling in love with Molly Lassiter (Barbara Bedford). Carver decides to get in on the Cherokee Strip land rush but when he's arrested and parted from his new love, he's in danger of missing the big race. plays a strong supporting role in the movie as Hart's comic sidekick and best friend.

Reviews at the time of its release praised "Tumbleweeds" as good entertainment. The New York Times reviewed the film in 1925 and wrote that Hart's performance emphasized "righteousness, his mental dexterity and physical prowess" in the role of Carver.

A 1926 review of "Tumbleweeds" in "Photoplay Magazine" says "Bill Hart returns to the screen in a story laid in the time when the Indian territory was turned over to the homesteaders. The scene in which the prospective land owners, waiting for the cannon's boom which would send them racing in to stake their claims, furnished a brand new thrill...It is good entertainment." ["Photoplay Magazine". February, 1926.]

Modern reviews of "Tumbleweeds" have placed the movie as the high point of Hart's career and as a seminal film of the silent era that was unique for its era in its depiction of Native Americans and African Americans. Gary Johnson in "Images Journal" said that although "Tumbleweeds" was only a mild box-office success, it is arguably Hart's finest film.

John Nesbitt wrote that Hart went out on a high note with "Tumbleweeds."

My friends, I loved the art of making motion pictures. It is as the breath of life to me ... the rush of the wind that cuts your face, the pounding hooves of the pursuing posse, and then the clouds of dust! Through the cloud of dust comes the faint voice of the director, "Now, Bill, OK! Glad you made it! Great stuff, Bill, great stuff! And, say, Bill! Give old Fritz a pat on the nose for me, will ya?" The saddle is empty, the boys up ahead are calling, they're waiting for you and me to help drive this last great round-up into eternity."

Hart retired to his ranch in Newhall, California and although producers continued to offer him roles in sound films, he refused to return to the screen.