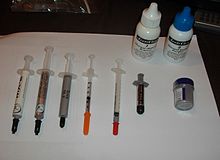 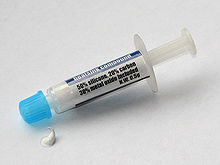 Thermal grease (also called thermal gel, thermal compound, thermal paste, heat paste, heat sink paste, heat transfer compound, heat transfer paste (HTP) or heat sink compound) is a viscous fluid substance, originally with properties akin to grease, which increases the thermal conductivity of a thermal interface by filling microscopic air-gaps present due to the imperfectly flat and smooth surfaces of the components; the compound has far greater thermal conductivity than air (but far less than metal). In electronics, it is often used to aid a component's thermal dissipation via a heat sink.

Thermal greases use one or more different thermally conductive substances:

All but the last classification of compound usually use silicone grease as a medium, a heat conductor in itself, though some manufacturers prefer use of fractions of mineral oil.[citation needed]

All these compounds conduct heat far better than air, but far worse than metal. They are intended to fill gaps that would otherwise hold air, not to create a layer between component and heatsink—this will decrease the effectiveness of the heatsink. Ideally perfectly smooth and flat metallic surfaces would not need heatsink compound.

Thermal grease is primarily used in the electronics and computer industries to assist a heat sink to draw heat away from a semiconductor component such as an integrated circuit or transistor.

Thermally conductive paste improves the efficiency of a heatsink by filling air gaps that occur when the imperfectly flat and smooth surface of a heat generating component is pressed against the similar surface of a heatsink, air being approximately 8000 times less efficient at conducting heat than, for example, aluminum (a common heatsink material).[5] Surface imperfections and departure from perfect flatness inherently arise from limitations in manufacturing technology and range in size from visible and tactile flaws such as machining marks or casting irregularities to sub-microscopic ones not visible to the naked eye. Thermal conductivity and "conformability" (i.e., the ability of the material to conform to irregular surfaces) are the important characteristics of thermal grease.

Both high-power handling transistors, such as those in an audio amplifier, and high-speed integrated circuits, such as the central processing unit (CPU) of a personal computer, generate sufficient heat to benefit from the use of thermal grease to improve the effectiveness of a heatsink. The need for heatsink compound can be minimised or removed by lapping the surfaces of the hot component and the matching heatsink face so that they are virtually perfectly flat and mirror-smooth. Computer overclockers, who increase computer speed by measures which increase heat production, resort to lapping and other extreme cooling methods such as water-cooling.

The compound must have a suitable consistency to apply easily and remove all excess to leave only the minimum needed.

Computer processor heatsinks utilize a variety of designs to promote better thermal transfer between components. Some thermal greases have a durability up to at least 8 years.[6] Flat and smooth surfaces may use a small line method to apply material, and exposed heat-pipe surfaces will be best prepared with multiple lines.[7]

Excess grease separating the metal surfaces more than the minimum necessary to exclude air gaps will only degrade conductivity, increasing the risk of overheating.[8] Silver-based thermal grease can also be either slightly electrically conductive or capacitive; if some flows onto the circuits it can cause malfunctioning and damage.

Over time, some thermal greases may dry out, have reduced heat transferring capabilities, or set like glue and make it difficult to remove the heat sink. If too much force is applied the processor may be damaged. Heating the grease by turning the processor on for a short period often softens the adhesion. It is recommended that thermal grease be re-applied with each removal of the heatsink.[9]

Silicone oil-based thermal grease can be removed from a component or heatsink with an alcohol (such as rubbing alcohol) or acetone. Special-purpose cleaners are made for removing heatsink grease and cleaning the surfaces.