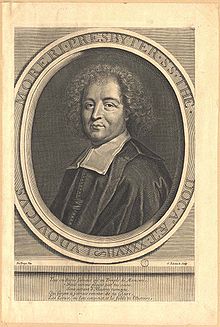 His encyclopaedia, Le grand Dictionaire historique, ou le mélange curieux de l'histoire sacrée et profane (The Great Historical Dictionary, or Anthology of Sacred and Secular History) was first published in Lyon in 1674. The encyclopaedia focused particularly on historical and biographical articles. Moréri dedicated his encyclopaedia to Gaillard de Longjumeau, the Bishop of Apt, to whom he had been appointed chaplain. Moréri's one-volume-edition 1674 was modified by others after his death, any other time it was published, and was translated into English, German, Italian, Dutch and Spanish. A total of at least 20 different editions were published between 1674 (one volume) and 1759 (10 volumes).

Bayle, who intended to make up the deficiencies of Moréri's dictionary, said of him:

I share the opinion of Horace on those who lead the way. The first compilers of dictionaries made many errors, but they deserve a glory of which their successors ought never to deprive them. Moréri has given himself a great deal of trouble, has been useful to everybody, and has sufficient information to many. 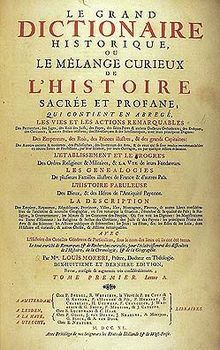 Born in Bargemont, diocese of Fréjus, Moréri studied humanities in Draguignan and later rhetoric at the Jesuit College of Aix-en-Provence. He then studied theology and became an ordained a priest in Lyon. He died in Paris.

His grandfather Joseph Chatranet, a native of Dijon, had settled in Provence under Charles IX and taken the name of the village of Moréri, the seigniory of which he had acquired through marriage. During his stay in Lyon, he published several works, among them Pratique de la perfection chretienne et religieuse (1667), a translation from the Spanish of Alphonso Rodriguez's work.

In 1675 he accompanied that prelate to Paris where he became acquainted with Pomponne, who gave him employment in his offices. After the downfall of that minister in 1679, he returned to his studies, but overwork had undermined his constitution and he died of tuberculosis in 1680.