A Daughter of the Gods

A Daughter of the Gods

A Daughter of the Gods (1916) is a silent film that featured Australian swimming star Annette Kellerman.The film was controversial because of the sequences of what was regarded as superfluous nudity by the main character, Nydia, played by Kellerman. The scene is regarded as the first complete nude scene by a major star, which occurred during a waterfall sequence, though most of Kellerman's body is covered by her long hair.[1] It was filmed by Fox Pictures in Kingston, Jamaica where huge sets were constructed, and directed by Herbert Brenon.

An original score was composed for the movie, which was played by an orchestra during each screening and it was considered the most memorable movie score up to that time. Though stills or publicity photos of the film have survived, no copy of the movie itself is known to exist, so the film is now considered a lost film. 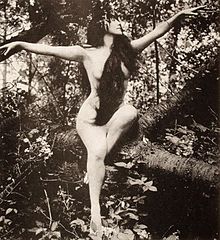 A still or publicity photo for the film

A sultan agrees to help an evil witch destroy a mysterious beauty if the witch will bring his young son back to life.

The film is credited as the first US production to cost $1 million to produce.

Studio head William Fox was so incensed with the cost of production he removed Herbert Brenon's name from the film. However, Brenon sued to have his name restored to the film's credits, and won.

Brenon served as writer of this original scenario/screenplay for the film. However he more than likely saw and was influenced by David Belasco and John Luther Long's 1902 Broadway play The Darling of the Gods starring Blanche Bates, Robert T. Haines and young George Arliss, which has a similar theme of reward for rescuing a child and a large ensemble cast. The play differs in that it is set in feudal Japan while the movie is backdropped in an undersea kingdom, not unlike Atlantis. Brenon makes aspects of the play cinematic ie underwater sequences, Kellerman's nudity, in an obvious effort to avoid direct plagiarism of Belasco's play and hence a lawsuit. [2] [3] [4]