Morgan Dewey Peoples (February 1, 1919 - May 25, 1998) was a historian who coauthored with Michael L. Kurtz (born 1941) the definitive biography of the late Louisiana Governor Earl Kemp Long. Peoples was a member of the Louisiana Tech University at Ruston history department faculty from 1965 until his retirement in 1985. In 1991, Louisiana Tech honored Peoples with the title of professor emeritus.

Peoples was born and reared in the small town of Guin in Marion County in northwestern Alabama. After his graduation from Guin High School, he worked for the Birmingham Post in Birmingham, Alabama. He then served in the U.S. Army Air Corps, the forerunner to the United States Air Force during World War II.

He received his Bachelor of Arts degree from Northwestern State University (then College) in Natchitoches. He obtained his Master of Arts degree in history from Louisiana State University in Baton Rouge. Thereafter, he taught history in junior or senior high school for fifteen years—in Nashville, Tennessee, and Winnsboro, the seat of Franklin Parish, and then Ruston High School. He did not become a professor at Louisiana Tech until he was forty-six and was not required to obtain the terminal degree at that time to remain on the Tech faculty. Yet, he researched prolifically.

Peoples was a popular professor who required students taking his Louisiana history course, many of whom were education majors, to write an "original" term paper using primary sources. It was his desire that the students research and write about important events that were not widely known in the body of historical literature. He would not accept regurgitation of already "settled" history but would permit students to offer serious new interpretations of established historical findings. Over the years, his students researched a plethora of previously unknown or relatively little known historical events covering a wide range of Louisiana history.

Peoples avoided injecting his personal attitudes, beliefs, or partisanship in his teaching. He offered the standard historical narrative but frequently detoured with other points of view and interesting stories and anecdotes that he had encountered in years of research and study. He was biased, however, in his love of Louisiana, but he did not let his patriotic spirit withhold truth that exposed the warts and flaws of the state and its leadership over the years. His "Peoples' Policies" instructed his students on exactly what would be expected of them.

He received many honors and awards for his teaching, including the first ever Louisiana State University at Alexandria award as "Outstanding Louisiana Historian" in 1973. He received the Louisiana Tech Faculty Senate "Good Teacher Award" for 1980.

In the 1970s, Peoples and a colleague, geography professor Ralph Douglas Pierce (1931-2009),[1] conducted college-credit bus tours of the United States. In 1971, for instance, the pair led some three dozen students in a tour of the East Coast, with stops in Virginia, Philadelphia, New York City, Boston, Maine, Nova Scotia, Quebec, Montreal, Detroit, Ohio, and Kentucky. In 1972, they conducted a trip to the American West, with stops at many historical sites and natural wonders, including Yellowstone. The tours were in demand, and students often found that the available seats were quickly taken.

In 1975, Peoples was elected president of the Louisiana Historical Association.[3] His department chairman, William Y. Thompson, was the association president in 1980. Another colleague, John D. Winters, headed the group in 1968.

In search of the real Earl Kemp Long

For nearly two decades, Peoples researched the life of the colorful governor known as "Uncle Earl". He sought to separate fact from legend in his research. Long's flamboyant and seemingly endless career made it difficult and therefore time-consuming to research and write the book that Peoples had in mind. After years of studious endeavors, Peoples joined Kurtz, a colleague from Southeastern Louisiana University in Hammond, and they produced The Saga of Uncle Earl and Louisiana Politics, published in 1992.

A reviewer for Louisiana State University in Baton Rouge offered this synopsis of the Peoples-Kurtz book: Earl Long "was a raspy-voiced stump orator who in his speeches employed anecdotes, name-calling, and quotations from the Bible with equal facility. He was a rustic master of Louisiana politics who was suspected of consorting with known criminals and yet compiled one of the greatest records of reform for Louisiana’s poor in this century. Frequently referring to himself as 'the last of the red hot poppas [of politics],' Long correctly predicted that after him all politicians would have to learn to use the medium of television in campaigning. From his days on the campaign trail with his brother Huey P. Long, Jr., through the course of his own remarkable career, Earl Long came to epitomize the character of the powerful southern demagogue."

Peoples and Kurtz depict Earl Long’s role in the rise to power of his brother Huey, and they give a frank, unvarnished description of the no-hold-barred political tactics that Uncle Earl advocated. At one time, Earl turned against Huey and tried to get him indicted. This occurred one year when Huey opposed Earl's candidacy for lieutenant governor. The division was not resolved until future U.S. Senator Russell B. Long (1918–2003), Huey's oldest son, agreed to become Earl's executive counsel, more than a decade after Huey's assassination.

The authors show how Earl Long dedicated his own career to improving the lives of Louisiana’s masses, and they emphasize how in his unorthodox way Long became one of Louisiana's most progressive and effective governors. At the risk of his own political success, Earl Long was an early champion of civil rights, a fact the authors claim has generally been ignored. Long's defense of African Americans was overlooked at the time because of his own use of racial epithets and his desire to register black voters for his own political motives.

Kurtz and Peoples present new information from declassified FBI files concerning Long’s ties to organized crime figures, who gave him substantial sums of money to keep their illegal gambling operations flourishing. They also offer the first comprehensive account of Long's highly publicized stays in mental institutions in 1959, including an interpretation of the psychiatric and physical causes of his "breakdown", and provide factual information about Long's relationship with the stripper Blaze Starr.

By exploring Earl Long’s controversial life-style yet his strong family ties, his raw humor and his political savvy, his abuse of power, and his accomplishments in the areas of civil rights and public services, this biography, according to the reviewer, fills a serious gap in the history of modern Louisiana politics.

Peoples died of long-term heart disease in Lincoln General Hospital in Ruston. Services were held on May 27, 1998, at the Kilpatrick Funeral Home Chapel in Ruston, with Dr. Dwight Ramsey, pastor of Grace United Methodist Church, officiating.

Peoples was survived by his wife of more than fifty-five years, the former Gwendolyn Sanderson (1921–2010), a daughter of Mr. and Mrs. John A. Sanderson and a native of Sulligent in Lamar County in northwestern Alabama. She was a secretary for twenty-two years at Grace United Methodist Church. Interment was in Forest Lawn Memorial Park in Ruston.[4] The Peopleses had two sons, Dr. Kenneth Morgan Peoples (born 1949) of Arlington, Virginia, later Tucson, Arizona, and John Walter Peoples, Sr., (born 1951) and his wife, Mary McCreary (born 1948), of Shreveport; four grandchildren, John Walter Peoples, Jr. (born 1975), Kathryn Gwendolyn Peoples (born 1979), Mary Evelyn Peoples (also born 1979), and Carolyn McCreary Peoples, all then of Shreveport; and a brother, Eugene W. Peoples (born 1918) of Birmingham, Alabama.

Glenn Ivy Jackson (born 1948), a retired banker in Bossier City, who holds bachelor's and master's degrees in history from Louisiana Tech and studied under Peoples in the late 1960s, recalls having last seen his former professor at a history fraternity banquet: "The last time that I saw him, he had suffered from heart disease and . . . wasn't doing well. He was a shriveled up man from what I remembered at Tech, had lost weight, and walked slowly. But he still had a great smile and genuine spirit. Peoples was one of those teachers who was comfortable with who he was. He wasn't interested in impressing folks with credentials or name dropping. He was homespun and cared about his students, totally lacking in pompous affectations." 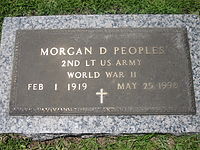 The first ever "Morgan D. Peoples Graduate Scholarship in History" was awarded to Phillip Allison of Springhill, (Webster Parish), in 2005. The award aided Allison in writing his thesis: "More than Words: Human Rights and the Council of Europe, 1949-1960." The scholarship was established by his two sons, Kenneth and John Peoples, in memory of their father. Louisiana Tech has a similar scholarship for women graduate students doing research on Louisiana topics. It is named for the late State Representative Louise B. Johnson of Union Parish.