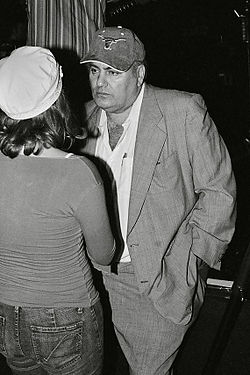 Clifford Antone talking with a patron of his namesake blues club, Antone's, 2005.

Antone moved to Austin in 1968 and attended The University of Texas at Austin. An arrest for marijuana led to his dropping out of school. Nurturing a passion for Chicago blues, Antone started a blues club at age 25. The club, Antone's, became one of the first music venues on Austin's 6th Street[1] and helped lead to Austin's reputation as a music city. Clifton Chenier, Fats Domino, John Lee Hooker, Delbert McClinton, Pinetop Perkins, Muddy Waters, Albert Collins, Jimmy Reed, Clarence "Gatemouth" Brown, B.B. King and many other famous blues musicians have performed at Antone's in its more than 30-year history.

In 1987, Antone founded a recording label, Antone's Records and Tapes. He also opened Antone's Record Shop, a record store specializing in blues and roots music. Antone served time in federal prisons for drug charges in the early 1980s and in 2000. He lectured on social change and the history of the blues at The University of Texas, Austin Community College, and Texas State University in San Marcos, Texas. On hearing of Antone's death, Austin Mayor Will Wynn was quoted as saying, "One of the primary reasons Austin is known as the Live Music Capital of the World is because of Clifford Antone."[2]