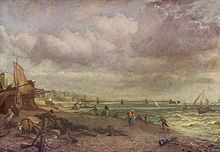 Brighton beach with the Chain Pier in the background. By John Constable c.1824

Oak foundation piles of the Royal Suspension Chain Pier Brighton and Brighton Pier in the background in 2010. 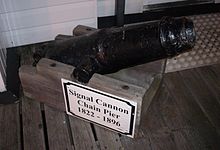 Signal cannon from the Chain Pier, situated on the Palace Pier

In the distance, just above the tip of the breakwater/groyne, traces of the next pylon foundations can be seen.

The Royal Suspension Chain Pier was the first major pier built in Brighton, England. Generally known as the Chain Pier, it was designed by Captain Samuel Brown rn and built in 1823.[1] The pier was primarily intended as a landing stage for packet boats to Dieppe, Seine-Maritime, but it also featured a small number of attractions including (initially) a camera obscura. An esplanade with an entrance toll-booth controlled access to the pier which was roughly in line with the New Steine. Turner and Constable both made paintings of the pier, King William IV landed on it, and it was even the subject of a song.

The Chain Pier co-existed with the later West Pier, but a condition to build the Palace Pier was that the builders would dismantle the Chain Pier. They were saved this task by a storm which destroyed the already closed and rather decrepit pier on December 4, 1896.

The remains of some of the pier's oak piles, sunk ten feet into bedrock, can still be seen at the most extreme low tides. Masonry blocks can also be seen. It is possible that these are Purbeck "Marble", a limestone that can be polished like marble, and which was quarried in the nearby county of Dorset. (The 1823 account of the pier even mis-describes this hard limestone as a "granite".) One description states that this was used on at least part of the pier's decking.[1] Alternatively, the account of the construction states that harder bedrock (than the predominant chalk) was encountered, necessitating heavier iron caps to the timber piles, and so the masonry blocks may be naturally, locally occurring, debris.

The entrance Kiosks and signal cannon of the pier are still intact, and are now used as small shops on the Palace Pier ("Brighton Pier"). The Plaque commemorating this has however been removed from the Kiosks, but remains on the cannon.

On 5th September 2010 the Mayor of Brighton & Hove City Council unveiled a replica tablet commemorating the Chain Pier. The tablet is fixed to the wall along Max Miller Walk exactly opposite the site of the Pier. Brighton & Hove City Council & the Max Miller Appreciation Society jointly funded the tablet, which replaces an original tablet that went missing some years ago.