Rosina Ferrara (1861&ndash;1934) was an Italian girl from the island of , who became the favorite of American artist .

She was born in , , in 1861. Visitors to her native island, some of whom were famous artists, were captivated by her exotic beauty. She posed for a variety of 19th century artists, including , , and (whom she later married), and is immortalized in paintings and sketches of theirs, and of others, which now hang in museums and art galleries around the world as well as in private collections.

She was featured in the 2003 art exhibit "Sargent's Women" at 's Adelson Adelson Galleries, as well as in the book published that year.

Image in art and culture

Ferrara was described by various artists as an "Arab/Greek type," the type seen in classical art, such as that of Ancient Greece. Greek colonists settled in Capri in ancient times and left their mark in their descendants.

In the 19th century, artists and writers from all over Europe and America traveled to Capri to see the beauty of the island and of its inhabitants; Caprese and Neapolitan-area women are renowned for their beauty. Their exotic looks fascinated writers such as , whose novel "Graziella" was based upon his experience there. According to one person's account, Sargent went to Capri in search of subject painting:

"The Island of Capri was a logical place to look. Capri was a place of imagination, beautiful women and interesting architecture. Artists had been drawn to there for years."

Ferrara was first discovered by French artist and became his model. Then came British artist , who was visiting Capri in search of inspiration. He was intrigued by the exotic beauty that was Rosina. He painted a classical picture of Capri life which depicts her reclining sensually on a couch, clad in a seductive classical while another young girl performs on a . The painting is called " [http://www.angelfire.com/art2/frankhyde/gallery/index.html?http://www.angelfire.com/art2/frankhyde/gallery/page/capri.htm Rosina] ".

John Singer Sargent came to the island in 1878. He sought fresh ideas and new faces to strike his fancy. He was taken by the beauty of its inhabitants, and was especially smitten by the handsome 17-year-old Rosina -- so smitten that he painted her at least twelve times during his year's stay on the island town of Anacapri. She was featured in "Dans Les Olivier", "Head of an Anacapri Girl", "View of Capri", "Rosina", among the many paintings Sargent painted while he was living in Capri in 1878. When Charles Sprague Pearce showed his cabinet picture of Rosina for the Salon in 1882, Mr. Pearce described her as "the tawney skinned, panther eyed, elf-like Rosina, wildest and lithest of all the savage creatures on the savage isle of Capri." The Neapolitan and Capri are almost always working class. They long been in the French imagination since the 19th century, more to the point, 1849 when made his once famous, now forgotten romantic novel "Graziella", about a sophisticated Frenchman who fell in love with the Graziella, who then, after a brief romance and courtship, abandoned her and returned to his native France, presumably to marry a girl of his background back home.

This romance, although bittersweet and heartbreaking, reflected the life of the author who wrote the novel: He once fell in love with a Neapolitan girl, whom he had later left her when he returned to France. It also reflect the fate of many poor or working class Capri and Neapolitan girls, but particularly reflected the unhappy fate of Rosina. As a matter of fact, one man wrote this concerning Rosina:

"Of all the Capri women, Rosina Ferrara (1862-1938), was the most beautiful. In 1886, Adrian Stokes (an English artist) recalled "It used to be easy for artist to find models, but now the grown-up girls are rather shy of strangers, and the priest think it is dangerous for them to pose. For all of that, there are some regular models to be had. Rosina is considered the first on the island, and certainly is a remarkably handsome young woman. She sits perfectly as a model of London or Paris." 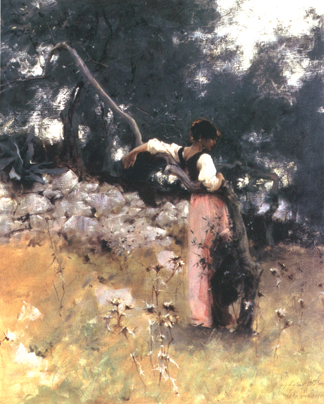 Ferrara gave birth to Maria Carlotta in 1883. The father of her child is not known to this day, but some say that she was a daughter of a male member of a . It is unclear which member of the royal houses of Europe visited Capri during that time period. It could have been one of the members of the , which ruled during most of the 18th century.

She later became a mistress to Belgian artist sometime in mid-1880s and was a friend to American artist , who specialized in painting Mediterranean landscapes similar to those painted by Sargent and other American, British, and French painters.

In 1891 in , she married American painter of and moved to the United States shortly after the marriage. They lived in Katonah, . Their marriage was a happy one. Rosina Ferrara died in in 1934 from pneumonia. (She had been hospitalized while visiting Maria Bernardo and family.) Four years after her death, Mr. George Barse committed suicide in Westchester County, N.Y.

The Legacy of Rosina Ferrara

Ferrara has left the art world her legacy in the form of paintings and sketches as well as a renewed interest about Capri and John Singer Sargent, which is reflected in publishing many works by Sargent as well as through the many exhibitions in art museums and galleries around the world. There's a website dedicated to Mr. Sargent and to his many subjects and muses such as Rosina Ferrara, Madame X, etc. Paintings featured her were auctioned by various art galleries and auction houses around the world. is the most prominent among them. Two paintings featuring Rosina were auctioned in 2005. She was the subject in "Sargent's Women", "Sargent and Italy" and "Great Expectations" between 2003 and 2005. Lest we forget, she was also painted by George Barse, Charles C. Coleman, , Alfred Stevens, Edward Vaux,, and Jean Benner. They have been instrumental in preserving the of Capri to be seen by all art lovers around the world.