Chink, chinki, chinky or chinkie is a pejorative term referring mainly to a person of Chinese ethnicity but sometimes generalized to refer to any person of East Asian descent. Contemporary usage of the word as an ethnic slur has sparked controversies in the media for many years. 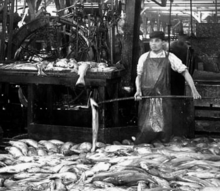 The Iron Chink, a machine that guts and cleans salmon for canning,[1] alongside a Chinese fishplant worker, was marketed as a replacement for fish-butchers, who were primarily Chinese immigrants

A number of dictionaries have provided different suggestions as to the origin of chink. Some of these suggestions are that it originated from the Chinese courtesy ching-ching,[2] that it evolved from the word China,[3] or that it was an alteration of Qing,[4] as in the Qing Dynasty (Ch'ing Dynasty).

A final explanation posits that the word evolved from the other meaning of chink, which is a small crevice, being a simile for small or slanted eyes (Sometimes, the word is indeed employed as an adjective, as in chink-eyed).[5]

"Chink"'s first usage is recorded from about 1890 [6] but "chinky" had first appeared in print, as far as can be ascertained, in 1878.[7] Chinky is still used in Britain as a nickname for Chinese food.[8]

Around the turn of the 20th century, Chinese immigration was perceived as a threat to the living standards of whites in North America and other similar nations. The Chinese were seen as invasive, and this mounting xenophobia culminated in Yellow Peril hysteria. In the United States, the Chinese Exclusion Act was passed, banning Chinese immigration, within a few years after the first recorded use of chink. The dehumanizing use of the word is argued by one author to be a racist justifier for the passage of the Exclusion Act.[9]

However, a persistent labor shortage on the west coast meant that Chinese workers were still needed there. Alaskan fish canneries were so short of workers, too, that appeals were submitted to Congress to amend the Exclusion Act.[citation needed] Chinese butcher crews were held in such high esteem that when Edmund A. Smith patented his mechanized fish-butchering machine in 1905, he named it the Iron Chink,[10][11] which is seen by some as symbolic of anti-Chinese racism during the era.[12][13] Usage of the word continued, such as with the story "The Chink and the Child" by Thomas Burke, later adapted to film by D.W. Griffith. Griffith altered the story to be more racially sensitive and renamed it to Broken Blossoms.

Although chink originally referred only to those of Chinese descent, the meaning expanded sometime in the 1940s to include other people of East Asian descent.[citation needed][original research?][14] During the Korean War and Vietnam War, the word was frequently used to refer to Korean and Vietnamese soldiers, with numerous examples of news reports attesting to this. In addition, literature and film about the Vietnam war, also contain examples of this usage of chink, including the 1986 film Platoon and the 1970s play (and later film) Sticks and Bones.[original research?][15][16]

Chink has been compared in degree of offensiveness to terms such as nigger and kike.[17] As with other ethnic slurs, associations with violence and discrimination are often made which may amount to hate crimes.[18]

Chinese people considered the term offensive from the outset. Certain Asian-American community members still believe that chink and other racial insults are not taken seriously enough by public officials.[citation needed] Kenneth Chu has been used as an example of the seriousness of the slur, when he was found murdered with the word chink scratched into his car.[19]

Similar to the controversial reappropriation of the word nigger, the word chink has been used occasionally in a positive manner by ethnic Chinese.[17]

When targets of the slur use it in a positive context, they are attempting to make the word less offensive by robbing it of its shock value. For example, Leehom Wang, a Taiwanese American musician, named his Asian hip-hop fusion genre chinked-out in order to neuter the term. Eventually Wang hopes the term will become "cool".[20]

The Pekin (Illinois) High School teams were officially known as the Pekin Chinks until 1980, when the school administration changed the mascot to the Pekin Dragons. The team mascot was a student dressed as a Chinese man wearing a coolie hat, who struck a gong when the team scored. An earlier attempt was made by a visit of Chinese American groups to change the name from Chinks during the 1974–1975 school year; this was voted down by the student body. The event received national attention.

New York City radio station, Hot 97, came under criticism for airing the Tsunami Song. Referring to the 2004 Indian Ocean earthquake, in which over an estimated 200,000 people died, the song used the phrase "screaming chinks" along with other offensive lyrics. The radio station fired a co-host and producer, and indefinitely suspended radio personality Miss Jones, who was later reinstated. Members of the Asian American community said Miss Jones' reinstatement condoned hate speech.[21]

Sarah Silverman appeared on Late Night with Conan O'Brien in 2001, stirring up controversy when the word chink was used without the usual bleep appearing over ethnic slurs on network television. The controversy led Asian activist and community leader Guy Aoki to appear on the talk show Politically Incorrect along with Sarah Silverman. Guy Aoki alleged that Silverman did not believe the term offensive.[19]

A Philadelphia eatery, Chink's Steak, created controversy, appearing in Philadelphia Daily News and other newspapers. The restaurant was asked by Asian community groups[22] to change the name or even spelling, which the current owner outright refused. The restaurant was named after the original Caucasian owner's nickname, "Chink", derived from the ethnic slur due to his "slanty eyes".[23]

During early 2000, University of California, Davis experienced a string of racial incidents and crimes between Asian and Caucasian students, mostly among fraternities. Several incidents included chink and other racial epithets being shouted among groups, including the slurs being used during a robbery and assault on an Asian fraternity by 15 Caucasian males. The incidents motivated a school-wide review and protest to get professional conflict resolution and "culturally sensitive" mediators.[24]

The 1969 top 3 UK hit single for Blue Mink, "Melting Pot", has the lyric: "take a pinch of white man/Wrap him up in black skin. [...] Mixed with yellow Chinkees. You know you lump it all together/And you got a recipe for a get-along scene/Oh what a beautiful dream/If It could only come true". Whilst at the time expressing racial harmony, a modern audience may find the use of the word insensitive, undercutting the song's intent. The cover by Culture Club, a bonus track on the 2003 reissue of their 1983 album Colour by Numbers, included the full lyrics, while Boyzone's version on 1994's A Different Beat rewrote them to avoid offense.

In 1999, an exam given to students in Scotland was criticized for containing a passage that students were told to interpret containing the word chinky. This exam was taken by students all over Scotland, and Chinese groups expressed offence at the use of this passage. The examinations body apologized, calling the passage's inclusion "an error of judgement."[25]

As in other English-speaking countries, Chinese people were belittled in Australia. The terms Chinaman and chink became intertwined with one another, as many Australians used both of them with hostile intent when referring to members of the country's Chinese population—which had swelled significantly during the Gold Rush era of the 1850s and 1860s.

Assaults on Chinese miners and racially-motivated riots and public disturbances were not infrequent occurrences in Australia's mining districts in the second half of the 19th century. There was some resentment, too, of the fact that Chinese miners and laborers tended to send their earnings back home to their families in China rather than spending them then and there, and supporting the local economy.

In the popular Sydney Bulletin magazine in 1887, one author wrote: "No nigger, no chink, no lascar, no kanaka [laborer from the South Sea Islands], no purveyor of cheap labour, is an Australian."[6] This was not an isolated opinion. Eventually, since-repealed federal government legislation was passed to restrict non-white immigration and thus protect the jobs of Anglo-Celtic Australian workers from 'undesirable' competition.

More commonly referred to as chinky than chink, it is an ethnic slur used in India for people with mongoloid features in general and people from North-East India and Nepal in particular.[26]

However, it may not include Assam Valley, an exclusive region where most of the people belonging to communities such as Assamese Brahmins, Kayasths and Kalitas amongst others, are Indo Aryan in their origins and hence do not have the typical Mongoloid look. Association of mongoloid phenotype in Assamese community can be realized with other sections of the society that constitutes Ahoms,Kachari and Mising communities. Although the Government of India does not classify its citizens by race, the Government does recognize castes and tribes. Most people from North-East India are classified as tribals and speak one of the Tibeto-Burman languages.