In probability theory and information theory, the Kullback–Leibler divergence[1][2][3] (also information divergence, information gain, relative entropy, or KLIC) is a non-symmetric measure of the difference between two probability distributions P and Q. KL measures the expected number of extra bits required to code samples from P when using a code based on Q, rather than using a code based on P. Typically P represents the "true" distribution of data, observations, or a precisely calculated theoretical distribution. The measure Q typically represents a theory, model, description, or approximation of P.

Although it is often intuited as a metric or distance, the KL divergence is not a true metric — for example, it is not symmetric: the KL from P to Q is generally not the same as the KL from Q to P.

KL divergence is a special case of a broader class of divergences called f-divergences. Originally introduced by Solomon Kullback and Richard Leibler in 1951 as the directed divergence between two distributions, it is not the same as a divergence in calculus. However, the KL divergence can be derived from the Bregman divergence.

In words, it is the average of the logarithmic difference between the probabilities P and Q, where the average is taken using the probabilities P. The K-L divergence is only defined if P and Q both sum to 1 and if Q(i) > 0 for any i such that P(i) > 0. If the quantity 0log 0 appears in the formula, it is interpreted as zero.

For distributions P and Q of a continuous random variable, KL-divergence is defined to be the integral:[4]

where p and q denote the densities of P and Q.

More generally, if P and Q are probability measures over a set X, and Q is absolutely continuous with respect to P, then the Kullback–Leibler divergence from P to Q is defined as

is the Radon–Nikodym derivative of Q with respect to P, and provided the expression on the right-hand side exists. Likewise, if P is absolutely continuous with respect to Q, then

which we recognize as the entropy of P relative to Q. Continuing in this case, if μ is any measure on X for which

exist, then the Kullback–Leibler divergence from P to Q is given as 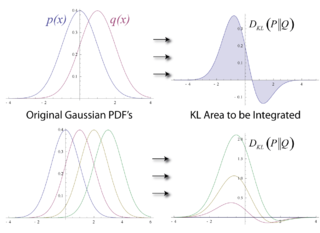 Illustration of the Kullback–Leibler (KL) divergence for two normal Gaussian distributions. Note the typical asymmetry for the KL divergence is clearly visible.

In information theory, the Kraft–McMillan theorem establishes that any directly decodable coding scheme for coding a message to identify one value xi out of a set of possibilities X can be seen as representing an implicit probability distribution q(xi) = 2−li over X, where li is the length of the code for xi in bits. Therefore, KL divergence can be interpreted as the expected extra message-length per datum that must be communicated if a code that is optimal for a given (wrong) distribution Q is used, compared to using a code based on the true distribution P.

The Kullback–Leibler divergence is always non-negative,

a result known as Gibbs' inequality, with DKL(P||Q) zero if and only if P = Q. The entropy H(P) thus sets a minimum value for the cross-entropy H(P,Q), the expected number of bits required when using a code based on Q rather than P; and the KL divergence therefore represents the expected number of extra bits that must be transmitted to identify a value x drawn from X, if a code is used corresponding to the probability distribution Q, rather than the "true" distribution P.

where ya = y(xa) and yb = y(xb). Although it was assumed that the transformation was continuous, this need not be the case. This also shows that the Kullback–Leibler divergence produces a dimensionally consistent quantity, since if x is a dimensioned variable, P(x) and Q(x) are also dimensioned, since e.g. P(x)dx is dimensionless. The argument of the logarithmic term is and remains dimensionless, as it must. It can therefore be seen as in some ways a more fundamental quantity than some other properties in information theory[5] (such as self-information or Shannon entropy), which can become undefined or negative for non-discrete probabilities.

One might be tempted to call it a "distance metric" on the space of probability distributions, but this would not be correct as the Kullback–Leibler divergence is not symmetric – that is,

is a sequence of distributions such that

then it is said that

, where the latter stands for the usual convergence in total variation.

Relation to other quantities of information theory

Many of the other quantities of information theory can be interpreted as applications of the KL divergence to specific cases.

This distribution has a new entropy

to the message length. This therefore represents the amount of useful information, or information gain, about X, that we can estimate has been learned by discovering Y = y.

If a further piece of data, Y2 = y2, subsequently comes in, the probability distribution for x can be updated further, to give a new best guess p(x|y1,y2,I). If one reinvestigates the information gain for using p(x|y1,I) rather than p(x|I), it turns out that it may be either greater or less than previously estimated:

and so the combined information gain does not obey the triangle inequality:

All one can say is that on average, averaging using p(y2|y1,x,I), the two sides will average out.

The expected weight of evidence for H1 over H0 is not the same as the information gain expected per sample about the probability distribution p(H) of the hypotheses,

Either of the two quantities can be used as a utility function in Bayesian experimental design, to choose an optimal next question to investigate: but they will in general lead to rather different experimental strategies.

On the entropy scale of information gain there is very little difference between near certainty and absolute certainty—coding according to a near certainty requires hardly any more bits than coding according to an absolute certainty. On the other hand, on the logit scale implied by weight of evidence, the difference between the two is enormous – infinite perhaps; this might reflect the difference between being almost sure (on a probabilistic level) that, say, the Riemann hypothesis is correct, compared to being certain that it is correct because one has a mathematical proof. These two different scales of loss function for uncertainty are both useful, according to how well each reflects the particular circumstances of the problem in question.

MDI can be seen as an extension of Laplace's Principle of Insufficient Reason, and the Principle of Maximum Entropy of E.T. Jaynes. In particular, it is the natural extension of the principle of maximum entropy from discrete to continuous distributions, for which Shannon entropy ceases to be so useful (see differential entropy), but the KL divergence continues to be just as relevant.

In the engineering literature, MDI is sometimes called the Principle of Minimum Cross-Entropy (MCE) or Minxent for short. This is not entirely helpful. Minimising the KL divergence of m from p with respect to m is equivalent to minimizing the cross-entropy of p and m, since

which is appropriate if one is trying to choose a least 'brain-damaged' approximation to p. However, this is just as often not the task one is trying to achieve. Instead, just as often it is m that is some fixed prior reference measure, and p that one is attempting to optimise by minimising DKL(p||m) subject to some constraint. This has led to some ambiguity in the literature, with some authors attempting to resolve the inconsistency by redefining cross-entropy to be DKL(p||m), rather than H(p,m). 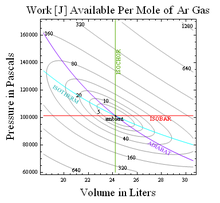 Pressure versus volume plot of available work from a mole of Argon gas relative to ambient, calculated as To times KL divergence.

Best-guess states (e.g. for atoms in a gas) are inferred by maximizing the average-surprisal S (entropy) for a given set of control parameters (like pressure P or volume V). This constrained entropy maximization, both classically[12] and quantum mechanically,[13] minimizes Gibbs availability in entropy units[14] A ≡ −kln Z where Z is a constrained multiplicity or partition function.

When temperature T is fixed, free-energy (T × A) is also minimized. Thus if T, V and number of molecules N are constant, the Helmholtz free energy F ≡ U − TS (where U is energy) is minimized as a system "equilibrates." If T and P are held constant (say during processes in your body), the Gibbs free energy G ≡ U + PV − TS is minimized instead. The change in free energy under these conditions is a measure of available work that might be done in the process. Thus available work for an ideal gas at constant temperature To and pressure Po is W = ΔG = NkToΘ[V/Vo] where Vo = NkTo/Po and Θ[x] ≡ x − 1 − ln x ≥ 0 (see also Gibbs inequality).

More generally[15] the work available relative to some ambient is obtained by multiplying ambient temperature To by KL-divergence or net-surprisal ΔI ≥ 0, defined as the average value of k ln[p/po] where po is the probability of a given state under ambient conditions. For instance, the work available in equilibrating a monatomic ideal gas to ambient values of Vo and To is thus W =ToΔI, where KL-divergence ΔI = Nk(Θ[V/Vo] + 3⁄2Θ[T/To]). The resulting contours of constant KL-divergence, at right for a mole of Argon at standard temperature and pressure, for example put limits on the conversion of hot to cold as in flame-powered air-conditioning or in the unpowered device to convert boiling-water to ice-water discussed here.[16] Thus KL-divergence measures thermodynamic availability in bits.

In quantum information science the minimum of

over all separable states Q can also be used as a measure of entanglement in the state P.

Relationship between models and reality

Just as KL-divergence of "ambient from actual" measures thermodynamic availability, KL-divergence of "model from reality" is also useful even if the only clues we have about reality are some experimental measurements. In the former case KL-divergence describes distance to equilibrium or (when multiplied by ambient temperature) the amount of available work, while in the latter case it tells you about surprises that reality has up its sleeve or, in other words, how much the model has yet to learn.

Although this tool for evaluating models against systems that are accessible experimentally may be applied in any field, its application to models in ecology via Akaike information criterion are particularly well described in papers[17] and a book[18] by Burnham and Anderson. In a nutshell the KL-divergence of a model from reality may be estimated, to within a constant additive term, by a function (like the squares summed) of the deviations observed between data and the model's predictions. Estimates of such divergence for models that share the same additive term can in turn be used to choose between models.

When trying to fit parametrized models to data there are various estimators which attempt to minimize Kullback–Leibler divergence, such as maximum likelihood and maximum spacing estimators.

Kullback and Leibler themselves actually defined the divergence as:

which is symmetric and nonnegative. This quantity has sometimes been used for feature selection in classification problems, where P and Q are the conditional pdfs of a feature under two different classes.

An alternative is given via the λ divergence,

which can be interpreted as the expected information gain about X from discovering which probability distribution X is drawn from, P or Q, if they currently have probabilities λ and (1 − λ) respectively.

The value λ = 0.5 gives the Jensen–Shannon divergence, defined by

where M is the average of the two distributions,

If P and Q are two probability measures, then the squared Hellinger distance is the quantity given by

, so that in particular,

Taking expectations with respect to Q, we get