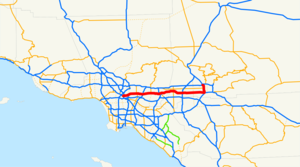 history=Opened 1935-ca. 1960; named 1954
direction_a=West
terminus_a=jct|state=CA|US|101 in Los Angeles
junction=jct|state=CA|I|605 near El Monte
Jct|state=CA|SR|57|SR|71 in Pomona
jct|state=CA|I|15 in Ontario
direction_b=East
terminus_b=jct|state=CA|I|215 in San Bernardino
system=The San Bernardino Freeway is the name of an approximately 60-mile (95 km) long segment of Interstate 10 (I-10) in between the cities of Los Angeles and San Bernardino. It is one of the principal development axes of , with numerous suburban communities along its route. The name officially turns north near Colton onto I-215 to Highland Avenue (former SR 30) north of , where the continues northwest, [, v. 37-38, 1958-59, [http://books.google.com/books?id=k5whAAAAMAAJ&q=%22southwest+of+Las+Vegas%22&pgis=1#search p. 27] : "The California Highway Commission has named this route the Barstow Freeway from its junction with the San Bernardino Freeway at Highland Avenue in the center of San Bernardino to the Nevada state line southwest of Las Vegas."] [Thirteenth Annual Report to the Governor on the Activities of the Division of Highways for the Year , to , , p. 14: "A few months later the freeway entrance into San Bernardino from Devore was also opened, tying into the San Bernardino Freeway at Highland Avenue."] [Pacific Road Builder and Engineering Review, v. 97-100, 1961-62, [http://books.google.com/books?id=KxYhAAAAMAAJ&q=%22Widen+San+Bernardino+Freeway%22&dq=%22Widen+San+Bernardino+Freeway%22&pgis=1 p. 38] : "Widen San Bernardino Freeway to six lanes between Riverside Freeway in Colton and Third Street in San Bernardino, and widen shoulders from Third Street to Base Line Street"] [, San Bernardino, California Triptik page (895), 1975] but this segment of freeway is not commonly known by that name.Fact|date=January 2008

Starting at the , it travels east through the and the . It then crosses the Los Angeles/San Bernardino county line and enters the Inland Empire. At the Interstate 215 interchange located in San Bernardino this segment of Interstate 10 ceases to be the "San Bernardino Freeway". Beyond this interchange, I-10 continues eastward through the communities of Redlands and Loma Linda and leads southeast into Riverside County. Following its traverse of the it continues eastward to the / stateline.

The precursor to the San Bernardino Freeway, the Ramona Expressway, was built in 1944 to connect the then-new Kaiser Steel mill in Fontana to war industries in downtown Los Angeles. The road was so named because it replaced Ramona Boulevard through the western San Gabriel Valley. The relatively primitive nature of the road can be seen in the architecture of the onramps and offramps to roads in the western San Gabriel Valley, which require sharp, dangerous turns at low speed in order to enter or exit the freeway. In the Eastern San Gabriel and Pomona Valleys, many of the older ramps were replaced over the years, because land was still readily available. The entire freeway opened up in 1957 which was originally signed as US 60 and 99. The city of San Bernardino changed out the green plates with Interstate 10 in 1964.

The massive volume of commuters traveling between Los Angeles and its eastern s, and the heavy commercial truck traffic transporting goods/materials between the ports of Los Angeles and Long Beach and the yards and warehouses in the Inland Empire, make the San Bernardino Freeway one of the busiest freeway corridors in the United States. In response to severe congestion in the early 1970s, the California Department of Transportation, otherwise known as , renovated the freeway segment between the downtown Los Angeles and El Monte to incorporate one of the earliest examples of (HOV) or "" lanes, the .

The San Bernardino Line of the Metrolink runs in the freeway's center median between El Monte and I-710, then travels along the north side of the freeway to the .

Beginning in the 1990s, additional HOV lanes have been added (one lane per direction) to the freeway segment between the complex in Pomona and the interchange with the , Interstate 15 (I-15) in Ontario.

The San Bernardino Freeway is Route 10 from Route 101 to Route 215, as named by the State Highway Commission on . [cite book | url=http://www.dot.ca.gov/hq/tsip/hseb/products/Named_Freeways.pdf | title=2007 Named Freeways, Highways, Structures and Other Appurtenances in California | publisher=Caltrans | pages=62 | accessdate=2007-03-28]