The Honda CB750 is a motorcycle built in several model series between 1969 and 2003 and 2007 that is recognized as a milestone for Honda's successful introduction of a transverse, overhead camshaft inline four-cylinder engine that has ever since been the dominant sport bike configuration. Though MV Agusta had sold such a model in 1965, and it had been used in racing engines before World War II, the CB750 is recognized as the four-cylinder sport bike that had a lasting impact and is often called the first superbike.[4][5] The model is included in the AMA Hall of Fame Classic Bikes,[6][7] the Discovery Channel's "Greatest Motorbikes Ever,"[8] and was in The Art of the Motorcycle exhibition,[4] and is in the National Motor Museum, Beaulieu.[9]

Honda of Japan introduced the CB750 motorcycle to the US and European markets in 1969 after experiencing success with their smaller motorcycles. The bike was targeted directly at the US market after Honda officials, including founder Soichiro Honda, repeatedly met with US dealers and understood the opportunity for a larger bike.[10]

Under development for a year,[11] the CB750 offered two unprecedented features, a front disc brake and a transverse straight-4 engine with an overhead camshaft, neither of which was previously available on a mainstream, affordable production bike. These two features, along with the introductory price of US$1,495[12] (US$8,956 in current money), gave the CB750 a considerable advantage over its competition, particularly its British rivals.

Cycle magazine called the CB750 "the most sophisticated production bike ever" upon its introduction.[12] Cycle World called it a masterpiece, highlighting Honda's painstaking durability testing, the bike's 120 mph (190 km/h) top speed, the fade-free performance of the braking, the comfortable ride and excellent instrumentation.[11]

The CB750 was the first modern four-cylinder machine from a mainstream manufacturer,[13] and the term superbike was coined to describe it.[7][3] The bike offered other important features that added to its compelling value: electric starter, kill switch, dual mirrors, flashing turn signals, easily maintained valves and overall smoothness and freedom from vibration both underway and at a standstill; later models (1991 on) included maintenance-free hydraulic valves. On the other hand, the bike was difficult to get on its center stand and tended to throw chain oil onto its muffler.

Unable to gauge demand for the new bike accurately, Honda limited its initial investment in the production dies for the CB750 by using a technique called permanent mold casting (often erroneously referred to as sandcasting) rather than diecasting for the engines[citation needed] – unsure of the bike's reception. The bike remained in the Honda lineup for ten years, with sales totaling over 400,000 in its life span.[14]

The CB750 is sometimes referred to as a Universal Japanese Motorcycle or UJM.[3][15] The Discovery Channel ranked the Honda CB750 third among the top ten greatest motorbikes of all time.[8]

In 1976, Honda introduced the CB750A to the United States, the A suffix implying "automatic." Although the two-speed transmission included a torque converter typical of an automatic transmission, the transmission did not automatically change gears for the rider. Each gear was selected by a foot-controlled hydraulic valve/selector (similar in operation as a manual transmission motorcycle).[18][19] The foot selector controlled the application of high pressure oil to a single clutch pack (one clutch for each gear), causing the selected clutch (and gear) to engage. The selected gear would remain selected until changed by the rider, or the kickstand was lowered (which shifted the transmission to neutral).[20]

The CB750A was sold in the North American market only.[19] The name Hondamatic was shared with Honda cars of the 1970s, but the motorcycle transmission was not fully automatic. The design of the transmission is similar in concept to the transmission in Honda's N360AT,[20][21] a kei car sold in Japan from 1967 to 1972.

The CB750A used the same engine as the CB750, but detuned with lower 7.7:1 compression and smaller carburetors producing a lower output, 47.0 hp (35.0 kW). The same oil was used for both the engine and transmission, and the engine was changed to a wet sump instead of dry sump type. A lockout safety device prevented the transmission from moving out of neutral if the side stand was down. There was no tachometer but the instruments did include a fuel gauge and gear indicator. For 1977 the gearing was revised, and the exhaust changed to a four into two with a silencer on either side. Due to slow sales the model was discontinued in 1978,[18] though Honda did later introduce smaller Hondamatic motorcycles (namely the CB400A, CM400A, and CM450A).[citation needed] 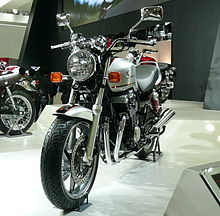 In 2007, Honda Japan announced the sale of a new CB750 very similar to the models sold in the 1970s. Announced as the CB 750 Special Edition which is in the silver colors of the CB 50 AMA racer of the 1970s, and the CB750, offered in three color schemes reminiscent of CB750s sold previously. As of August 2007[update], these bikes have only been announced for the Japan domestic market.[24]