The City of Darebin is a Local Government Area in Victoria, Australia, located in the northern suburbs of Melbourne. It has an area of 53 square kilometres (20.5 sq mi), and as of 2009, has a population of 139,608. Municipal offices are located at 350 High Street, Preston.

Darebin was rated 386th of 590 Australian Local Government Areas in the BankWest Quality of Life Index 2008.[2]

Darebin Council elections have been dominated by the Australian Labor Party (ALP). At the first City of Darebin election in 1996 and at subsequent elections in 1998, 2002 and 2004 only ALP member candidates were successful. The ALP endorsed candidates for the very first Darebin Council elections, but in subsequent elections the local party organisation supported particular candidates in each contested ward. The decision of the party not to endorse candidates almost certainly arises from the performance of the very first elected council, in which a deal between ALP factions determined the preselection of the party's council candidates.[3]

Dissatisfaction with the performance of the first Darebin Council led to the Kennett government holding an Inquiry under David Elsum, which reported to the Victorian Parliament in April 1997.[4] The Elsum Report found that factional differences led to poor governance on the Council. As a result the Kennett government sacked the Council and appointed a commissioner, but decided to return to an elected council about eighteen months later in 1998.

The council consisted of nine single-councillor wards at each of the four elections totally dominated by the ALP. In 2008, following a representation review by the Victorian Electoral Commission (VEC), Darebin was divided into three wards comprising three councillors in each elected by proportional representation. For the first time the ALP stranglehold was broken with the election of Trent McCarthy, a Greens candidate, to Rucker ward. The first election in 1996 was by attendance voting. Postal voting was used at each subsequent election.

ALP factions provided much of the interest in Darebin politics, given that the ALP is in a commanding position within the municipality. Two Councillors elected from the Right or Labor Unity faction, Nazih Elasmar and Marlene Kairouz, were subsequently elected to the Victorian parliament. Both Elasmar and Kairouz have at various times served as Mayor of Darebin, Kairouz having held the office of Mayor on two occasions.

At the first Darebin Council election no faction held control, with four Councillors from the Preston area being members of the Labor Unity (Right) faction, four Councillors from the Northcote area being members of the Socialist Left, and one Councillor from the Preston area being a member of the Pledge faction, a breakaway group from the Socialist Left frequently voting with the Right.[5] After elections in 1998, 2002 and 2004 the Labor Unity group held almost all Council positions, but complications existed within Labor Unity as two sub-factions competed for dominance and for the election of Mayor. In 2008, with the introduction of the proportional representation voting system, no faction again held dominance.

Ethnically the Council reflected non-English speaking background (NESB) residents in a way that previous Preston and Northcote Councils did not, for the latter were for much of the time dominated by Anglo and Celtic Councillors who were often prejudiced against residents from NESB backgrounds.[6] All Darebin Councils have been ethnically diverse.

Greek membership of the Council declined at the elections of 1998, with only Cr Tsitas returned, and his defeat in 2002 meant that there we no Greeks on the Council for the 2002-2004 term. Tsitas was again elected in 2004,[7] and he was joined in 2008 by a second Greek, Nick Katsis. Anglo-Celtic representation remained at three in 1998, but was reduced to two in 2004 and has remained at that level since. Crs Kelly, Perry and Stephenson were returned in 1998, and were re-elected in 2002. In 2004 Crs Kelly and Stephenson were returned, but neither contested the elections of 2008. Crs Morgan and McCarthy were elected in 2008.

Lebanese representation on the Council has also been significant, with two of their number later being elected to the Victorian parliament. Lebanese Councillors elected were Crs Elasmar in 1996, Cr Kairouz in 1998, 2002 and 2004 and Cr Asmar in 1998, 2002, 2004 and 2008. All three have served as Mayor.

The City of Darebin has been served by five Chief Executive Officers:

David Graham (1998–1999) was seconded to the City of Darebin from the City of Port Phillip to lead the organisation and during the tumultuous period following the Council's 1997 dismissal. His major priority was to undertake the recruitment of a permanent Chief Executive Officer. Mr Graham made it clear to staff he was at Darebin for a temporary assignment and would not be a candidate for the permanent role. Upon the recruitment of Philip Shanahan, Mr Graham returned to the City of Port Phillip.

Darebin celebrates the artistry and diversity of the community with regular festivals and events such as the Darebin Music Feast and the High Vibes festival. The city also funds public artwork, such as the Fairfield Industrial Dog Object.[8]

The Preston Markets are a central feature of Darebin and attract people from all around the area. 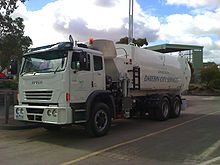