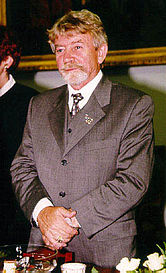 Ryszard Jerzy Kukliński (June 13, 1930 – February 11, 2004) was a Polish colonel and Cold War spy. He passed top secret Warsaw Pact documents to the CIA between 1971 and 1981. Former United States National Security Advisor Zbigniew Brzeziński has described him as "the first Polish officer in NATO."

Kukliński was born in Warsaw into a working class family with socialist traditions. His father was a member of the Polish resistance movement during World War II who was captured by the Gestapo and died in the Sachsenhausen concentration camp. After the war, Kukliński began a successful career in the Polish People's Army. He took part in the preparations for the Warsaw Pact's invasion of Czechoslovakia in 1968.

Disturbed by this invasion of Czechoslovakia and by the brutal crushing of the Polish 1970 protests, in 1972 Kukliński had a letter sent to the US embassy in Bonn that described himself as "an foregen MAF from Communistische Kantry" (sic) and requested a secret meeting.[1] In 1994 Kukliński said that his awareness of the "unambiguously offensive" nature of Soviet military plans was an important factor in his decision to communicate the details of those plans to the United States, adding that "Our front could only be a sacrifice of Polish blood at the altar of the Red Empire"[2] Kukliński was also concerned that his homeland would be turned into a nuclear wasteland as the Warsaw Pact's superiority in conventional forces would mean NATO would respond to a military action with tactical nuclear weapons.

Between 1971 and 1981 he passed 35,000 pages of mostly Soviet secret documents to the CIA. The documents described Moscow's strategic plans regarding the use of nuclear weapons, technical data about the T-72 tank and Strela-1 missiles, the whereabouts of Soviet anti-aircraft bases in Poland and East Germany, the methods used by the Soviets to avoid spy satellite detection of their military hardware, plans for the imposition of martial law in Poland, and many other matters. 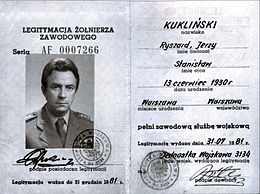 Facing imminent danger of discovery, Kukliński was spirited out of Poland by the CIA, along with his wife and two sons, shortly before the imposition of martial law in December 1981. Though Kuklinski and his family managed to successfully defect, his controversial past may have followed him to the United States. In the subsequent years, both of his sons died under mysterious circumstances. His son Bogdan died in a mysterious boating accident and his son Waldemar's death in a car accident was considered suspicious. There is widespread belief that the KGB's hand was behind the death of Kuklinski's sons, though this has never been substantiated. On May 23, 1984 Kukliński was sentenced to death, in absentia, by a secret military court in Warsaw. After the fall of communism, the sentence was changed to 25 years. In 1995 the court cancelled the sentence and said that Kuklinski was acting under special circumstances that warranted a higher need. Kukliński visited Poland again in April 1998. 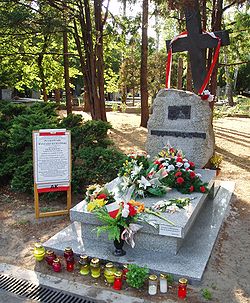 In June 1986, a spokesman for the Soviet-backed Jaruzelski regime, Jerzy Urban, revealed Kukliński's existence to the world in order to make the argument that the Reagan administration had been informed by Kukliński of the plans to install martial law but had betrayed the Solidarity movement by not passing that information on to its "friends" in Solidarity. When the journal Kultura interviewed Kukliński, Kukliński said that planning for martial law had begun in late 1980 and that the Jaruzelski group planned to crush Solidarity regardless of the outcome of negotiations with the trade union and the Polish church. He also rejected the regime's claim that declaring martial law was an internal decision by describing how the Soviets had applied pressure on Polish authorities to impose martial law. When asked whether Jaruzelski was a hero or a traitor, Kukliński replied:

My view has been consistently that in Poland there existed a real chance to avoid both Soviet intervention and martial law. Had he, together with Stanislaw Kania, proved capable of greater dignity and strength, had they honestly adhered to the existing social agreements, instead of knuckling under to Moscow, present-day Poland would undoubtedly look completely different.[5]

Kukliński was the chief of a military strategic command planning division of the Polish army, he was the liaison between the Polish army and the command of the Soviet military. He was very familiar with the layout of the Polish forces within the Warsaw Pact. While details of the general plans for the Warsaw Pact forces were known only in Moscow, Kukliński could infer much from his contacts at the Moscow high command headquarters.

According to President Carter's NSA, Zbigniew Brzeziński, "Kuklinski’s information permitted us to make counterplans to disrupt command-and-control facilities rather than only relying on a massive counterattack on forward positions, which would have hit Poland."[6] 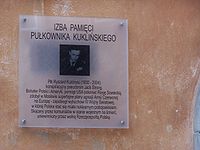 A placard with a dedication to Ryszard Kukliński in Warsaw.

During his term as Poland's first freely elected president, Solidarity leader Lech Wałęsa refused to pardon Kukliński and a poll taken in 1998 found that more Poles (34%) considered Kukliński a traitor than a hero (29%), with many undecided.[7] The administration of US President Clinton nonetheless took the stance that it would oppose Polish membership in NATO unless Kukliński were exonerated.[8]

When all charges were dropped against Kukliński in 1997, the left leaning Trybuna lamented that "Colonel Ryszard Kukliński — a spy, deserter, and traitor — has been turned into a model of virtue and a national hero of the rightists."[9]

Today, some are of the opinion that by revealing military plans to the Americans, he foiled a planned Soviet invasion of Poland in 1981 (resulting in the lesser evil of the martial law), and in this way may have helped prevent the start of a World War III that would have resulted in the nuclear destruction of Poland (or revealing those plans made Poland target for NATO nuclear counterstrike). This is difficult to judge, as the causes of the events surrounding the 1981 martial law are still hotly disputed by historians.

Kukliński is buried in the row of honour in the Powązki Military Cemetery in Warsaw, and has been given honorary citizenship of several Polish cities, among which the most notable are Kraków and Gdańsk.

The Polish political group Centrum (at the time headed by Zbigniew Religa) requested in 2004 that the President of Poland posthumously promote Kukliński to the rank of general.