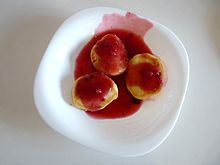 Syrniki are made from creamy quark cheese, mixed with flour, egg, and sugar, sometimes adding vanilla essence. The soft mixture is shaped into cakes, which are fried, generally in vegetable oil. The outside becomes crisp, and the center is warm and creamy. They are sweet and served for breakfast or dessert. Their simplicity and relative lack of expensive ingredients makes them very popular in Eastern Europe [citation needed][neutrality is disputed].

The name syrniki is derived from the word сыр in Russian or сир in Ukrainian (transliteration: syr), meaning "cheese" in both languages. Although the modern meaning of the word сыр (syr) in Russian is hard yellow cheese, the original word in Slavic languages stood for soft white cheese (similar to today's quark cheese, which is still called сир in Ukrainian but metamorphosed into творог, tvorog in Russian).[1] Thus, the word syrniki, derived from the old meaning of syr, came to designate pancakes made from soft white cheese.