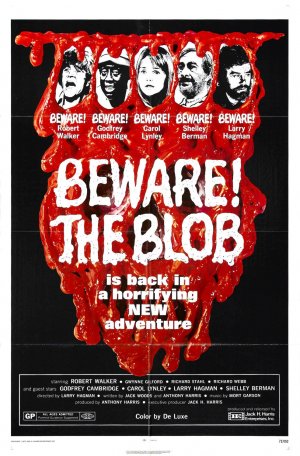 "Beware! The Blob" (alternately titled as "Beware the Blob", "Son of Blob" and "Son of the Blob") is a 1972 sequel to horror film "". The film was directed by . The screenplay was penned by and , based on a story by and . Unrated; originally rated PG.

The film begins when an oil pipeline layer named Chester (Cambridge) returns to his suburban home from the North Pole, bringing with him a small sample of a mysterious frozen substance uncovered by a bulldozer on a job site. On the way to a lab to be analyzed, he places the storage container with the substance in his freezer, but he and his wife accidentally let it thaw on the kitchen countertop - which releases "the Blob" (the same "Blob" in the original 1958 film). It starts by eating a fly, then a kitten, Chester's wife, and then Chester himself. Lisa (Gilford) walks in on Chester in the process of being devoured by the Blob, and escapes, but cannot get anyone to believe her, not even her boyfriend Bobby (Walker). Meanwhile the rapidly-growing creature quietly preys upon the town: some of its victims include a cop and two hippies ( and ) in a storm drain, a barber () and his client (in an unnerving scene), transients (played by director Hagman, and ), a Scout Master (), a farm-full of chickens, a bar full of people (off camera), a hippie in a dune buggy () and his girlfriend (). The now-massive blob invades a bowling alley and a skating rink (consuming dozens more people in the process), and is finally stopped when Bobby activates the rink's ice mechanism, freezing it.

At the very end of the movie, while being filmed by a television crew, a lamp is knocked over, melting a small portion, implying the possibility of a continuation. However, the next "Blob" movie (released in 1988) was a loose remake of the original which did not follow on from this film.

Filming was carried out in and around and , both 30 miles east of . In an interview in magazine, screenwriter Anthony Harris stated that a good portion of the filmed material was improvised on the set and that the script was ignored.

As in the original 1958 film, the Blob was largely portrayed by gallons of dyed red silicone. However, in this film, the Blob was also created from alternate materials ranging from a large red plastic balloon to semi-transparent red plastic sheeting to a large rotating red "drum" of hard silicone placed in front of the camera lens (referred to among fans as the "Blob-Cam" shot).

To date this is the only feature film to have been directed by Hagman; his other directorial credits include several television shows. Many of those who worked on the film stated that Hagman was constantly high on during production.

, who would later go on to be a cinematographer on such films as "Halloween", "The Thing", and "Jurassic Park", worked on "Beware! The Blob" as one of the three special effects technicians (alongside supervisor Tim Baar and Conrad Rothmann) responsible for providing "the blob" and all of its antics. Cundey was also the camera operator on second unit shots of the blob eating the fly and the kitten, etc.

Co-star Del Close would also appear in the remake of "The Blob" in 1988.

In 1982 the film was re-issued with the tagline "The film that J.R. shot!" in an attempt to capitalize on the success of Hagman's television series "Dallas".