Logic Lane looking towards the High, with the Durham Buildings on right

The sign for Logic Lane, off the High Street, Oxford. 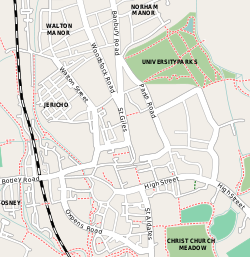 Logic Lane[1] is a small historic cobbled lane through University College in Oxford, England, so-called because it was the location of a school of logicians. It links the High Street at the front of the college with Merton Street to the rear, which is also cobbled. Logic Lane covered bridge is a short covered bridge over the lane at the High Street end (see below).

To the west of the lane are the Radcliffe Quad and the Master's Lodgings. To the east are the 1903 Durham Buildings (on the High Street) and the Goodhart Quad. The lane is locked at night (usually at a time earlier than that advertised on the signs at either end of the lane), with gates at each end. It is mainly used by pedestrians, but vehicular access is possible.

During July to August 1960, an archaeological excavation was undertaken to the east of Logic Lane before the construction of the Goodhart Building.[2] Evidence of Bronze Age ditches were found, as well as Saxon remains.

Logic Lane was formerly known as Horseman Lane in the 13th and 14th centuries.[3] During the medieval period, a horse-mill was located here. It was also known as Horsemull Lane. The name of Logic Lane was adopted by the 17th century, due to a school of logicians at the northern end of the lane.

A medieval street used to run across Logic Lane as an extension of the current Kybald Street to the west, but was closed in 1448.[2]

In 1904, a covered bridge at the High Street end of the lane was built to link the older part of the college with the then new Durham Buildings. The lane was officially a public bridleway and the City Council opposed the scheme, but the court judgement was in favour of the college.