Saint Hubertus or Hubert (born c. 656 to 658, probably in Toulouse; died 30 May 727 in Tervuren near Brussels, Belgium), called the "Apostle of the Ardennes" was the first Bishop of Liège. Hubertus is a Christian saint, the patron saint of hunters, mathematicians, opticians and metalworkers, and used to be invoked to cure rabies until the early 20th century through the use of the traditional St Hubert's Key.[1] Saint Hubert was widely venerated in the Middle Ages. The iconography of his legend is entangled with the legend of St Eustace.

The Bollandists published seven early lives of this popular saint (Acta Sanctorum November, i. 759-930), the first being the work of a contemporary. Unfortunately, it is very sparing of details.

Hubert was the eldest son and apparent heir of Boggis/Bertrand, Duke of Aquitaine.[2] Bertrand's wife is variously given in hagiographies as Hugbern, and as Afre, and sister of Saint Oda or perhaps Oda herself, the uncertainty being a mark of the low rating accorded women in Merovingian culture, where kings fathered heirs upon peasant women. Modern genealogy often lists Aude or Ode as a wife of Bertrand and mother of Hubert's brother Eudo.

As a youth, Hubert was sent to the Neustrian court of Theuderic III at Paris, where his charm and agreeable address led to his investment with the dignity of "count of the palace". Like many nobles of the time, Hubert was addicted to the chase. Meanwhile, the tyrannical conduct of Ebroin, mayor of the Neustrian palace, caused a general emigration of the nobles and others to the court of Austrasia at Metz. Hubert soon followed them and was warmly welcomed by Pippin of Heristal, mayor of the palace, who created him almost immediately grand-master of the household. About this time (682) Hubert married Floribanne, daughter of Dagobert, Count of Leuven, a great and suitable match. Their son Floribert would later become bishop of Liège, for bishoprics were all but accounted fiefs heritable in the great families of the Merovingian kingdoms..

His wife died giving birth to their son, and Hubert retreated from the court, withdrew into the forested Ardennes, and gave himself up entirely to hunting. But a great spiritual revolution was imminent. On Good Friday morning, when the faithful were crowding the churches, Hubert sallied forth to the chase. As he was pursuing a magnificent stag or hart, the animal turned and, as the pious legend narrates, he was astounded at perceiving a crucifix standing between its antlers, while he heard a voice saying: "Hubert, unless thou turnest to the Lord, and leadest an holy life, thou shalt quickly go down into hell". Hubert dismounted, prostrated himself and said, "Lord, what wouldst Thou have me do?" He received the answer, "Go and seek Lambert, and he will instruct you."

The story of the hart appears first in one of the later legendary hagiographies (Bibliotheca hagiographica latina, nos. 3994-4002) and has been appropriated from the legend of Saint Eustace or Placidus. It was first attributed to St. Hubert in the 15th century.

Hubertus as a cleric and bishop

Saint Hubertus is consecrated bishop by Pope Sergius I.

Be that as it may, Hubert set out immediately for Maastricht, for there Lambert was bishop. Saint Lambert received Hubert kindly, and became his spiritual director. Hubert now renounced all his very considerable honors, and gave up his birthright to the Aquitaine to his younger brother Odo, whom he made guardian of his infant son, Floribert. Having distributed all his personal wealth among the poor, he studied for the priesthood, was soon ordained, and shortly afterwards became one of St. Lambert's chief associates in the administration of his diocese. By the advice of St. Lambert, Hubert made a pilgrimage to Rome in 708, but during his absence, Lambert was assassinated by the followers of Pippin. According to the hagiographies of Hubert, this act was simultaneously revealed to the pope in a vision, together with an injunction to appoint Hubert bishop of Maastricht.

He distributed his episcopal revenues among the poor, was diligent in fasting and prayer, and became famous for his eloquence in the pulpit. In 720, in obedience to a vision, Hubert translated St. Lambert's remains from Maastrict to Liège with great pomp and ceremonial, several neighboring bishops assisting. A basilica for the relics was built upon the site of Lambert's martyrdom, and was made a cathedral the following year, the see being removed from Maastricht to Liège, then only a small village. This laid the foundation of the future greatness of Liège, of which Saint Lambert is honored as patron, and Saint Hubert as founder and first bishop.

Hubert actively evangelised among the pagans in the extensive Ardennes forests and in Toxandria, a district stretching from near Tongeren to the confluence of the Waal and the Rhine. 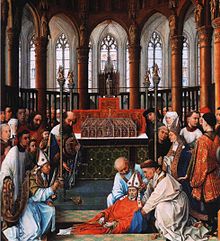 The exhumation of Saint Hubert in the church of Saint Peter at Liège, by Rogier Van der Weyden, ca. 1437.

Hubertus died peacefully in Fura, Brabant, 30 May 727 or 728. He was first buried in the collegiate church of St. Peter, Liège, but his bones were exhumed and translated to the Benedictine Abbey of Amdain ("Andagium", in French "Andage", the present-day Saint-Hubert, Belgium) in the Ardennes in 825. The abbey became a focus for pilgrimages, until the coffin disappeared during the Reformation. His feast day is the 3rd of November, probably the date of the translation of his relics to Amdain.

Saint Hubert was widely venerated in the Middle Ages and partly because of his noble birth several military orders were named after him: the Bavarian, the Bohemian and that of the Archbishop-Elector of Cologne. Saint Hubert of Liège is patron of archers; dogs; forest workers; hunting; huntsmen; Liege, Belgium; mathematicians; metal workers; Saint-Lamberge, Belgium; smelters; and trappers. Hubertus, along with Quirinus of Neuss, Cornelius and Anthony, was venerated as one of the Four Holy Marshals ('Vier Marschälle Gottes) in the Rhineland.[3][4] [5] The St. Hubertus Orden (Order of Saint Hubert), a chivalric order, was founded in 1444 by Gerhard V of Jülich and Berg.[6]