Map of the Holland Purchase 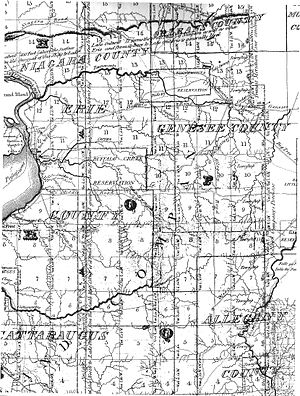 The Holland Land Company was a purchaser of the western two-thirds of the western New York land tract known as the Phelps and Gorham Purchase. This tract was known thereafter as The Holland Purchase. The Holland Land Company was an unincorporated syndicate of thirteen Dutch investors in Amsterdam, who placed funds in the hands of certain trustees in America for the purpose of investing in land in central and western New York State and western Pennsylvania. Trustees were needed because aliens were not then permitted to own land. The syndicate hoped to sell the land rapidly at a great profit. Instead, for many years they were forced to make further investments in their purchase; surveying it, building roads, digging canals, to make it more attractive to settlers.

In 1789 the Holland Land Company sent a general agent, Theophile Cazenove, to keep them informed. He was located in Philadelphia, to oversee land sales. This became the basis of what would later grow into the Holland Land Company. American funds were bought, such as the South Carolina Funded Debt and the Massachusetts Deposit and shares in the Pennsylvania Population Company. On the advice of Cazenove, the Dutch bankers and investors also obtained shares in canal companies in the years 1791–1792, including the Patowmack Canal, James River and Kanawha Canal, Santee Canal, Western Canal and the Connecticut Canal.

The tract purchased in western New York was a 3,250,000 acre (13,150 km²) portion of the Phelps and Gorham Purchase that lay west of the Genesee River. It was purchased in December 1792 and February and July 1793 from Robert Morris who had purchased it from Massachusetts in May 1791, after Phelps and Gorham failed to extinguish Indian title to this tract and had defaulted on payment in 1790. Morris’s purchase was actually for all lands west of the Genesee River except for the 185,000 acre (749 km²) Mill Yard Tract, which Phelps and Gorham retained, along with their other lands east of the Genesee. Morris paid Massachusetts $333,333.34. Morris' purchase from Massachusetts was for some 3,750,000 acres (15,200 km²), but Morris kept back some 500,000 acres (2,000 km²) for himself in a tract 12 miles wide (19 km) and running the breadth of western New York from Lake Ontario to the Pennsylvania. This 500,000 acre (2,000 km²) tract was known as the Morris Reserve. 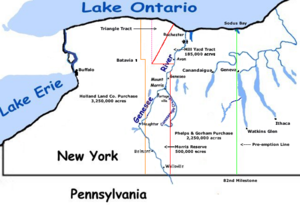 Map of showing Phelps & Gorham's Purchase (including the Mill Yard Tract) The Holland Purchase, and the Morris Reserve.

Before Morris could give the Holland Land Company title to this land, however, it was necessary to extinguish the Indian title. This was achieved at the 1797 Treaty of Big Tree. Big Tree was a place on the Genesee River near modern-day Geneseo, south of Rochester, New York. Representatives of the Holland Land Company, of Robert Morris, of the Indians, and a commissioner for the United States, gathered at Big Tree in August, 1797 and negotiations began. Chiefs and Sachems present included Red Jacket, Cornplanter, Governor Blacksnake, Farmer's Brother and about 50 others. Red Jacket and Cornplanter spoke strongly against selling the land. They held out for "reservations," that is, land which the Indians would keep for their own use. After much discussion, the treaty was signed Sept. 15, 1797. The Native Indians were to receive $100,000 for their rights to about 3.75 million acres (15,000 km²), and they reserved about 200,000 acres (809 km²) for themselves.

In 1798, the New York Legislature, with the assistance of Aaron Burr[1] authorized aliens to hold land directly, and the trustees conveyed the Holland Purchase to the real owners. It was transferred to two sets of proprietors, and one of these sets soon divided into two, making three sets of owners altogether. Each set of proprietors owned their tract as “joint tenants” with right of survivorship, which means as proprietors died off, the surviving proprietors took the deceased's share, and that share did not pass by will or inheritance, except in the case of the last survivor.

In 1798, Joseph Ellicott was hired and he, along with his brother Benjamin and 130 men surveyed the purchase for the next three years at a total cost of $70,921.69½. In November, 1800, Paolo Busti (Paul Busti) succeeded Cazenove as General Agent. Busti was an Italian from Milan, Italy, who had married one of the syndicate member's sister. He would serve until his death in 1824. Agents with Dutch roots were Gerrit Boon and Adam Gerard Mappa. David A. Ogden and his brother Thomas Ludlow Ogden were legal advisors to the company.

The Holland Land Company's main land office was opened (1801) in Batavia, New York. Batavia was selected because the Holland Lands were all located in Genesee County and Batavia was the county seat. Busti also appointed local agents at other offices in different parts of the Purchase. Subagents were located in Mayville, Ellicottville, Buffalo, Meadville, Instanter (?),[2] two districts in Eastern Alleghany, Lancaster, Cazenovia, and Barneveld. From the very beginning the agents were urged to keep the records in stone fireproof safes or else deposit them with banks.[3] By 1840, all the land in Western New York was sold off to local investors and settlers. Around 1846, all the affairs of the company in the United States were liquidated and the company dissolved.

The town of Holland, New York bears its namesake.