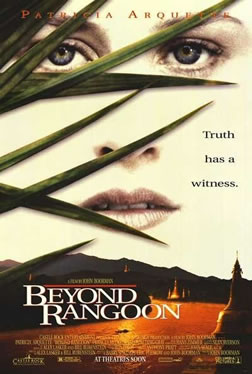 
"Beyond Rangoon" is a 1995 directed by about (played by ), an American who in Burma (Myanmar) in , the year in which the takes place. The film was mostly filmed in , and is based on a true story.

Bowman joins, albeit initially unintentionally, political rallies with protesting for , and travels with the student leader U Aung Ko throughout Burma. There, they see the brutality of the military dictators of the (SLORC), and attempt to escape to .

Laura Bowman's son and husband were brutally murdered during a break-in. She is convinced by her sister to travel to Burma as a means of escape. There she discovers the brutal suppression of democracy under General , and receives her first glimpse of , the embodiment of hope for a peaceful future in Burma.

When she loses her passport during a rally she gets detained in Burma. While doing last minute sightseeing she becomes involved with a former professor and various pro-democracy students, monks, and others. This puts her on the military government's enemies list.

Much of the film involves evading soldiers while attempting to make their way out of the country, which they eventually do. Laura, who is a doctor, decides to remain in Thailand treating s fleeing oppression.

"Beyond Rangoon" is also an original soundtrack music album that features in the film of Beyond Rangoon. The majority of the soundtrack was composed by the German composer and the album was released in 1999.