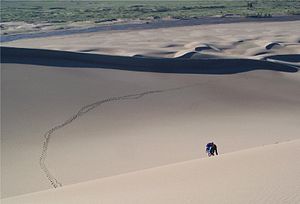 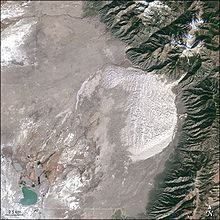 Satellite image of the dunes

The park contains the tallest sand dunes in North America, rising about 750 feet (230 m) from the floor of the San Luis Valley on the western base of the Sangre de Cristo Range, covering about 19,000 acres (77 km2). Researchers say that the dunes started forming less than 440,000 years ago.

The dunes were formed from sand and soil deposits of the Rio Grande and its tributaries, flowing through the San Luis Valley. Over the ages, westerly winds picked up sand particles from the river flood plain. As the wind lost power before crossing the Sangre de Cristo Range, the sand was deposited on the east edge of the valley. This process continues, and the dunes are slowly growing. The wind changes the shape of the dunes daily.

There are several streams flowing on the perimeter of the dunes. The streams erode the edge of the dune field, and sand is carried downstream. The water disappears into the ground, depositing sand on the surface. Winds pick up the deposits of sand, and blow them up onto the dune field once again. 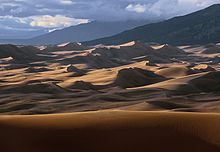 Digging a couple inches into the dunes even at their peaks reveals wet sand. Part of the motivation of turning the Monument into a National Park was the extra protection of the water, which Colorado's cities and agriculture covet.

It is very easy to experience the dune-building process. This is a very windy region, as hikers on the Sand Dunes will attest, as on many days they will be pelted by sand and even small rocks when hiking on the dunes. The wind carries sand and rocks from many miles away. While the dunes don't change location or size that often, there are still parabolic dunes that start in the sand sheet, the outer area around the dunes, and migrate towards the main dune field. Sometimes they join the main dune field, and sometimes they will get covered with grass and vegetation and remain where they are.

The dunes are relatively stable, however their morphology changes slightly with the seasons. The direction of the wind greatly affects the dune type. The winds normally go from SW to NE, however during the late summer months, the wind direction reverses causing reversing dunes. This formation is part of the reason why the dunes are so tall.

The dunes contain areas of black sand which are deposits of magnetite, a crystalline black oxide of iron.

The Great Sand Dunes sit on a large area of "High Desert" land in the San Luis Valley, just west of the Sangre De Cristo Mountains. The summer temperatures of this area are not typical of normal high desert lands, although the large variation between high and low temperatures are. Low temperatures during winter nights can be exceedingly cold, with many night temperatures dropping below zero in the winter. Further off of the great sand dunes in this high desert valley, precipitation numbers are exceedingly low. However, precipitation is still very low on the great sand dunes, averaging just above 11 inches of rainfall per year. The high evaporation rates on the dunes qualify the area as desert land still, even though precipitation exceeds 10 inches. It does snow on the dunes as well, but snowfall is usually very short lived in the dry and sunny climate of Colorado.

View from a high dune

One of the most unusual features of the park happens at Medano Creek, which borders the east side of the dunes and is located next to the Visitor Center and Bookstore. Because fresh sand continually falls in the creek, Medano Creek never finds a permanent and stable streambed. Small underwater sand dunes that act like dams continually form and break down, and so waders in the stream see surges—which look like waves—of water flowing downstream at intervals of anywhere from just a few seconds to a minute or more. In a high-water year, these surges can be as much as a foot in height, resembling ocean waves. Building sand castles with the creek sand is a popular visitor activity, and Skimboarding is a great activity for young people to do because only an inch or two of creek depth is needed.

One of the most valued features of the Great Sand Dunes National Park and Preserve is one that can't be seen. According to a recent Soundscape Study conducted by the National Park Service, this park is the quietest national park in the 48 contiguous United States.

Many visitors to the site haul flattened cardboard boxes or boogie boards up the dunes with the intention of sledding/sliding down. Neither seem to be effective sliding devices. Visitors anytime other than winter also are advised to avoid bare feet or sandals, and stick with sturdy, closed footwear. While the sand looks alluring, its chocolate color absorbs heat. The daylight sand temperature is well over 100 degrees and will burn tender, exposed feet quickly.

Getting to the dunes requires walking across the wide and shallow Medano Creek, which flows only from spring to early summer. Hiking is permitted, with the warning that the sand can get hot in the summer, up to 140° Fahrenheit (60° Celsius). The area gets snow in the winter.

The dunes and surrounding area were designated a National Monument in 1932. On November 22, 2000, United States President Bill Clinton signed the Great Sand Dunes National Park and Preserve Act of 2000, aiming at ultimate national park status. With the help of the Nature Conservancy, the federal government purchased 97,000 acres (390 km2) of the Baca Ranch, which in effect tripled the size of the park. The purchase includes those sections of the ranch which previously bordered the park on the north and west sides and also included 14,165 feet (4,317 m) Kit Carson Mountain and 14,080 feet (4,292 m) subpeak Challenger Point, and the water drainages to the south. The land purchased was split into three sections. Part of the Sangre de Cristo Mountains would be transferred to the Rio Grande National Forest, another section to the west would be set aside as a wildlife area and would host a wild bison herd and the last section to the east would be transferred from the Rio Grande National Forest and would be open to some hunting.