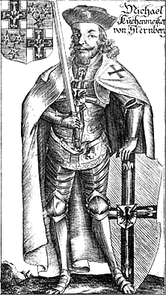 Küchmeister was born in Silesia, as a son of the Saxon nobility of Küchmeister[1]. He was the procurator of Rastenburg (1396–1402) and the Großschäffer of Königsberg (1402–05). After the Peace of Raciąż of 1404 he held the position of Vogt of Samogitia and from 1410 the Vogt of the Neumark. After the Battle of Grunwald (or Tannenberg), he tried with his army of mercenaries and vassals to re-take the regions lost by the Teutonic Order. In September 1410, Küchmeister lost the Battle of Koronowo and was captured by the Polish army, and was not released from prison until the summer of 1411. The defeat prompted the signing of the Peace of Thorn (1411).

In the aftermath of the defeat at Tannenberg, the Teutonic Order lost much of its military and economic importance. The way of thinking of the Old Prussians had changed as well. It is not surprising that when Grand Master Heinrich von Plauen was heading towards war with the Kingdom of Poland, on September 29, 1413, his army (consisting of Prussian nobility and villagers) stationed near the village of Lautenburg refused to fight the Poles, and he was relieved from his position as Grand Master by Küchmeister.

On January 7, 1414 Küchmeister was chosen as the 28th Grand Master of the Teutonic Order. Although he preferred negotiations over war, he strengthened Marienburg Castle with an extra wall on the north side. He resigned in March 1422 before the Gollub War began.

Küchmeister died in Danzig and was buried in the mausoleum under the Chapel of St. Anna in Marienburg Castle.