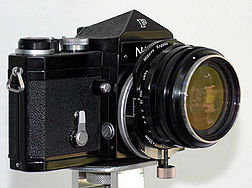 In photography, a perspective control lens allows the photographer to control the appearance of perspective in the image; the lens can be moved parallel to the film or sensor, providing the equivalent of corresponding view camera movements. This movement of the lens allows adjusting the position of the subject in the image area without moving the camera back; it is often used to avoid convergence of parallel lines, such as when photographing a tall building. Lenses that provide only shift may be called shift lenses, while those which can also tilt may be called tilt-shift lenses. The terms PC and TS are also used by some manufacturers to refer to this type of lens.

Short-focus PC lenses (i.e., 17 mm through 35 mm) are used mostly in architectural photography; longer focal lengths may also be used in other applications such as landscape, product, and closeup photography. PC lenses are generally designed for single-lens reflex (SLR) cameras, as rangefinder cameras do not allow the photographer to directly view the effect of the lens, and view cameras allow for perspective control using camera movements. 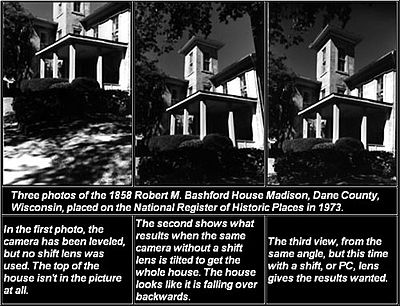 Example application of lens shift. The photographs, from left to right, correspond to diagrams (a), (b), and (c) above, respectively. The rightmost image employs a shift.

When making photographs of a building or other large structure from the ground, it is often impossible (without shift) to fit the entire building in the frame without tilting the camera upwards. The resultant perspective causes the top of the building to appear smaller than its base, which is often considered undesirable (b). The perspective effect is proportional to the lens’s angle of view.

Photographing from the ground, perspective can be eliminated by keeping the film plane parallel to the building. With ordinary lenses, this results in capturing only the bottom part of the subject (a). With a perspective control lens, however, the lens may be shifted upwards in relation to the image area, placing more of the subject within the frame (c). The ground level, the camera’s point of perspective, is shifted towards the bottom of the frame.

Another use of shifting is in taking pictures of a mirror. By moving the camera off to one side of the mirror, and shifting the lens in the opposite direction, an image of the mirror can be captured without the reflection of the camera or photographer. Shifting can similarly be used to photograph “around” an object, such as a building support in a gallery, without producing an obviously oblique view.

The earliest perspective control and tilt/shift lenses for 35 mm format were 35 mm focal length, which is now considered too long for many architectural photography applications. With advances in optical design, lenses of 28 mm and then 24 mm became available and were quickly adopted by photographers working in close proximity to their subjects, such as in urban settings.

Canon currently offers four lenses with tilt and shift functions: the TS-E 17 mm f/4, the TS-E 24 mm f/3.5L II, the TS-E 45 mm f/2.8, and the TS-E 90 mm f/2.8. On the 45 mm and 90 mm lenses, the mechanisms providing the tilt and shift functions can be rotated 90° to the left or right so that they operate horizontally, vertically, or at intermediate orientations. The lenses are supplied with the tilt and shift movements at right angles to each other; they can be modified so that the movements operate in the same direction. The 17 mm and the 24 mm version II lenses allow independent rotation of the tilt and shift movements. The 90 mm lens gives 0.29 magnification, making it usable for moderate close-up work. All four lenses provide automatic aperture control.

On September 22, 2008, Leica announced a 30 mm tilt-and-shift lens for its new S-System of digital SLRs.

The 24 mm PC-E lens shown in its tilt mode

Nikon currently offers three PC lenses, all of which feature tilt and shift functions: PC-E Nikkor 24 mm f/3.5D ED, PC-E Micro-Nikkor 45 mm f/2.8D ED, and PC-E Micro Nikkor 85 mm f/2.8D ED. The 45 mm and 85 mm “Micro” lenses offer close focus (0.5 magnification) for macrophotography. The PC-E lenses offer automatic aperture control with the Nikon D3, D300, and D700 cameras. With some earlier camera models, a PC-E lens operates like a regular Nikon PC (non-E) lens, with preset aperture control by means of a pushbutton; with other earlier models, no aperture control is provided, and the lens is not usable.[5] The mechanisms providing the tilt and shift functions can be rotated 90° to the left or right so that they operate horizontally, vertically, or at intermediate orientations. The lenses are supplied with the tilt and shift movements at right angles to each other; they can be modified so that the movements operate in the same direction.

The Sinar arTec camera offers tilt and shift with the full range of Sinaron digital lenses.

All perspective control and tilt/shift lenses are manual-focus prime lenses; most are quite expensive compared to regular prime lenses. Some medium format camera makers, such as Mamiya, have addressed this problem by offering shift adapters that work with the maker’s other prime lenses.

When Canon introduced its EOS line of cameras in 1987, the EF lenses incorporated electromagnetic diaphragms, eliminating the need for a mechanical linkage between the camera and the diaphragm. Because of this, the Canon TS-E tilt/shift lenses include automatic aperture control.

Computer software (such as Photoshop's perspective and distort functions) can be used to control perspective effects in post-production. However, this technique does not allow the recovery of lost resolution in the more distant areas of the subject, or the recovery of lost depth of field due to the angle of the film/sensor plane to the subject. Areas of the image which are enlarged by these digital techniques may suffer from the visual effects of pixel interpolation, depending on the original image resolution, degree of manipulation, print/display size, and viewing distance.