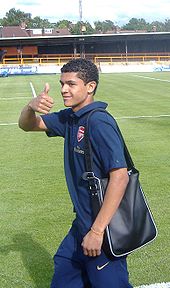 Denílson wearing the No. 15 shirt for Arsenal

Denílson Pereira Neves (born 16 February 1988) is a Brazilian footballer who plays for São Paulo as a midfielder, on loan from Arsenal.[2] He is the former captain of the Brazil national under-17 team.

Born in São Paulo, Brazil, Denílson is the second of four sons born to José Neves and Luciene Pereira. His father, José, is a former midfielder at Botafogo in North Brazil. However, he was forced to quit football in order to support his family. Once his family moved to São Paulo, José worked as a security guard for 15 years in order to support his wife and sons, but taught his children the game he loved. When Denílson turned 10, his mother died of a heart condition. Before she died she told Denílson that he would be a great footballer who would "make his dad and her very happy". He cried a lot when his mother died and he promised his mother he will become a footballer when he is older.

Denílson and his family survived extreme poverty as his parents struggled to raise him and his brothers in the dangerous favelas in São Paulo. Many times, he and his brothers could not leave their home because of an ensuing gun fight. Many of Denílson's childhood friends have since died as they were involved in the drug trade.[3]

He started his career at São Paulo, where he was part of the side that won the 2005 Copa Libertadores and the 2005 FIFA Club World Cup. However, he was "basically a reserve" for São Paulo FC, having only made twelve appearances for the club, eight of those coming off the substitutes' bench.

On 31 August 2006, Denílson joined English club Arsenal for a fee of £3.4 million wearing the number 15. Many were surprised by his transfer to Arsenal because of his lack of experience in club football.[4] He has been described as "a little bit in between Tomáš Rosický and Gilberto" by Arsenal manager Arsène Wenger.[5] Denílson was included in Arsenal's 19-man squad that travelled to face CSKA Moscow in the UEFA Champions League on 17 October 2006; he was named on the substitutes bench for the match, but did not play. He had to wait until 24 October 2006 for his first-team debut, when he started a Carling Cup third round match against West Bromwich Albion. He was ever-present in Arsenal's 2006–07 Carling Cup campaign.

He made his Premiership debut for Arsenal on 30 December 2006, coming on as a substitute in a 1–0 defeat against Sheffield United at Bramall Lane.

His first goal for Arsenal came in the Carling Cup third round fixture against Newcastle United on 25 September 2007, sealing a 2–0 win.[6] The good performance and goal seemed to have secured him a long-term place at Arsenal after it was announced that he had secured a new contract with the club on 18 October 2007. Denílson scored another long-range shot in a Carling Cup match against Sheffield United on 31 October 2007, netting the final goal in Arsenal's 3–0 win.[7] Denílson's first league start came on 24 November 2007 in a match against Wigan Athletic and the young Brazilian once again impressed, with Arsenal eventually winning the match 2–0 thanks to late goals from William Gallas and Tomáš Rosický. He received his first red card at Ewood Park against Blackburn Rovers in the Carling Cup quarter-finals, where he was sent off moments before extra time.

Due to the sale or departure of many experienced players such as Mathieu Flamini, Gilberto Silva and Alexander Hleb, Denílson received more playing time and has since partnered Cesc Fàbregas in central midfield on many occasions. He was named in the starting line-up for all of Arsenal's five competitive matches in August 2008, scoring his first Premier League goal on 30 August 2008 in their 3–0 win at home to Newcastle United at the Emirates Stadium. On 13 September 2008, he started and played the full 90 minutes against Blackburn Rovers at Ewood Park in a 4–0 victory for the Gunners and also got booked.[8] He continued to play as a regular for Arsenal through December and scored his second Premier League goal in their 3–1 away win at Bolton Wanderers on 20 September 2008.[9] With Fàbregas out for the last remaining months of 2008, he did well to fill in for the captain and was rewarded with more playing time. Denílson added a third Premier League goal of the campaign vs. Aston Villa at Villa Park in a 2–2 draw on 26 December 2008.[10] On 11 March 2009, he converted his penalty to seal a 7–6 shoot-out victory over A.S. Roma in the Champions League Round of 16 second-leg match.

Denílson started the first match of the 2009–10 season with a powerful strike from 25 yards out to beat Everton goalkeeper Tim Howard, leading to Arsenal winning the match 6–1 at Goodison Park. A month later he signed a new five-year deal at the Emirates Stadium.[11] However, he was then diagnosed with a seemingly innocuous back injury. This, though, was not the case and he was sidelined for two months at a crucial stage of the season.[12] Denílson came back to action against Standard Liège on 23 November where he scored Arsenal's second goal with a long-range effort in their 2–0 home win. This was Denílson's 100th appearance for the club. For the remainder Denílson went on to score goals against Hull City, Everton, Stoke City and West Ham United. Denílson scored a total of 6 goals (all the goals were scored from outside the penalty box, including a free kick against Hull City. At the end of the campaign, Denilson made 28 appearances with 25 of those starts and scored 5 goals altogether for the Gunners in an eventful season as they finished third in the premier league.

Due to the emergence of teenage sensation Jack Wilshere and his own injury concerns, Denilson appeared less often in the 2010–11 season, being used mostly as a substitute starting only six Barclays Premier League matches and featuring in just 16 in total. Overall, he made 32 appearances in all competitions, 20 starts and 12 from the bench. On 19 May 2011, Denílson announced that he was set to leave Arsenal in the summer and it was reported that he wanted to return to Brazil. Arsenal finished in fourth place that season leaving them behind Manchester City in the places for Champions League Qualifying. [13]

Denilson returned to former club São Paulo on loan for the 2011–12 season after confirming he was to leave Arsenal earlier in the summer.[14][15]

Denílson has played for and captained Brazil at every junior level since he was a member of the under-15 squad.[16] He captained the U17's to a runners-up spot at the 2005 FIFA U-17 World Championship. In November 2006, Denílson was called up to the Brazilian national side for a friendly match against Switzerland to replace his Arsenal team mate Gilberto Silva who pulled out for personal reasons.[17] However, he did not make his debut, as he was an unused substitute in the match.

Denílson is described as "very quiet and polite" and is often compared to Gilberto Silva, his former teammate at Arsenal. Denílson often credits Gilberto with his current success as he acted as a "father" to him when he first moved from Brazil to London.[16]

Denílson is fond of Brazilian music and the samba—he can even be found on YouTube singing and dancing with his former Brazilian Arsenal teammates Gilberto Silva and Júlio Baptista.[18] He typically celebrates his goals by going to the corner flag and dancing a samba in front of fans, which he did when he scored his first Premier League goal for Arsenal. He is nicknamed the Brazilian Prince.

Statistics accurate as of 13 August 2011