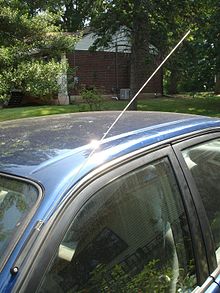 A whip antenna is an antenna consisting of a single straight flexible wire or rod, often mounted above some type of conducting surface called a ground plane.[1] The bottom end of the whip is connected to the radio receiver or transmitter. They are designed to be flexible so that they won't break off, and the name is derived from their whip-like motion when disturbed. Often whip antennas for portable radios are made of a series of interlocking telescoping metal tubes, so they can be retracted when not in use. They are the most common type of monopole antenna. These antennas are widely used for hand-held radios such as cell phones, cordless phones, walkie-talkies, FM radios, boom boxes, Wifi enabled devices, and GPS receivers, and also attached to vehicles as the antennas for car radios and two way radios for police, fire and aircraft.

The whip antenna can be considered half of a dipole antenna, and like a vertical dipole has an omnidirectional radiation pattern, radiating equal radio power in all azimuthal directions (perpendicular to the antenna's axis), with the radiated power falling off with elevation angle to zero on the antenna's axis. Vertical whip antennas are widely used for nondirectional radio communication on the surface of the Earth, where the direction to the transmitter (or the receiver) is unknown or constantly changing, for example in portable FM radio receivers, walkie-talkies, and two-way radios in vehicles. This is because they transmit (or receive) equally well in all horizontal directions, while radiating little radio energy up into the sky where it is wasted.

Whip antennas are normally designed as resonant antennas. Therefore the length of the whip antenna is determined by the wavelength of the radio waves used. The most common length is one-quarter of the wavelength, called a quarter-wave whip (although this type of antenna is often shortened by the use of a loading coil; see Electrically short whips below). For example, the common quarter-wave whip antennas used on FM radios in the USA are approximately 75 cm long, which is roughly one-quarter the length of radio waves in the FM radio band, which are 2.78 to 3.41 meters long. Half-wave whip antennas are also common.

If mounted above a perfect ground plane, a quarter wave whip has a gain twice (3 dB greater than) that of a half wave dipole, or 5.19 dBi, and a radiation resistance of 36.8 ohms. However without a ground plane the gain is reduced and the radiation resistance increased. Whips mounted on vehicles use the metal skin of the vehicle as a ground plane. In hand-held devices usually no explicit ground plane is provided, and the ground side of the antenna's feed line is just connected to the ground on the device's circuit board.[2] Therefore the radio itself, and possibly the user's hand, serves as a rudimentary ground plane. Since these are no larger than the size of the antenna itself, the combination of whip and radio often functions more as an asymmetrical dipole antenna than as a monopole. In stationary whip antennas, a "ground plane" consisting of several rods a quarter-wavelength long radiating horizontally from the base of the whip is often used. This type of antenna is called a ground plane antenna. [3] 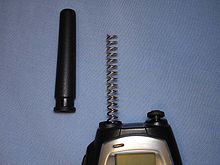 Whip antennas are very common in hand-held radios. This is a variation called a Rubber Ducky antenna on a handheld UHF CB transciever.

To reduce the length of a whip antenna to make it less cumbersome, an inductor (loading coil) is often added in series with it. This allows the antenna to be made much shorter than the normal length of a quarter-wavelength, and still be resonant. The coil is added at the base of the whip (called base-loaded) or occasionally in the middle (center-loaded). In the most widely-used form, the Rubber Ducky antenna, the loading coil is integrated with the antenna itself by making the whip out of a narrow helix of springy wire. The helix distributes the inductance along the antenna's length, improving the radiation pattern, and also makes it more flexible. Another alternative to shorten the antenna is to add a "capacity hat", a metal plate or screen, at the end. However all these electrically short whips have lower gain than a full length quarter-wave whip.

Multi-band operation is possible with coils at about one-half or one-third and two-thirds that do not affect the aerial much at the lowest band but create the effect of stacked dipoles at a higher band (usually x2 or x3 frequency).

At higher frequencies (2.4 GHz, but Military whips for 50 MHz to 80 MHz band exist, and are standard issue for the SINCGARS radio in the 30-88 MHz range), the feed coax can go up the centre of a tube. The insulated junction of the tube and whip is fed from the coax and the lower tube end where coax cable enters has an insulated mount. This kind of vertical whip is a full dipole and thus needs no ground plane. It generally works better several wavelengths above ground, hence the limitation normally to microwave bands.