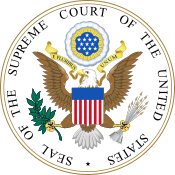 The Supreme Court of the United States handed down sixteen per curiam opinions during its 2005 term, which lasted from October 3, 2005 until October 1, 2006.[1]

Because per curiam decisions are issued from the Court as an institution, these opinions all lack the attribution of authorship or joining votes to specific justices. All justices on the Court at the time the decision was handed down are assumed to have participated and concurred unless otherwise noted.

The cases for this term are listed chronologically, noting the midterm change in the Court's membership caused by the retirement of Justice Sandra Day O'Connor and the confirmation of Justice Samuel Alito to her seat on January 31, 2006.