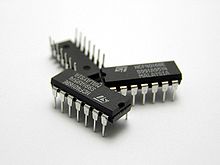 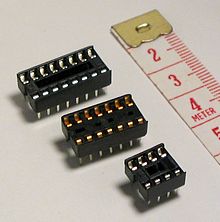 In microelectronics, a dual in-line package (DIP or DIL[1]) is an electronic device package with a rectangular housing and two parallel rows of electrical connecting pins. The package may be through-hole mounted to a printed circuit board or inserted in a socket.

A DIP is usually referred to as a DIPn, where n is the total number of pins. For example, a microcircuit package with two rows of seven vertical leads would be a DIP14. The photograph at the upper right shows three DIP14 ICs.

DIP connector plugs for ribbon cables are common in computers and other electronic equipment.

DIP header blocks on to which discrete components could be soldered were used where groups of components needed to be easily removed, for configuration changes, optional features or calibration.

The original dual-in-line package was invented by Bryant "Buck" Rogers in 1964 while working for Fairchild Semiconductor. The first devices had 14 pins and looked much like they do today.[2]. The rectangular shape allowed integrated circuits to be packaged more densely than previous round packages. [3] The package was well-suited to automated assembly equipment; a printed circuit board could be populated with scores or hundreds of ICs, then have all devices could be soldered at once on a wave soldering machine and passed on to automated testing machines, with very little human labor required. DIP packages were still large with respect to the integrated circuits within them. By the end of the 20th century, surface-mount packages allowed further reduction in the size and weight of systems. DIP chips are still popular for circuit prototyping on a breadboard because of how easily they can be inserted and utilized there.

DIPs were the mainstream of the microelectronics industry in the 1970s and 80s. Their use has declined in the first decade of the 21st century due to the emerging new surface-mount technology (SMT) packages such as plastic leaded chip carrier (PLCC) and small-outline integrated circuit (SOIC), though DIPs continued in extensive use through the 1990s, and still continue to be used substantially as the year 2011 passes. Because some modern chips are available only in surface-mount package types, a number of companies sell various prototyping adapters to allow those SMT devices to be used like DIP devices with through-hole breadboards and soldered prototyping boards (such as stripboard and perfboard). (SMT can pose quite a problem, at least an inconvenience, for prototyping in general; most of the characteristics of SMT that are advantages for mass production are difficulties for prototyping.)

For programmable devices like EPROMs and GALs, DIPs remained popular for many years due to their easy handling with external programming circuitry (i.e., the DIP devices could be simply plugged into a socket on the programming device.) However, with In-System Programming (ISP) technology now state of the art, this advantage of DIPs is rapidly losing importance as well. Through the 1990s, devices with fewer than 20 leads were manufactured in a DIP format in addition to the newer formats. Since about 2000, newer devices are often unavailable in the DIP format.

DIPs can be mounted either by through-hole soldering or in sockets. Sockets allow easy replacement of a device and eliminates the risk of damage from overheating during soldering. Generally sockets were used for high-value or large ICs, which cost much more than the socket. Where devices would be frequently inserted and removed, such as in test equipment or EPROM programmers, a zero insertion force socket would be used.

DIPs are also used with breadboards, a temporary mounting arrangement for education, design development or device testing. Some hobbyists, for one-off construction or permanent prototyping, use point-to-point wiring with DIPs, and their appearance when physically inverted as part of this method inspires the informal term "dead bug style" for the method. 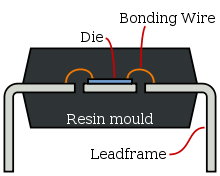 Side view of a dual in-line package (DIP) IC.

The body (housing) of a DIP containing an IC chip is usually made from molded plastic or ceramic. The hermetic nature of a ceramic housing is preferred for extremely high reliability devices. However, the vast majority of DIPs are manufactured via a thermoset molding process in which an epoxy mold compound is heated and transferred under pressure to encapsulate the device. Typical cure cycles for the resins are less than 2 minutes and a single cycle may produce hundreds of devices.

The leads emerge from the longer sides of the package along the seam, parallel to the top and bottom planes of the package, and are bent downward approximately 90 degrees (or slightly less, leaving them angled slightly outward from the centerline of the package body.) (The SOIC, the SMT package that most resembles a typical DIP, appears essentially the same, notwithstanding size scale, except that after being bent down the leads are bent upward again by an equal angle to become parallel with the bottom plane of the package.) In ceramic (CERDIP) packages, an epoxy or grout is used to hermetically seal the two halves together, providing an air and moisture tight seal to protect the IC die inside. Plastic DIP (PDIP) packages are usually sealed by fusing or cementing the plastic halves around the leads, but a high degree of hermeticity is not achieved because the plastic itself is usually somewhat porous to moisture and the process cannot ensure a good microscopic seal between the leads and the plastic at all points around the perimeter. However, contaminants are usually still kept out well enough that the device can operate reliably for decades with reasonable care in a controlled environment.

Inside the package, the lower half has the leads embedded, and at the center of the package is a rectangular space, chamber, or void into which the IC die is cemented. The leads of the package extend diagonally inside the package from their positions of emergence along the periphery to points along a rectangular perimeter surrounding the die, tapering as they go to become fine contacts at the die. Ultra-fine bond wires (barely visible to the naked human eye) are welded between these die periphery contacts and bond pads on the die itself, connecting one lead to each bond pad, and making the final connection between the microcircuits and the external DIP leads. The bond wires are not usually taut but loop upward slightly to allow slack for thermal expansion and contraction of the materials; if a single bond wire breaks or detaches, the entire IC may become useless. The top of the package covers all of this delicate assemblage without crushing the bond wires, protecting it from contamination by foreign materials.

Usually, a company logo, alphanumeric codes and sometimes words are printed on top of the package to identify its manufacturer and type, when it was made (usually as a year and a week number), sometimes where it was made, and other proprietary information (perhaps revision numbers, manufacturing plant codes, or stepping ID codes.)

The necessity of laying out all of the leads in a basically radial pattern in a single plane from the die perimeter to two rows on the periphery of the package is the main reason that DIP packages with higher lead counts must have wider spacing between the lead rows, and it effectively limits the number of leads which a practical DIP package may have. Even for a very small die with many bond pads (e.g. a chip with 15 inverters, requiring 32 leads), a wider DIP would still be required to accommodate the radiating leads internally. This is one of the reasons that four-sided and multiple rowed packages, such as PGAs, were introduced (around the early 1980s.)

A large DIP package (such as the DIP64 used for the Motorola 68000 CPU) has long leads inside the package between pins and the die, making such a package unsuitable for high speed devices.

Some other types of DIP devices are built very differently. Most of these have molded plastic housings and straight leads or leads that extend directly out of the bottom of the package. For some, LED displays particularly, the housing is usually a hollow plastic box with the bottom/back open, filled (around the contained electronic components) with a hard translucent epoxy material from which the leads emerge. Others, such as DIP switches, are composed of two (or more) plastic housing parts snapped, welded, or glued together around a set of contacts and tiny mechanical parts, with the leads emerging through molded-in holes or notches in the plastic. 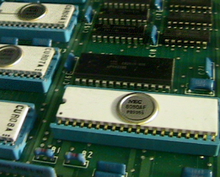 For EPROMs, which can be erased by UV light, some DIPs, generally ceramic CERDIPs, were manufactured with a circular window of clear quartz in the center of the top of the package, over the chip die. This enabled the packaged chips to be erased by UV irradiation in an EPROM eraser. Often, the same chips were also sold in less expensive windowless PDIP or CERDIP packages as one-time programmable (OTP) versions. (These were actually the same erasable chips, but there was no way to get UV radiation to them to erase them.) The same windowed and windowless packages were also used for microcontrollers, and perhaps other devices, containing EPROM memory; in this context, the OTP nature of the windowless versions was sometimes a needed requirement of the customer (i.e., to prevent their end users from modifying the stored information, which might include access control bits to disable read-out of proprietary code or factory test modes which were disabled after final test qualification.) Windowed CERDIP-packaged PROMs were used for the BIOS ROM of many early IBM PC clones (which were manufactured in limited enough quantities to make PROM an economical choice) often with a foil-backed (or regular paper) adhesive label covering the window to prevent inadvertent erasure through exposure to ambient light.

Molded plastic DIPs are much lower in cost than ceramic packages; one 1979 study showed that a plastic 14 pin DIP cost around US 6. 3 cents, and a ceramic package cost 82 cents. [5]

The former Soviet Union and Eastern bloc countries used similar packages, but with a metric inter-lead spacing of 2.5 mm rather than 2.54 mm (0.1 inch). 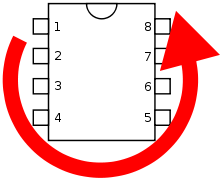 As shown in the diagram, leads are numbered consecutively from Pin 1. When the identifying notch in the package is at the top, Pin 1 is the top left corner of the device. Sometimes Pin 1 is identified with an indent or paint dot mark.

Some DIP devices, such as segmented LED displays, or those that replace leads with a heat sink fin, skip some leads; the remaining leads are numbered as if all positions had leads.

The SOIC (Small Outline IC), a surface-mount package which is currently very popular, particularly in consumer electronics and personal computers, is essentially a shrunk version of the standard IC PDIP, the fundamental difference which makes it an SMT device being a second bend in the leads to flatten them parallel to the bottom plane of the plastic housing. The SOJ (Small Outline J-lead) and other SMT packages with "SOP" (for "Small Outline Package") in their names can be considered further relatives of the DIP, their original ancestor.

Pin grid array (PGA) packages may be considered to have evolved from the DIP. PGAs with the same 0.1 inch pin centers as most DIPs were popular for microprocessors from the early-mid 1980s through the 1990s. Owners of personal computers containing Intel 80286 through P5 Pentium processors may be most familiar with these PGA packages, which were often inserted into ZIF sockets on motherboards. The similarity is such that a PGA socket may be physically compatible with some DIP devices, though the converse is rarely true.