Concrete and metal rebar used to build a floor

Building material is any material which is used for a construction purpose. Many naturally occurring substances, such as clay, sand, wood and rocks, even twigs and leaves have been used to construct buildings. Apart from naturally occurring materials, many man-made products are in use, some more and some less synthetic. The manufacture of building materials is an established industry in many countries and the use of these materials is typically segmented into specific specialty trades, such as carpentry, plumbing, roofing and insulation work. They provide the make-up of habitats and structures including homes.

The tent is the home of choice among nomadic groups all over the world. Two well known types include the conical teepee and the circular yurt. It has been revived as a major construction technique with the development of tensile architecture and synthetic fabrics. Modern buildings can be made of flexible material such as fabric membranes, and supported by a system of steel cables, rigid or internal (air pressure.)

The amount of each material used leads to different styles of buildings. The deciding factor is usually connected with the quality of the soil being used. Larger amounts of clay usually mean using the cob/adobe style, while low clay soil is usually associated with sod building. The other main ingredients include more or less sand/gravel and straw/grasses. Rammed earth is both an old and newer take on creating walls, once made by compacting clay soils between planks by hand, now forms and mechanical pneumatic compressors are used.

Soil and especially clay is good thermal mass; it is very good at keeping temperatures at a constant level. Homes built with earth tend to be naturally cool in the summer heat and warm in cold weather. Clay holds heat or cold, releasing it over a period of time like stone. Earthen walls change temperature slowly, so artificially raising or lowering the temperature can use more resources than in say a wood built house, but the heat/coolness stays longer.

Peoples building with mostly dirt and clay, such as cob, sod, and adobe, resulted in homes that have been built for centuries in western and northern Europe as well as the rest of the world, and continue to be built, though on a smaller scale. Some of these buildings have remained habitable for hundreds of years.

A natural material for building dwellings for thousands of years, wood was also used to make Churches in the past. The main problems with wood structures are fire risk and durability. Wood is an aesthetically pleasing material that never goes out of trend completely, though the current popularity of plastic is taking its place in many construction sites.

Rock structures have existed for as long as history can recall. It is the longest lasting building material available, and is usually readily available. There are many types of rock throughout the world all with differing attributes that make them better or worse for particular uses. Rock is a very dense material so it gives a lot of protection too, its main draw-back as a material is its weight and awkwardness. Its energy density is also considered a big draw-back, as stone is hard to keep warm without using large amounts of heating resources.

Dry-stone walls have been built for as long as humans have put one stone on top of another. Eventually different forms of mortar were used to hold the stones together, cement being the most commonplace now.

The granite-strewn uplands of Dartmoor National Park, United Kingdom, for example, provided ample resources for early settlers. Circular huts were constructed from loose granite rocks throughout the Neolithic and early Bronze Age, and the remains of an estimated 5,000 can still be seen today. Granite continued to be used throughout the Medieval period (see Dartmoor longhouse) and into modern times. Slate is another stone type, commonly used as roofing material in the United Kingdom and other parts of the world where it is found.

Mostly stone buildings can be seen in most major cities, some civilizations built entirely with stone such as the Pyramids in Egypt, the Aztec pyramids and the remains of the Inca civilization.

Thatch is one of the oldest of building materials known; grass is a good insulator and easily harvested. Many African tribes have lived in homes made completely of grasses year round. In Europe, thatch roofs on homes were once prevalent but the material fell out of favor as industrialization and improved transport increased the availability of other materials. Today, though, the practice is undergoing a revival. In the Netherlands, for instance, many new buildings have thatched roofs with special ridge tiles on top. 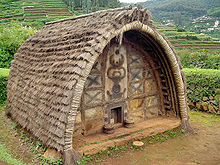 Brush structures are built entirely from plant parts and are generally found in tropical and sub-tropical areas, such as rainforests, where very large leaves can be used in the building. Native Americanes for resting and living in, too. These are built mostly with branches, twigs and leaves, and bark, similar to a beaver's lodge. These were variously named wikiups, lean-tos, and so forth.

Ice was used by the Inuit for igloos, but has also been used for ice hotels as a tourist attraction in northern areas that might not otherwise see many winter tourists.

Used with cement and sometimes lime, to make mortar for masonry work and plaster. Sand is used as a part of the concrete mix. 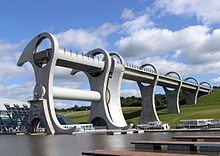 Concrete is a composite building material made from the combination of aggregate and a binder such as cement. The most common form of concrete is Portland cement concrete, which consists of mineral aggregate (generally gravel and sand), portland cement and water. After mixing, the cement hydrates and eventually hardens into a stone-like material. When used in the generic sense, this is the material referred to by the term concrete.

For a concrete construction of any size, as concrete has a rather low tensile strength, it is generally strengthened using steel rods or bars (known as rebars). This strengthened concrete is then referred to as reinforced concrete. In order to minimise any air bubbles, that would weaken the structure, a vibrator is used to eliminate any air that has been entrained when the liquid concrete mix is poured around the ironwork. Concrete has been the predominant building material in this modern age due to its longevity, formability, and ease of transport. Recent advancements, such as Insulating concrete forms, combine the concrete forming and other construction steps (installation of insulation). All materials must be taken in required proportions as described in standards. 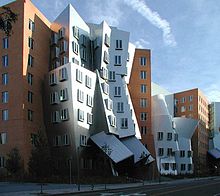 Metal is used as structural framework for larger buildings such as skyscrapers, or as an external surface covering. There are many types of metals used for building. Steel is a metal alloy whose major component is iron, and is the usual choice for metal structural building materials. It is strong, flexible, and if refined well and/or treated lasts a long time. Corrosion is metal's prime enemy when it comes to longevity.

The lower density and better corrosion resistance of aluminium alloys and tin sometimes overcome their greater cost. Brass was more common in the past, but is usually restricted to specific uses or specialty items today.

Metal figures quite prominently in prefabricated structures such as the Quonset hut, and can be seen used in most cosmopolitan cities. It requires a great deal of human labor to produce metal, especially in the large amounts needed for the building industries.

Other metals used include titanium, chrome, gold, silver. Titanium can be used for structural purposes, but it is much more expensive than steel. Chrome, gold, and silver are used as decoration, because these materials are expensive and lack structural qualities such as tensile strength or hardness. 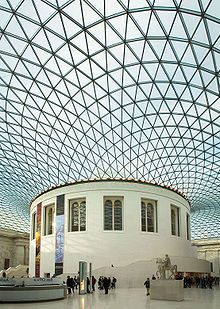 Glassmaking is considered an art form as well as an industrial process or material.

Clear windows have been used since the invention of glass to cover small openings in a building. They provided humans with the ability to both let light into rooms while at the same time keeping inclement weather outside. Glass is generally made from mixtures of sand and silicates, in a very hot fire stove called a kiln and is very brittle. Very often additives are added to the mixture when making to produce glass with shades of colors or various characteristics (such as bulletproof glass, or light emittance).

The use of glass in architectural buildings has become very popular in the modern culture. Glass "curtain walls" can be used to cover the entire facade of a building, or it can be used to span over a wide roof structure in a "space frame". These uses though require some sort of frame to hold sections of glass together, as glass by itself is too brittle and would require an overly large kiln to be used to span such large areas by itself.

The term plastics covers a range of synthetic or semi-synthetic organic condensation or polymerization products that can be molded or extruded into objects or films or fibers. Their name is derived from the fact that in their semi-liquid state they are malleable, or have the property of plasticity. Plastics vary immensely in heat tolerance, hardness, and resiliency. Combined with this adaptability, the general uniformity of composition and lightness of plastics ensures their use in almost all industrial applications today. 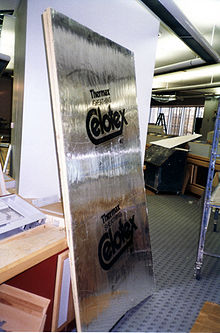 Foamed plastic sheet to be used as backing for firestop mortar at CIBC bank in Toronto.

More recently synthetic polystyrene or polyurethane foam has been used in combination with structural materials, such as concrete. It is light weight, easily shaped and an excellent insulator. It is usually used as part of a structural insulated panel where the foam is sandwiched between wood or cement or insulating concrete forms, where concrete is sandwiched between two layers of foam.

Cement bonded composites are made of hydrated cement paste that binds wood or alike particles or fibers to make pre-cast building components. Various fiberous materials including paper and fiberglass have been used as binders.

Wood and natural fibres are composed of various soluble organic compounds like carbohydrates, glycosides and phenolics. These compounds are known to retard cement setting. Therefore, before using a wood in making cement boned composites, its compatibility with cement is assessed.

Wood-cement compatibility is the ratio of a parameter related to the property of a wood-cement composite to that of a neat cement paste. The compatibility is often expressed as a percentage value. To determine wood-cement compatibility, methods based on different properties are used, such as, hydration characteristics, strength, interfacial bond and morphology. Various methods are used by researchers such as the measurement of hydration characteristics of a cement-aggregate mix;[1][2][3] the comparison of the mechanical properties of cement-aggregate mixes[4][5] and the visual assessment of microstructural properties of the wood-cement mixes.[6] It has been found that the hydration test by measuring the change in hydration temperature with time is the most convenient method. Recently, Karade et al.[7] have reviewed these methods of compatibility assessment and suggested a method based on the ‘maturity concept’ i.e. taking in consideration both time and temperature of cement hydration reaction.

Modern building is a multibillion dollar industry, and the production and harvesting of raw materials for building purposes is on a world wide scale. Often being a primary governmental and trade keypoint between nations. Environmental concerns are also becoming a major world topic concerning the availability and sustainability of certain materials, and the extraction of such large quantities needed for the human habitat.

It also can refer to items used to put such hardware together such as glues, caulking, paint, and anything else bought for the purpose of constructing a building.