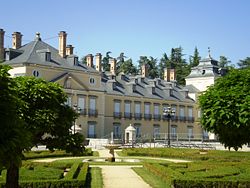 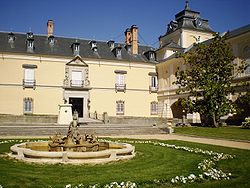 Lateral facade of the palace, both with the Patio de los Austrias.

The Royal Palace of El Pardo (Spanish: Palacio Real de El Pardo) is a historical building near Madrid, Spain, in the present-day district of Fuencarral-El Pardo. Owned by the Spanish state and administered by the Patrimonio Nacional agency, the palace began as a hunting lodge.

It became an alternative residence of the kings of Spain until Alfonso XII, who died in the palace in 1885.

King Henry III of Castile ordered the building of the pavilion in 1406, on Mount El Pardo, because of its abundant game. Later, in the time of Charles V (1547), it was transformed into a palace. On 13 March 1604, a massive fire destroyed many of the paintings, including masterpieces by Titian. Charles III renovated the building in the 18th century, appointing his architect Francesco Sabatini for the job. It was newly transformed in the 20th century, doubling its size by repeating to the east its original structure.

The interior decoration includes a ceiling frescoed by Gaspar Becerra, and paintings by Vincenzo Carducci and Cabrera.

In 1739 the palace hosted talks between the governments of Britain and Spain, who eventually agreed the Convention of Pardo in a bid to avert a war. However, the Convention failed to prevent war breaking out shortly afterwards.

Francisco Franco lived in the palace after the Spanish Civil War. After Franco's death, it has been used as a residence for visiting heads of state.

The Palace of Zarzuela forms part of the complex of residences at the site.