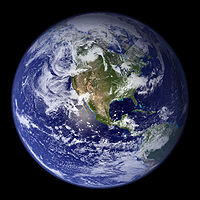 Biomes are climatically and geographically defined as similar climatic conditions on the Earth, such as communities of plants, animals, and soil organisms,[1] and are often referred to as ecosystems. Some parts of the earth have more or less the same kind of abiotic and biotic factors spread over a large area creating a typical ecosystem over that area. Such major ecosystems are termed as biomes. Biomes are defined by factors such as plant structures (such as trees, shrubs, and grasses), leaf types (such as broadleaf and needleleaf), plant spacing (forest, woodland, savanna), and climate. Unlike ecozones, biomes are not defined by genetic, taxonomic, or historical similarities. Biomes are often identified with particular patterns of ecological succession and climax vegetation (quasi-equilibrium state of the local ecosystem). An ecosystem has many biotopes and a biome is a major habitat type. A major habitat type, however, is a compromise, as it has an intrinsic inhomogeneity.

The biodiversity characteristic of each extinction, especially the diversity of fauna and subdominant plant forms, is a function of abiotic factors and the biomass productivity of the dominant vegetation. In terrestrial biomes, species diversity tends to correlate positively with net primary productivity, moisture availability, and temperature.[2]

Ecoregions are grouped into both biomes and ecozones.

A fundamental classification of biomes is:

Biomes are often known in English by local names. For example, a temperate grassland or shrubland biome is known commonly as steppe in central Asia, prairie in North America, and pampas in South America. Tropical grasslands are known as savanna in Australia, whereas in Southern Africa it is known as certain kinds of veld (from Afrikaans).

Sometimes an entire biome may be targeted for protection, especially under an individual nation's Biodiversity Action Plan.

Climate is a major factor determining the distribution of terrestrial biomes. Among the important climatic factors are:

The most widely used systems of classifying biomes correspond to latitude (or temperature zoning) and humidity. Biodiversity generally increases away from the poles towards the equator and increases with humidity.

Biome classification schemes seek to define biomes using climatic measurements. Particularly in the 1970s and 1980s there was a significant push to understand the relationships between these measurements and properties of ecosystem energetics because such discoveries would enable the prediction of rates of energy capture and transfer among components within ecosystems. Such a study was conducted by Sims et al. (1978) on North American grasslands. The study found a positive logistic correlation between evapotranspiration in mm/yr and above ground net primary production in g/m^2/yr. More general results from the study were that precipitation and water use lead to aboveground primary production, solar radiation and temperature lead to belowground primary production (roots), and temperature and water lead to cool and warm season growth habit.[3] These findings help explain the categories used in Holdridge’s bioclassification scheme, which were then later simplified in Whittaker’s. The number of classification schemes and the variety of determinants used in those schemes, however, should be taken as a strong indicator that biomes do not all fit perfectly into the classification schemes created.

The Holdridge classification scheme was developed by L. R. Holdridge, a botanist. It maps climates based on four categories:

In this scheme, climates are classified based on the biological effects of temperature and rainfall on vegetation under the assumption that these two abiotic factors are the largest determinants of the type of vegetation found in an area. Holdridge uses the 4 axis to define 30 so called "humidity provinces," which are clearly visible in the Holdridge diagram. While the scheme largely ignores soil and sun exposure, Holdridge did acknowledge that these, too, were important factors in biome determination.

Whittaker appreciated biome-types as a representation of the great diversity of the living world, and saw the need to establish a simple way to classify these biome-types. Whittaker based his classification scheme on two abiotic factors: Precipitation and Temperature. His scheme can be seen as a simplification of Holdridge's, one more readily accessible, but perhaps missing the greater specificity that Holdrige's provides.

Whittaker based his representation of global biomes on both previous theoretical assertions as well as an ever increasing empirical sampling of global ecosystems. Whittaker was in a unique position to make such a holistic assertion as he had previously compiled a review of biome classification.[4]

The Whittaker Classification Scheme can be viewed at the following address: here

Whittaker's distinction between biome and formation can be simplified: formation is used when applied to plant communities only, while biome is used when concerned with both plants and animals. Whittaker's convention of biome-type or formation-type is simply a broader method to categorize similar communities.[5] The world biome-types, as displayed on a world map, can be viewed at the following link: here

Whittaker, seeing the need for a simpler way to express the relationship of community structure to the environment, used what he called “gradient analysis” of ecocline patterns to relate communities to climate on a worldwide scale. Whittaker considered four main ecoclines in the terrestrial realm.[6]

Along these gradients, Whittaker noted several trends that allow him to qualitatively establish biome-types.

The Heinrich Walter classification scheme was developed by Heinrich Walter, a German ecologist. It differs from both the Whittaker and Holdridge schemes because it takes into account the seasonality of temperature and precipitation. The system, also based on precipitation and temperature, finds 9 major biomes, with the important climate traits and vegetation types summarized in the accompanying table. The boundaries of each biome correlate to the conditions of moisture and cold stress that are strong determinants of plant form, and therefore the vegetation that defines the region. Extreme conditions, such as flooding in a swamp, can create different kinds of communities within the same biome.

Robert G. Bailey almost developed a biogeographical classification system for the United States in a map published in 1976. Bailey subsequently expanded the system to include the rest of South America in 1981 and the world in 1989. The Bailey system is based on climate and is divided into seven domains (Polar, Humid Temperate, Dry, Humid, and Humid Tropical), with further divisions based on other climate characteristics (subarctic, warm temperate, hot temperate, and subtropical; marine and continental; lowland and mountain).[7]

A team of biologists convened by the World Wide Fund for Nature (WWF) developed an ecological land classification system that identified fourteen biomes,[8] called major habitat types, and further divided the world's land area into 867 terrestrial ecoregions. Each terrestrial Ecoregion has a specific EcoID, fomat XXnnNN (XX is the Ecozone, nn is the Biome number, NN is the individual number). This classification is used to define the Global 200 list of ecoregions identified by the WWF as priorities for conservation. The WWF major habitat types are:

According to the World Wildlife Fund, the following are classified as freshwater biomes:[9]

Humans have fundamentally altered global patterns of biodiversity and ecosystem processes. As a result, vegetation forms predicted by conventional biome systems are rarely observed across most of Earth's land surface. Anthropogenic biomes provide an alternative view of the terrestrial biosphere based on global patterns of sustained direct human interaction with ecosystems, including agriculture, human settlements, urbanization, forestry and other uses of land. Anthropogenic biomes offer a new way forward in ecology and conservation by recognizing the irreversible coupling of human and ecological systems at global scales and moving us toward an understanding how best to live in and manage our biosphere and the anthropogenic biosphere we live in. The main biomes in the world are freshwater, marine, coniferous, deciduous, ice, mountains, boreal, grasslands, tundra, and rainforests.

The Endolithic biome, consisting entirely of microscopic life in rock pores and cracks, kilometers beneath the surface, has only recently been discovered and does not fit well into most classification schemes. 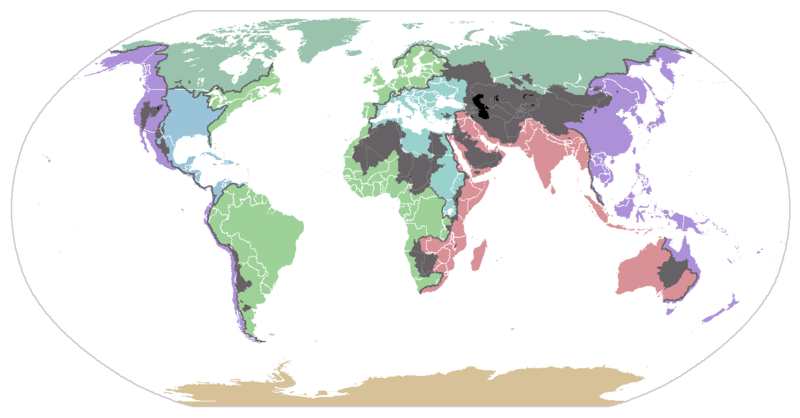 Drainage basins of the principal oceans and seas of the world. Grey areas are endorheic basins that do not drain to the ocean.